Home to over a million animals, Africa is undoubtedly the best place to visit if you have an interest in animals. Most visitors go on a safari, and it’s universally agreed upon that encountering the safari animals up close is magical. This article will tell you all about the African Safari Animals. The most popular animals on a safari are the Big 5, notably; the lion, leopard, rhino, buffalo and elephant. For the first time goer, spotting them can be an incredibly rewarding experience- but remember, that’s not it! The grasslands and savanna plains of Africa are full of a rich variety of other wildlife too. If you’re wondering what they might be, and where you’re most likely to spot them- keep reading to find out!

The most majestic of the beasts you will ever see, the African lion is also the top carnivore of the continent. Lions live in packs, called prides, and consist of more females than males. This is because the lionesses are the ones who do the most hunting! Male lions sleep for over 20 hours a day, to conserve energy. Males have a thick mane that protects them while fighting. Lions are most active at night when it is cooler. Because of this, you’ll most likely see lions when they are resting.

The best safaris to see lions are in South Africa, Botswana, and Tanzania. The Kruger National Park in South Africa is the continent’s largest animal reserve. Here, the density of the number of animals is high, and most visitors will get the chance to spot lions. The Okavango Delta is a swampy delta in northern Botswana. Its location makes it tricky to reach by water, so visitors arrive by aircraft. Apart from its unusual location, the lions of Okavango make the place even more special. They are the only known lions to voluntarily rage fights with buffalos!

Also Read: Why wild animals should not be pets?

The largest land mammal on the planet, elephants are highly intelligent animals. Research says that they possess incredibly memory power and never forget. Unlike lions, elephants live in matriarchal groups and a female leads them. They consume over 300 pounds/136 kg of vegetation- including bamboos, sugarcane and maize- each day. There are 2 subspecies of elephants; forest elephants and Savannah elephants. The latter is the one you’ll see on a safari. 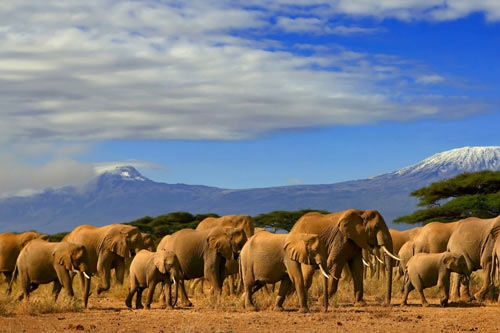 Once again, South Africa’s Kruger National Park is the place to go if you want to see the elephant. Please note that this park consists of all of the Big 5 in large numbers, so spotting them is quite easy. Apart from this, The Addo Elephant National Park boasts the largest number of elephants in one location.

The cheetah can reach speeds of up to 75 miles/hour and are easily the fastest land mammals in the world. They are smaller in size than lions and leopards, and this is probably the secret of their speed. They stalk their prey for large distances, without the prey even noticing, and jump on them when they are close enough. Unfortunately, most of the time large animals like lion steal their kill. 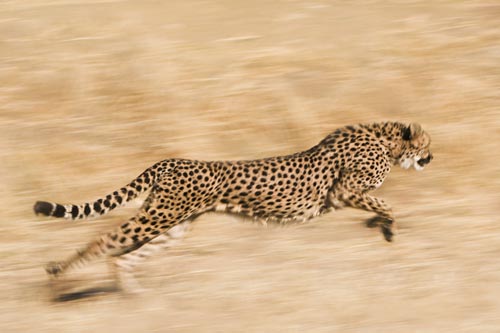 The Okavango Delta comes into the picture, here again, cheetahs are fairly common here. Botswana also hosts the Kwando Reserves and the Linyanti Reserve, both having a good number of cheetahs each. There is also Masai Mara National Park in Kenya, which is known for its considerably lower price ranges for a safari visit.

Often referred to as one of the “Ugly Five”, hyenas may not seem like the most magnificent looking creatures. But beauty standards are not as important in the animal kingdom as eating standards are- and in that respect, hyenas rank high. They eat almost anything- from lizards to zebras to fish- naturally, this eating habit makes the hyenas one of the least endangered animals. They live in packs and females lead them- who are much larger and stronger than males. 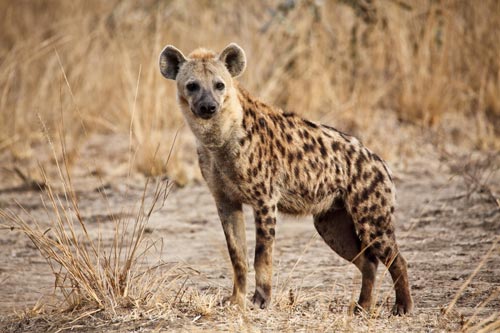 The Southern Namibian desert holds brown hyenas, so it’s a must-go if you’re interested in animals of unconventional colours. The Serengeti National Park in Tanzania also has hyenas- notably the spotted hyena, also known as the laughing hyena. South Africa isn’t home to many hyenas- so better don’t visit if you especially want to see hyenas.

People often debate about what colour a zebra is. Some say they are white with black stripes, and on the other hand, some say they’re black with white stripes! The truth is, that zebras are black with white stripes. They have fascinating modes of communication, such as widening of eyes and baring teeth. Zebras are often preyed on by animals such as hyenas and lions, but even a single kick can kill the strongest of these beasts.

The Buffalo Springs Nature Reserve in Kenya has over 2000 zebras for visitors to see. This park has safari parks and lodges, and is not as busy and crowded as other safaris. In southwest Ethiopia, lies the Nechisar National Park, which is regarded as the most beautiful safari in entire East Africa.

One of the most endangered animals in Africa, sighting the mountain gorilla will be an incredibly lucky experience. There are less than a thousand of them remaining in the world, and most of them live in Uganda, Rwanda and the Republic of Congo. Gorillas are the largest primates on the planet, and the biggest ones weigh up to 180 kgs. Their diet composes of leaves, herbs, shoots, and a few insects. 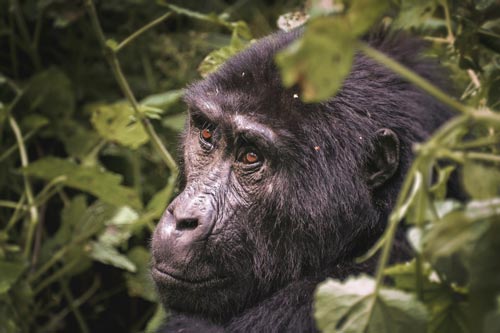 Unlike the other animals on this list, you will not see a gorilla on a safari trip. To see them, you need to pay extra and have a permit to visit the forest regions. In Uganda, you can see them at the Bwindi Impenetrable Forest and the Mgahinga Gorilla National Park. In Rwanda, gorillas can be sighted at Volcanoes National Park.

Ostriches are among the only few flightless birds in the world. With their powerful legs, a kick from an ostrich can be deadly. These birds live in herds, led by one male and a female ostrich. The other ostriches of the herd put their eggs- which are the largest in the world- in the dominant ostriches’ nest. It is a popular notion that these birds bury their heads in the sand- but it is false and just a myth. Ostriches are farmed across the world, mainly for meat and eggs. 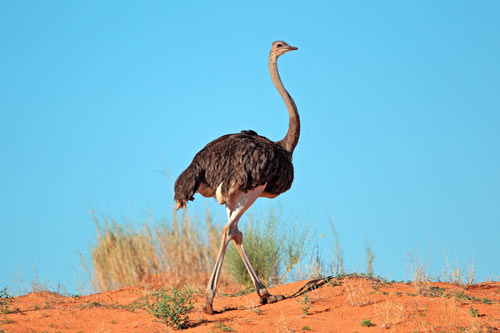 They can be seen in safaris across all of Africa. They are found in Kenya’s Amboseli National Park, the Masai Mara National Park and Samburu National Reserve.

This bird got its unusual name back in the 1800s when the Europeans first discovered it. They thought the black tailcoat and the bird’s black knee britches gave it the impression of an office clerk! Secretary birds are vultures’ relatives. They also have a very strange technique of killing their prey. They stomp on the animal with its legs with brutal force until it dies, and then swallow it completely in one go. Snakes and small reptiles are usually the victims of this barbaric bird. 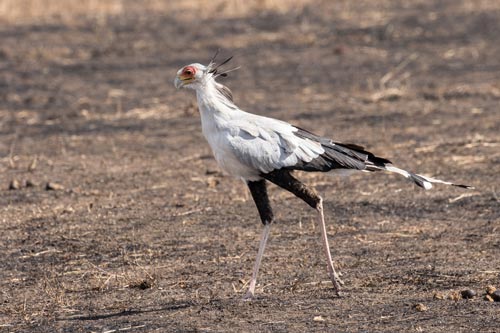 Secretary birds are very common and can be seen in open grasslands. You can spot them in South Africa’s Kruger National Park, and Botswana’s Kwando Reserves.

There are many more African safari animals and these are just few of them. If you like this article, share it with your friends and family members.