Both air and water pollution are severe issues in England. According to a report, in 2019, there were between 28,000 to 36,000 deaths through prolonged exposure to air pollution in England. This shows that we are highly susceptible to the impacts caused by such environmental issues. 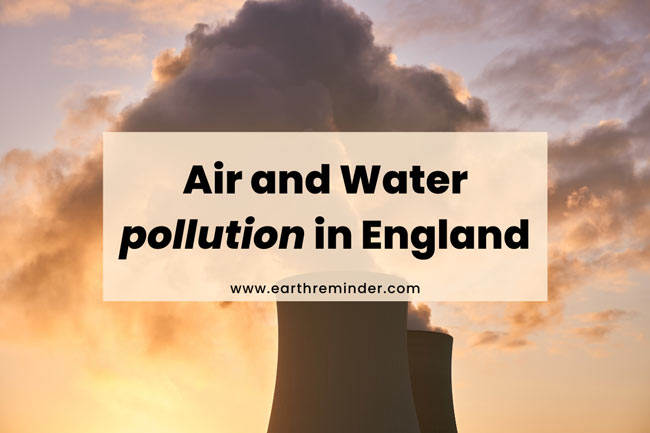 Furthermore, a name is given to the polluted water bodies – chemical cocktail – as the water is mixed with agricultural waste, sewage, and plastic.

So, it’s an essential factor to consider and know how to take better initiatives for our future generations. Today, we will grasp the extremities of air and water pollution in England with some instances. So, let’s get started!

According to a report, air pollution is the fourth most deadly cause of death in England after cancer, cardiovascular diseases, and obesity. And this costs us both health and money.

Causes of Air pollution in England

We generally have more ammonia due to agricultural production—carbon monoxide, ozone, and other harmful gas from automobiles and industries.

Other than that, the significant quality of smoke contributes to the air pollution in England due to particulate matter. The combustion of wood in home heaters is the primary source of their production.

There is exposure to particulate matter, volatile organic compounds, oxides of nitrogen, and sulfur dioxide from automobiles. And that is why the most susceptible people are advised less to breathe such air.

Effects of Air Pollution in England

According to some studies on the health impact of particulate matter, PM2.5 is highly hazardous to our health. This enters our respiratory tract and can get stuck in our lungs, causing respiratory illness.

Furthermore, these matters create problems in other organs like the brain and heart. To understand the impacts and measure the different particles in the air, a National Atmospheric Emission Inventory (NAEI) is working.

Also, after being released from different sources, the pollutants could travel a long distance. And soon, they either deposit on soil or water after mixing with other atmospheric substances. So, air pollutants are not just hazardous to the humans of a particular place but also affect other living and nonliving components of the same or different regions.

There are some instances of such factors. The dust storms rise in deserts, and dry areas (especially in the Sahara) travel longer to mix with the air of England, contributing to its pollution rate. Another example is “acid rain.” After mixing with the rainwater, the atmospheric sulfur, and carbon form sulfuric and carbonic acid. And sulfuric acid is one of the most hazardous acid forms that is enough to break intricate and beautiful structures.

To reduce air pollution in England, the UK government has taken several initiatives to work till 2030.

Also Read: How Does Air Pollution Affect the Animals?

Water pollution is another important environmental issue to consider in England. As per the study, there are no such rivers and lakes in England which don’t contain contaminants.

There is a mixture of several pollutants like sewage slurry, micro-plastics, car tires, oils, and wet wipes. It is given the name “chemical cocktail.” The situation seems funny and severe simultaneously for ongoing and upcoming hazards.

Causes of Water Pollution in England

If we talk about the causes of water pollution in England, the following are the major causes.

As per the research and analysis of the UK government, about 40% of water pollutants are the results of rural land management and agriculture. Further, the same report states that 35% of pollution is from water industries, and the urban and transport sector contributes only 18%.

This indicates that excessive pesticides, herbicides, and fertilizers for improved crop production are the primary source of contamination. Further, according to an analysis, detergent usage is the primary cause (5-10%) of phosphate pollution in water bodies.

Oil spillage is another major cause of pollution that contributes to 3,000 pollution incidents every year in England and Wales.

Effects of water pollution in England

And what are the effects of the vast chemical cocktail in England?

According to wildlife trust, we have lost 90% of our habitats in wetlands in the past ten decades. Through increased water pollution scenarios in England, 10% of our wetland and freshwater species have been threatened and extinct.

Furthermore, the oil contamination blocks the sunlight from reaching the underwater species, impacting the entire aquatic ecosystem. Birds and other aquatic organisms consume some oil and cause hazardous health problems like low birth rates, increased mortality, etc. The bio-accumulation of such pollutants travels longer inside the food web, affecting higher levels of organisms on the food chain.

Understanding the severity level can only help us take better action towards preventing our water bodies from such toxic substances.

Government of England Initiatives to Prevent Air and Water Pollution

Some of the initiatives taken by the government of England are as follows;

We should take preventive measures to remove the existing pollutants from our environment and remove future consequences of such issues.

Moreover, a healthy environment can be possible with our dedication and determination towards fulfilling our aims towards air and water pollution issues in England.

How Do Oil Spills Affect the Environment?

How Do Wildfires Affect the Environment?