If you are someone who belongs to Australia or wants to gather knowledge and information about it, this article is for you. Today, we will be discussing all the information regarding air pollution in Australia. 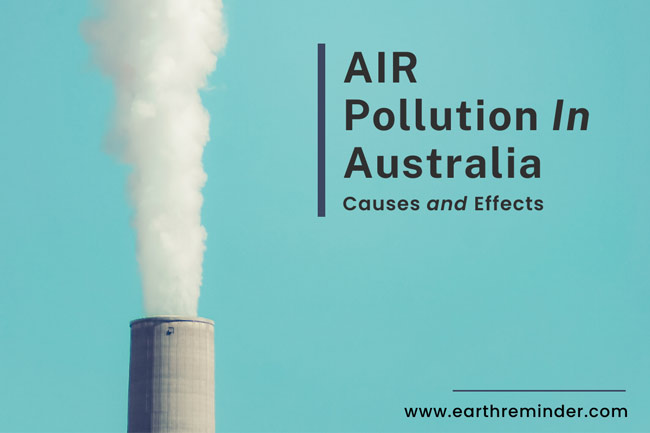 Based on a report by World Health Organization (WHO), there are 6.4 million deaths worldwide every year that are resulted from air pollution. This makes us think about the air pollution scenarios in Australia.

According to the IQAir.com site, Australia’s air quality average in 2021 was 23 on the air quality index, which is considered good. Also, the most polluted city today is Coonabarabran in New South Wales, and the cleanest city in Australia is the Emu River in Tasmania.

Furthermore, Australia ranked 109 among the worst air quality countries in 2021. This is pretty down on the list. So, you can assume that Australia is one of the cleanest countries in the world.

However, there are still some cases of air pollution emerging every year. And here, we will try to understand them.

What Causes Air Pollution in Australia?

However, we cannot control the impact of the biogenic or geogenic causes. And the major anthropogenic causes of air pollution in Australia include automobiles, industries, and domestic and commercial activities. Dust storms and bushfires mainly cause periodical worst-case air pollution.

The former reason for air pollution is quite common in every city globally. However, the latter were exclusive to some regions, including Australia. The primary air pollutants include particulate matter (less than 2.5 millimetres and less than 10 millimetres), volatile organic compounds, carbon monoxide, lead and compounds, oxides of nitrogen, and sulfur dioxide. 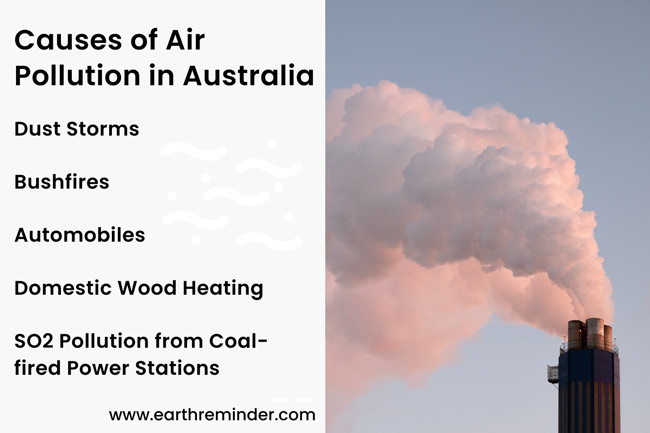 Let us discuss each source of air pollution in Australia briefly:

As per IQAir, automobiles and road traffic are the major contributors to air pollution in urban areas. This is further because Australia holds a position as one of the largest vehicle ownership countries – 90% of the population, to be exact. This can be reduced through some conscious efforts.

SO2 Pollution from Coal-fired Power Stations

Coal-fired power stations are the primary type of industrial pollutant source in Australia. However, the concentration is relatively lower than in the USA and other European countries. Still, Sulfur dioxide is the primary component released from such plants, which has a significant impact on public health.

According to a report, the sulfur dioxide content in the air is about 11 times higher than the recommended concentration by the World health organization.

The same report found that Victoria’s Latrobe Valley and NSW’s Lake Macquarie region are significant contributors to SO2 emissions in Australia, and this amount is responsible for about 4000 premature deaths on an annual basis, which is quite significant.

The air pollution in Australia further varies from season to season. During winters, the particulate matter in the air rises significantly. The cause for this is domestic wood heating. It contributes about 51% of air pollution during this time. It provides warmth on the winter days and nights. Such usage is exceptionally high on winter weekend days.

For instance, the contribution is higher in Muswellbrook, New South Wales, in 2012, with about 62% of air pollutants from domestic wood heating.

Dry areas and deserts are the source point of dust storms. Dust storms cause various problems to the population and need to be considered seriously.

Another cause of the occasional surge in air pollution in Australia is Bushfires. During the dark summer bushfire, there was a significant rise in contaminants in the air causing severe health damage to the nearby regions. Bushfire seems like a natural cause of air pollution. However, human activities like deforestation affect it severely.

Dry and hot atmospheric conditions during summer cause major wildfire events – responsible for extreme air pollution. We will discuss some effects of the bushfires later. However, the significant impact on health is due to a higher quantity of PM2.5 particulate matter, which, after entering the lungs, stacks and causes respiratory diseases.

Also Read: How Do Wildfires Affect the Environment?

There are other reasons for air pollution in Australia, including emissions from plants and wave spray from the oceans. However, these contribute a small number of pollutants to the air.

Effects of Air Pollution in Australia

The primary effects of air pollution in Australia include the following;

There are some worst-case scenarios of air pollution in Sydney, Australia. Currently, Sydney has a moderate amount of air quality. The short-term events of dust storms and bushfires are two major air pollution causes in this area.

Further, some studies indicate about 1.6-2.9% increased mortality rate due to the air pollution cases in Sydney, Australia.

Sydney is quite famous for regular bushfire events, especially during summers. Yet, the August 2019-February 2020 black summer fire event has reached the extremities. Besides the premature death by cardiovascular and respiratory diseases, the PM2.5 level has increased to 400 microgram/m3 – 40 times higher than the level recommended by WHO.

Also Read: How Does Air Pollution Affect the Animals?

However, different initiatives were working to reduce the impact of air pollution in this state.

How to Reduce the Air Pollution Cases in Australia?

The following measures can be taken to reduce the air pollution cases in Australia.

People can consider public transport systems for air pollution caused by vehicles and road traffic. This will diminish the number of vehicles on the road and the concentration of air pollutant emissions. Further, walking or bicycling are good ways to reduce air pollution issues in Australia and improve physical activity.

The pollution from wood heaters can be reduced by starting the wood heaters right away rather than burning them long before the requirement. You can further consider using dry, untreated, and seasoned wood. Be a little patient and let the fire catch before adding more fuel. Also, you should avoid overloading and use small or medium size woods.

Furthermore, national and local measures and initiatives were taken from 1998, which are working great to measure the air quality and study the impact of different hazards.

If you like this article on air pollution in Australia, please share it with your friends and family members.

How to Write an Informative Essay on Nature?