Arctic Ecosystem: Vast expanses of ice, as far as eyes can see, stormy winds whipping over the ice cover and the blood-freezing temperatures – welcome to the Arctic Ocean. Situated at the extreme end of our planet, the North pole, the Arctic Ocean, with only 14 million square kilometers of the area, is the smallest and the shallowest ocean on Earth. The Arctic area experiences some of the most extreme weather conditions on our planet, with temperatures plummeting way below zero and the landscape plunging to total darkness during the winter. One may think that life would be impossible in such extreme conditions, but the amazing Arctic Ocean is full of diverse ecosystems teeming with life.

Why Is the Arctic Called the Land of The Midnight Sun?

The midnight sun is a natural phenomenon in which the Sun does not go down the horizon. It means it does not set. The sun does reach the tip of the horizon but never actually dip down below. It happens due to the positioning of the Sun and the Earth’s pole.

The phenomenon is not elusive to only the North pole as it also occurs on the other side of the planet, the south pole. The beautiful spectacle can be witnessed throughout the area north of the Arctic circle in summers, and you can enjoy 24 hours of sunlight.

The breathtaking scenery draws tourists from worldwide to experience the amazing visuals created by the not setting Sun. Hence the reason the Arctic is sometimes referred to as the land of the midnight sun.

Why Is the Arctic Ocean Unique Among the World’s Oceans?

The Arctic Ocean is unique in any sense. First of all, it’s the smallest and shallowest ocean in the world.

It’s mainly ice-covered and is isolated from the rest of the world’s oceans; however, the ice sheet varies depending upon the weather. The ice cover expands dramatically during winter and shrinks down in summer.

Besides, in the Arctic, the weather conditions are extreme, like extreme cold, extreme winds, and extreme seasonal changes, conditions not found anywhere on the planet.

Also, the Arctic serves as a popular tourist destination. The breathtaking visuals of Arctic summers are incomparable to anywhere else. Its complex and varied wildlife also makes it a very popular destination for wildlife lovers.

Despite the most inhospitable conditions, the Arctic is home to many amazing terrestrial and underwater species. Its vast stretch of the ocean provides unspoiled habitat for millions of migratory birds and a multitude of marine mammals, including polar bears, the Greenland whale, Arctic seals and the Pacific walrus.

Although these remote waters have not yet revealed all of their mysteries, years of research have given us ample knowledge about the biodiversity of the Arctic circle.

The Marine Ecosystem of Arctic

As stated earlier, the Arctic Ocean is the shallowest compared to the other five oceans on our planet. Also, due to its extreme location, and low temperature, which results in low evaporation, the Arctic is one of the least salty ones.

Besides, the Arctic receives massive amounts of fresh water from rivers and glaciers, further lowering its salinity. The low salinity and cold water enriched with nutrients allow life to thrive here, particularly phytoplankton and algae.

Phytoplankton forms the base of the Arctic ocean’s food web, and jellies and shrimp are the primary consumers, thus making them a fundamental part of the marine ecosystem.

Then comes the carnivorous animals like toothed whales, orcas, narwhals, pinnipeds such as sea lions, seals, and walruses occupying the top of the food chain and constitute the tertiary consumers of marine ecosystems.

Moreover, some sharks and crabs, marine worms, and algae serve as scavengers and decomposers of this isolated marine ecosystem of the Arctic and keep it clean.

Terrestrial Ecosystems in the Arctic

Like the water, the land around the Arctic circle and the snow cover is home to several species. Lemmings, muskoxen, Caribou form the base of the Terrestrial Ecosystems of the Arctic and constitute as the primary consumer.

Next, on the food web comes Arctic foxes, owls, eagles, and polar bears occupying the top spot of the Terrestrial Ecosystems of the Arctic.

Despite being the harshest place on Earth, the Arctic ecosystem comprises a complex food web composed of organisms adapted to extreme weather conditions.

Interestingly, the Arctic is called one of the most productive ecosystems on our planet mainly because of its extremely diverse and thriving wildlife. It’s home to many species such as Caribou, polar bears, musk oxen, walruses, beluga whales, and bowhead whales.

Similarly, the Arctic hosts an extensive population of migratory birds; they come here each year in summer for breeding. Food Web on The Ice Cover of Arctic

Besides the lands surrounding the Arctic circle, the Arctic Ocean also remains covered in an ice cover. However, this cold barren-looking ice stretch is not devoid of life. On the contrary, it supports a whole chain of the food web.

When summer approaches, the sea ice starts melting. The icy water of the Arctic is exposed to sunlight which facilitates the growth of microscopic algae – a major food source for zooplankton. These zooplankton further act as food for fish, birds, and whales.

Another essential part of the seafood web in the Arctic Ocean is Arctic cod, a small fish that can survive in the water temperature between -2 and 0°C due to antifreeze compounds in blood. Arctic cod constitutes the main source of food for whales, seals, and birds of the Arctic and therefore is a key part of the sea food web.

Animals like polar bears, walrus, and seals thrive over the Arctic ice and around the snow-capped lands surrounding the area. Polar bears are the apex predator here and comprise the top of the food web. However, they only hunt in the spring, during the summer, and at the start of the autumn season.

However, the rising temperatures and the shrinking ice cover of the Arctic have put polar bears and other terrestrial species here in danger.

According to the US Geological Survey, if a strict approach isn’t taken, two-thirds of the world’s current polar bear species will be lost.

Similarly, the dry ground in the South Arctic is turning into a marsh due to warmer weather. This directly affects the Caribou, as they take long paths for migration. It poses a threat to indigenous peoples inhabiting the Arctic regions of Greenland, Canada, and Alaska as they are dependent on Caribou for their food.

Moreover, Caribou are dependent on shrubs and lichen for their food, but when there is icy rainfall instead of icy snow, it makes it impossible for Caribou to reach their food. Scarcity of food leads to innumerable deaths of Caribou, disturbing the whole food chain.

Also Read: How is Climate Change affecting the Arctic Ecosystem? In the arctic, at the very first step of food chains are Planktons. Phytoplankton’s – microscopic plants are the primary producers in the arctic as they make their own food.

Just above the phytoplanktons in food chains are tiny crustaceans known as Krill. These shrimp-like creatures are the first-order consumer in the arctic ocean as they feed on phytoplankton.

The top of the arctic food chain is occupied by some voracious predators. These tertiary consumers include leopard seals and orca whales. Leopard seals consume fish. On the other hand, Orca whales are apex predators, hunting down large fishes, sea birds, and in some cases whales of other species.

What Animals Are in The Arctic?

The species living and surviving in these Arctic regions are adapted to extreme weather changes and chilling temperatures.

The hollow hair in polar bears, Arctic foxes, and Caribou traps the air and saves them from these climate changes. Similarly, the black skin of polar bears absorbs the sunlight keeping the body warm.

Furthermore, animals like seals, whales, and walruses have blubber skin (thick layer of fat) that insulate these animals from extreme cold. Some of the fishes have an antifreeze compound within their blood that insulates them from sea ice.

On top of that, most migratory birds use the arctic to build nests and feed and grow their young ones. Thus, we see that even the frigid lands and waters of the Arctic comprise thriving biodiversity.

The Arctic region hosts the harshest climate in our climate. Yet the area is teeming with diverse life forms. Organisms here have adapted to the frigid conditions. Here is the list of animals commonly found in the Arctic ecosystem;

Arctic Hares are the species of hares found in the Arctic region. Their thick spur coat, coupled with survival habits adapted to this region help them survive in the extremely cold climate. 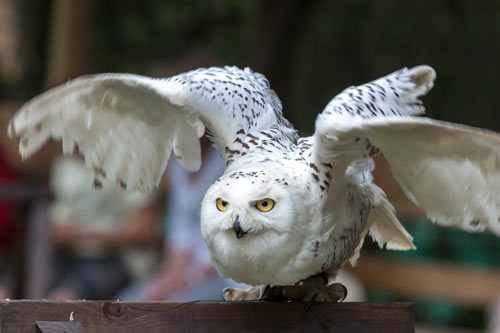 Snowy owls are also found commonly in the arctic region. Their keen eyesight paired with extraordinary hearing capability help them survive in the polar region. 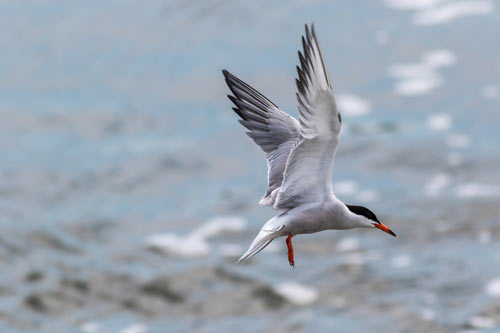 Arctic Tern is a migratory bird and holds the record of covering the longest distance for migration. It travels a total of around 70,000km to 90,000km beginning at the Arctic and ending at the other end of the planet that is the Antarctic. 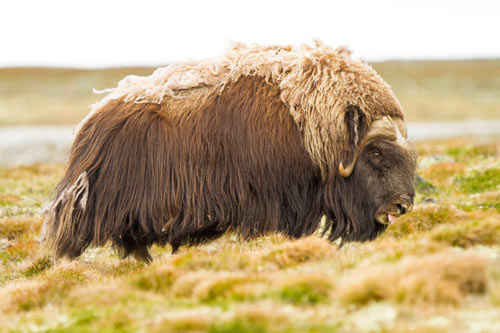 Musk Ox are large land animals that live in the cold arctic region. Their long hairs and short undercoat defend them from cold wind and harsh climate. They have a massive body weighing around 370 kg and strong hooves.

It’s a humongous organism reaching a length of 20 meters. Greenland whale is perfectly adapted to the arctic environment with a huge head that it uses to break through the thick ice to breathe. Beluga belongs to one of the smallest whale species found on our planet. They live in the Arctic and subarctic oceans. The bright white color and a round head are their prominent features. Beluga whales are social animals and usually move in groups. 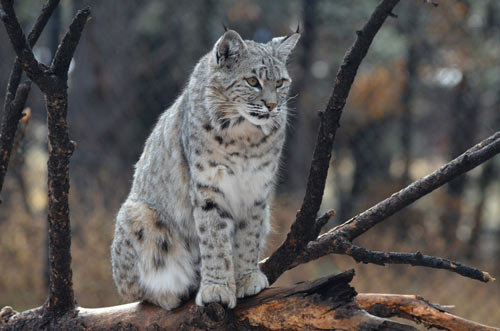 A member of the feline family (generally referred to as cats) Canadian lynx lives in the arctic region. Their long legs and massive body is adapted to easily move over the snow-covered landmass. Their fur color changes according to the season. In winter it’s glossy white, while in summer the furs turn brown. 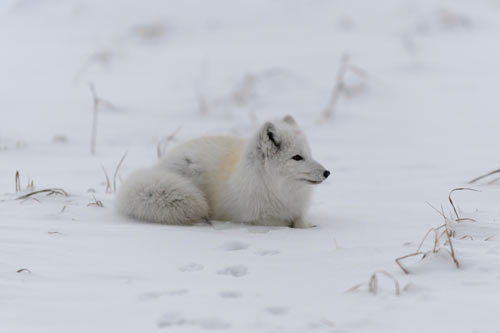 Arctic foxes are one of the most deadly predators found in the Arctic region. They can survive even the most extreme weather in the area. Thick fur, short muzzle, and small ears allow the arctic fox to withstand temperatures reaching -70 °C.

Walruses are long-fanged animals that live within the frigid Arctic Circle. They live in a group and spend most of their time in huge blocks of ice. Their fangs and their bulky body are their main features. Moreover, their fangs could be 1m long which they use to break the ice, fight, or move on ice.

Polar bears or white bears are the most powerful terrestrial predator in the arctic region. Their bulky body covered with thick white furs gives them protection from extreme cold. Moreover, their strong legs allow them to swim in arctic water and their fur-covered paws enable them to easily move the ice-covered surface.

The Arctic region seems to be a cold barren landscape covered with thick ice that spans millions of kilometers. However, even in these extreme condition’s life thrives. The Arctic region is teeming with varied lifeforms. From the icy cold depth of the arctic ocean to the snow-covered high ground, the arctic is full of diverse ecosystems comprising varied wildlife and marine animals.

Top Recycling Activities For Kids - For Home and School