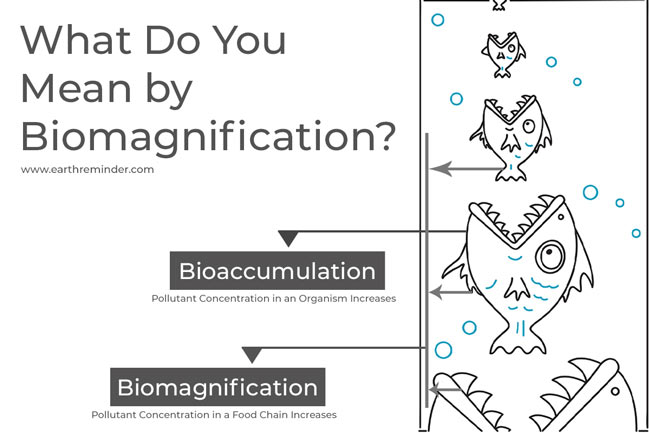 What Do You Mean by Biomagnification?

When non-degradable substances increase in the ecosystem, they increase the rising concentration of toxic substances among the organisms present in the food chain and food web. The poisonous level gradually increased with the increase of the tropical levels of the food chain.

According to bioaccumulation’s affinity, the lower trophic level of the organism is much more or less toxic than the organism presents in the high trophic level. This is increased gradually among the base to top predators via the food chain.

Ecotoxic substances are some chemicals that have more abundant properties than other compounds. Hence, the consistent application of these can increase the level of thermodynamics disturbance in the environment. Therefore, bioaccumulation, hyperaccumulation, bioconcentration, bio-dilution in the environment occurs.  Some of the toxic exhaust substances are human-made, called persistent organic pollutants or pops, agents of biomagnification.

Pops are lipophilic and non-degradable as organisms do not have specific detoxification and excretion mechanisms for them. Some of the examples of them are DDT (dichloro diphenyl trichloroethane), DDD (Dichloro diphenyl dichloroethane), lead, PCBs (polychlorinated biphenyls), toxaphene, monomethyl mercury, hexachlorobenzene (HCB), dieldrin, mercury, etc., which are now a topic of concern.

Why Does Bioaccumulation Take Place?

It is the result of gathering due to the ecotoxic substance in lower to higher trophic level organisms.

Bioconcentration is the increase of concentration of toxic substances within the body, which occurs when the uptake of water is higher than the excretion.

When a predator consumes much prey, which previously eats the lipophilic substances, it happens. Those substances cannot be diluted, which is a reason for transferring the toxic substances in the food chain when a Predator is eaten as prey by a large Predator.

On the other hand, it creates its toxic food web as they lack toxic degrading enzymes. Therefore, we can say bioconcentration and bioaccumulation as the primary causes of biomagnification.

For example- when mercury is used in the industries and discharged as waste into the sea, it chemically forms methyl mercury, which is insoluble in water but soluble in organic solvents. When phytoplankton takes it as nutrients to perform photosynthesis, it mixes with other elements within their body. Then other zooplanktons take phytoplankton as their food, and methyl mercury, within their body, exhibits more toxic properties. In that way, the proliferation of poisonous materials increases with the rise of trophic levels.

The rising rate of environmental degradation is mostly by doing urbanization or industrialization. It might be a reason for losing the ecosystem and habitats for many organisms and also a reason for the deposit of many waste and toxic products into the environment; this causes many problems for both living and non-living things of nature. The primary reasons for biomagnification are:

Industrial waste products are discharged into the environment, and they are mixed with the water. The waste contains much more toxic substances like lead, mercury, etc. Accidentally, leaks also occur in the industry and the chemicals combined with the typical natural assets.

Sometimes the excess number of micro-nutrients, which are necessary for plants and animals, also biomagnified themselves. The oil spill is also a significant reason for biomagnification.

For example– the Oil spill in New Zealand on October 11, 2011, from the container ship Rena into the sea due to which a large amount of aquatic and terrestrial organisms was dead.

We use many pesticides, insecticides, herbicides in the agricultural field for better crop production, and they cause profound harm to the ecosystem.

The chemicals used in the agricultural field biomagnified themselves when mixed with the water bodies like lakes, ponds, streams, oceans, etc. through the flood or storm.

Such insecticides are DDT, dieldrin, PCB, and dioxin having low solubility in water. For instance, we can see the DDT contents (used as mosquito repellent) in lake Kariba and Zimbabwe.

Many industrialized countries banned it since the early 1970s. But still, numerous tropical countries are using DDT for agriculture purposes and to control insect vectors of human diseases. Therefore, agricultural wastes are one of the significant causes of biomagnification.

Industries process the manure and biosolids. These contain chemicals like PAHs (polycyclic aromatic hydrocarbons) and PCBs with high sediment rates.

For regulatory purposes, we can use organic carbon fractions as a measure of the absorption capacity. The majority of PAHs sediments are associated with a coal-derived particle, and PCBs and PAH have a strong binding ability.

For example– In the hunter point of San Francisco, the soil debris contains a high amount of PCB and PAH. These affect not only marine organisms but also affects the groundwater system.

Plastic pollution is also the leading cause of biomagnification. Illegal dumping of plastic and other non-degradable elements into the aquatic land or its coastal area causes severe damage to the ecosystem and food web.

Plastic is a product of Polyethylene and contains many harmful components or chemicals which can biomagnify themselves easily.

The desire to get more fuel and metal causes a severe problem to the environment. With the extraction of petroleum, coal, CNG, LPG, and other minerals, some undesirable metals and gases also come out, causing biomagnification.

For example– Selenium is a hyperaccumulation substance causing a reaction called ‘blind staggers.’ In North America, the Selenium accumulated in the genus Astragalus, 25 species are dying due to Selenium and cause significant harm to marine animals.

Water Pollution and Overutilization of Water

Moreover, with the excess amount of nutrients such as nitrate and phosphorus, the body promotes the overgrowth of algae and microbes. This abundance blocks the sunlight from penetrating and reaching the deeper layer of water.

Phytoplankton release toxins in water and gradually cause the deficiency of oxygen in the water. The increased rate of non-degradable toxic pollutants results in the process of biomagnification.

Fish mortuary and deterioration of the water quality is the consequence of this.

Organic compounds are ubiquitous contaminants in the environment, and their high biological activity affects the aquatic ecosystem. It is used as the anti-falling paints in shipbuilding and has an elevated sedimentation rate.

There are lots of harmful impacts of biomagnification, from which some significant effects are:

The foremost harmful effect of biomagnification includes the elimination of sea creatures. Biomagnification drives all the marine as well as terrestrial animals to a death hole. However, aquatic creatures of the oceans are the most prominent victims.

The non-biodegradable substances like Selenium, mercury, PCBs, DDT, and lots more are the reasons for losing biodiversity undersea.

Further, it has a major effect on the reproduction and development of marine creatures by destroying their reproductive organs and breaking their eggs.

For example– The most affected predator of biomagnification is orca, found in the Arctic Ocean. The high level of PCBs within the bubbler of Arctic orca, making them the most toxic animals in the Arctic. Scientists have found that mother orca will transfer the toxins to their child through milk, which has very high-fat contents. 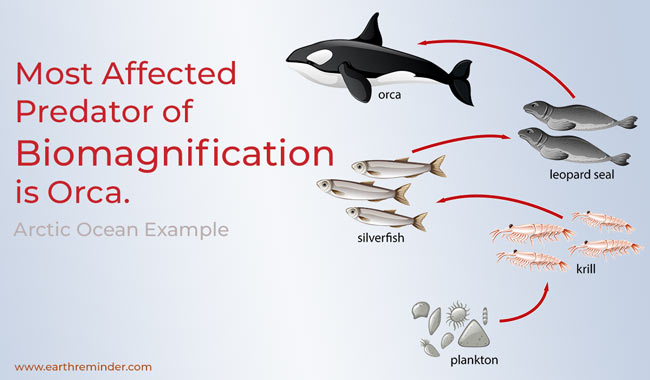 Now seeing the effect of chemicals on the most diverse system of environment, the US government banned DDT production in 1972.

Humans are omnivorous animals of the ecosystem and thus present at the high trophic level on the food chain. Therefore, by taking all kinds of foods along with their toxic storage substances in the body, humans become the target of several deadly diseases, including skin disease, heart disease, lung disease, and even gradual lipid deposition can cause liver fatigue, jaundice and ultimately liver cancer.

An uptake of polluted and toxic foods can drive the world to a pandemic situation. The most common example of biomagnification is the ongoing COVID-19 situation. Various examinations in different research centres confirm that COVID-19 is a result of environmental degradation.

Disruption of The Food Chain

Food chain disruption is one of the major effects of biomagnification as it has a high impact on our ecosystem. As the toxicity increases with the increase of trophic levels, it also causes some organisms death.

As we know, if certain species are removed from the food chain, the entire system will collapse.

Though the production of some chemicals is banned during the 1970s and 1980s, they can still be found in the oceans as well as the tissues of marine animals due to their ability to persist in the environment for a more extended period.

To build a healthy, interactive, and enriched earth, we first need to develop a clean, pollution-less, and thermodynamically stable environment. To create such a situation, we should take some measurable actions.

According to an ecologist Henry David Thoreau, “Every creature is better alive than dead, men and moose and pine trees, and he who understands it aright will rather preserve its life than destroy it.” Therefore, protecting the future environment has the sole motto to provide a sustainable environment. Unless we firmly believe that there is no ‘option B’ for our earth.

We discussed all possible information on biomagnification; if you have any queries, let us know in the comment box.

How to Reduce Air Pollution Essay

Describe the Composition of the Earth's Atmosphere?