Chipko movement came into existence in 1973 to protect trees from cutting down. It was a non-violent movement initiated by the women in Uttar Pradesh’s Chamoli district (now is a part of Uttarakhand, India) for the conservation of forests to maintain ecological balance in the environment. After some time, the movement spilled onto the other Northern states of India. What is the Chipko Movement?

The movement was named as “Chipko” that came from the word “embrace” because the villagers (especially women) hugged the trees and encircle them to protect from cutting. The movement also stands for an Eco-feminist movement because women only created the nucleus of this movement. The power of protest through non-violent worked as a powerful agent for the conservation of the forest land.

The slogan of the chipko movement was “ecology is a permanent economy,” as coined by Sunderlal Bahuguna. He said to embrace the trees and save them from being felled down because they are the property of our hills. Save them from being looted.

One of the main objectives of the movement was to protect trees and forest area because it was the primary source of livelihood for the tribal people of this region. They were highly dependent on the forest resources for their survival.

Along with this, the chipko movement played an essential role in conserving the environment to maintain proper ecological balance in the region. It was one of the most significant movements of India against deforestation to preserve ecology.

The original chipko movement is linked with Rajasthan. In the 18th Century, the Jodhpur’s king had ordered to cut trees to build a beautiful palace. The Andolan started in Khejarli village of Rajasthan, where 363 people sacrificed their lives to protect khejri trees.

This was the first time when a huge number of people led by ‘Amrita Devi’ from the ‘Bishnoi’ community resisted cutting of trees by embracing them. After the strong protest of the movement, the king of Jodhpur gave a royal decree preventing cutting of trees in all the Bishnoi villages. 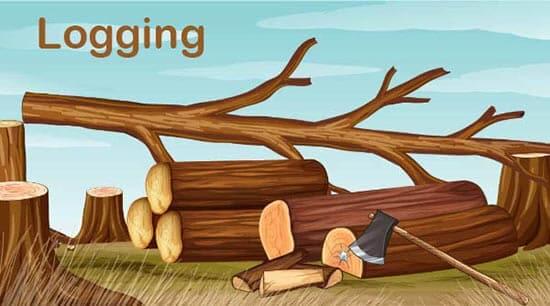 In modern India, the origin of the chipko movement is a village named ‘Mandal’ in Uttarakhand (former part of Uttar Pradesh) in the upper ‘Alaknanda’ valley. However, the Andolan got momentum in the 1970s but evolved as one of the most influential protests of Indian history in the year 1973.

An environmentalist and Gandhian social activist ‘Chandi Prasad Bhatt’ was the founder of modern India’s chipko movement. He was also a founder of a cooperative organization named ‘Dasholi Gram Swarajya Sangh’. In 1964 he used to foster small industries for the rural people using local resources.

In 1970, a tragic monsoon flood occurred due to industrial logging. Almost 200 people were killed in this flood. Then Chandi Prasad Bhatt and his cooperative organization ‘Dasholi Gram Swarajya Sangh’ involved completely in the protest of large-scale industrial logging. As a result, the first chipko protest was initiated in Mandal village in April 1973.

Recommended Read For You: Importance of Environmental Education

Later on, the movement was actually triggered by the government’s decision where a large plot of forest land was allotted to a sports goods manufacturing company. When the appeal of the villagers was denied, then as a reaction of anger, the villagers encircle the trees to prevent them from cutting. Chandi Prasad Bhatt spearheaded this movement and, after several days of protest, the govt. Canceled the company’s logging permit.

After the success story of Mandal village, the workers of Dasholi Gram Swarajya Sangh and Sunderlal Bahuguna (a Gandhian activist) started sharing the movement’s tactics with the local people of other villages throughout this region.

From now, the chipko movement emerged as a women’s movement to fight for forest conservation. ‘Sunedrlal Bahuguna’ also took part in this protest. He fasted for two weeks (inspired by satyagraha movement) to protest against the felling of trees.

Some other participant name associated with the movement includes – Suraksha Devi, Bachni Devi, Virushka Devi, Sudesha Devi, and many more. Later on, the success of the chipko movement inspired other Himalayan states to take the initiative to protect the cutting of trees in their regions.

This movement was started for an ecological purpose to save the trees. These are some of the primary reasons that force the tribal people stood bravely in front of the loggers to protect their forest land.

Chipko movement was basically a forest conservation movement started against unquestionable rights of govt. agencies to order the felling of trees. The word chipko literally means “hugging” the trees to save them from cutting. The local people acts as a protective shield against contractors by hugging the trees.

In the 1970s, an organized protest to stop the destruction of trees spread throughout India quite rapidly from its epicenter Mandal village. It was the courage of local people, especially women who confront the loggers as interpose between them and the trees.

The importance of the chipko movement was to protect forest resources from destruction. Trees are not only used as resources for fuel-wood, timber, food, fodder, etc. but it has much more importance. Trees help to prevent soil erosion, flood, and bring rainfall, etc.

In short, we can say it maintains ecological balance in the environment. So, the people of the hill region of Uttarakhand saved the trees not only for their own benefits but also to help the environment.

Chipko movement is an important environmental initiative took by the villagers of the Uttarakhand Garhwal region. They took the non-violence method to fight against the loggers and contractors. They gained considerable popularity as an Eco-friendly movement for the environment. The movement started in Mandal village paved the way for various such environmental changes in India.