What is the difference between a community and an ecosystem? At their core, it’s what they comprise of, makes all the difference. Community is all about living things. However, an ecosystem is more inclusive and comprises living and non-living things and their interactions. Let’s understand it more. 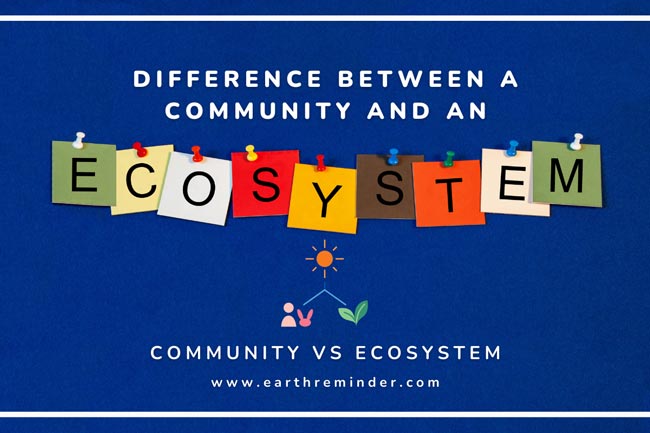 Billions of species evolved independently on each other for survival. They developed characteristics and traits well suited for the local surroundings, forming a chain of giving and taking from the same environment they lived in.

So, in essence, nature is a set of connections between species and their environment which allows them to survive and thrive. But how to study these connections and interactions?

That’s where the need arises to define and differentiate communities and ecosystems. Let’s delve deep!

What is an ecosystem?

The Convention on Biological Diversity, an international treaty adopted at the Earth Summit in Rio de Janeiro in 1992, defines an ecosystem as “a dynamic complex made up of communities of plants, animals and micro-organisms and their non-environment. living (air, Earth, water) which, through their interaction, form a functional ecological unit.”

In simple words, an ecosystem includes all living (biotic) and non-living (abiotic) components of a geographic area.

Within an ecosystem, biotic and abiotic components interact. The interactions happen to maintain the energy flow that occurs at different levels of an ecosystem and is essential for the survival of life.

In the course of energy flow, the first level is occupied by producers or autotrophs. For example, plants use sunlight to produce their own food.

At the next level are consumers, also called heterotrophs. They obtain their food directly or indirectly from producers – for example, animals.

Example of an ecosystem – A forest, desert, a pond, etc., with all of its biotic and abiotic components, form an ecosystem.

What is a community?

Within a community, there are mainly three kinds of interactions. These are mutualism, communalism, and predation.

Example of a community – All the birds, plants, and animals living in a forest forms a community.

The ecosystem includes several communities with all their biotic and abiotic components. However, a community is a set of organisms living in a particular space interacting only with other living organisms.

Difference Between a Community and an Ecosystem

Nature is a delicate balance of all that comprise it. From the tiniest of bacteria to the largest of mammals, each contributes to keeping the cycle of life moving. In this grand scheme, organisms group together and form communities. They interact with what nature has made available for them, such as water, air, sunlight, etc. They make connections with everything around them and make ecosystems. Together these ecosystems act as the fuel for life, giving it the power to thrive, evolve and continue.

In the above article, we have discussed the difference between a community and an ecosystem. If you like it, do share it with your family members and friends.

Is 5G Really 'Bad' For Humans, Animals and the Environment?