Grasslands and savanna – both ecosystems appear to have stark similarities; however, they are not the same. Savannas are also called “tropical grasslands”, and other grasslands are simply “temperate grasslands”. Here we will explore the differences between savanna and grassland in detail. 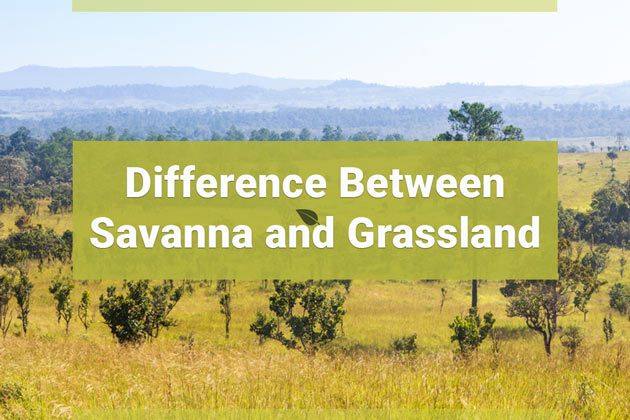 The word ‘grassland’ itself gives away its characteristics. It describes a large landmass dominated by shorter vegetation – mostly grass, hence the name grassland. These landmasses do not receive heavy rainfall to support more extensive vegetation; however, they are not totally dry. They receive just enough rain to support the growth of grass and small shrubs, which prevent these landmasses from becoming a desert.

Savanna is also a type of grassland; however, it’s different from typical grasslands. The land here is covered with grass too; however, you will also find large trees scattered across the land – however, these trees are not close enough to form canopies, like in the forests. Besides, several other differences between savanna and grassland will be highlighted in this post. So, read along!

A savanna (Sabana in Spanish) is a type of grassland. More specifically, the savanna is a collective term for the vegetation zone between the tropical rainforest and the desert. Therefore, ‘savanna’ describes a tropical or subtropical vegetation type.

The alternating humid climate of the tropical areas where the savannas are primarily located is the primary reason for typical savanna vegetation. Savannas are characterized by a strong contrast between rainy and dry seasons. The climate of savanna falls between the arid (dry) trade wind zone and the tropical rainforest climate. Summers are typically warmer, with temperatures around 30 degrees Celsius.

The land is mainly covered with grass. Low precipitation prevents more significant vegetation; however, few scattered trees are common. Moreover, the soil is clay-rich and not particularly fertile.

What is a Grassland?

Grassland or temperate grasslands are huge swaths of land covered in grass but surprisingly no trees. The climate is drier than tropical grasslands or savanna; therefore, large trees don’t grow here.

Grassland experiences two distinct seasons with significant temperature variations. In summers, the temperature could soar above 140 degrees Fahrenheit, while it could plummet below zero in winter.

The soil here is dark brown and very fertile. Plants generally have long roots that reach deep underground and allow the vegetation to survive the hot summer season.

Savannas vs Grassland: What’s The Difference?

Grass, shrubs, and a few trees dominate both savanna and grassland. So, what is the difference between savanna and a grassland? At its most basic, it’s not the grass, but the proportion of trees that differentiates a savanna from a grassland.

Essentially, the savanna is a type of grassland mainly found in tropical regions. Savannas generally receive more rainfall and, therefore, support a few more trees than grasslands – although the tree population is not dense enough to form canopies.

The other type of grassland is generally categorized as temperate grassland. These grasslands experience seasonal changes throughout the year, resulting in hot summers and cold winters. Temperate grasslands receive just enough rainfall to support the growth of grasses, a few herbs, and not much else.

Main Differences Between Savanna and Grassland

Savanna and grasslands are major biomes on our planet and cover an extensive area spanning several continents. While grass is the defining and a common characteristic, both savanna and grassland differ from each other. The former allows the growth of a few trees, while the latter comprises only grass. However, the savanna and grassland provide a home to diverse wildlife and ecosystems that support thousands of species in these primarily dry and warm landmasses.

How Does Deforestation Affect the Oxygen Cycle?