Effects Of Pollution on Human Health Essay has been written keeping in mind the understanding level of children. Every school-going student will be able to learn from this essay. It is written in simple English so anyone will understand it. This essay focuses on core pollution problems that are air, water, and land pollution. The Earth’s population is growing, which leads to the demand for more food, energy, and water. Pollution is also an issue caused by human populations resulting in 54 percent of all deaths occurring because of pollution.

Pollution of the Earth can be called one of the most plaguing problems that we have to face. The problem with pollution is that once it is released into the environment, it is nearly impossible to get rid of. That is why it’s important to prevent pollution before it happens.

Every day, humans release over 40 million tons of waste into our oceans and other bodies of water. This waste comes from many sources such as pesticides, human and animal waste, and trash.

Adverse Effect on Human Lifestyle: The pollution harms the ecosystem and the wildlife that lives around these waters. Even worse, the garbage and harmful chemicals do not easily go away and can influence our health and put us in danger.

Acid rain is a result of air pollution that comes from the burning of fossil fuels, which results in high levels of acidic substances in our atmosphere. The negative effects of air pollution affect not only humans and animals but also the environment and the soil we use to grow our crops.

The percentage of forested areas around the world is declining every year; This also leads to the loss of endangered species, among other things. Humans may be causing global warming by adding too many greenhouse gases into the Earth’s atmosphere. At this rate, our forests will be torn down, biodiversity will be destroyed, and air quality will deteriorate with disastrous results.

Forests cover 31% of the Earth, yet humans continue to destroy forests every day. Acid rain not only causes trees to die but also causes pollution that spreads through the air and affects human health. 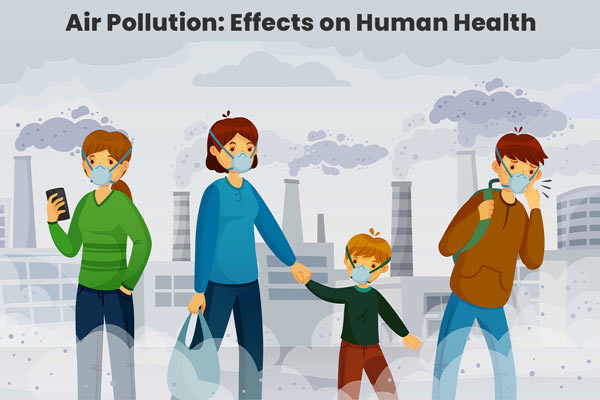 Made up of gases, the air is essential for survival on our planet. It’s the oxygen that keeps us breathing, not to mention that there are unseen gases that affect weather patterns. However, air quality affects everyone regardless of beliefs.

Air pollution may seem like one of those issues that don’t affect you, but it has already killed more than 3 million people each year (Air Pollution Statistics).

Air pollution is killing more people than HIV, malaria, and tuberculosis combined. While most think air pollution is just a big scary word scientists use to play with numbers, for the 3.3 million people who die each year because of air pollution, think about it from that perspective.

It might not seem harmful at first, but it is a significant influence on human health. A study by Harvard University proved that air pollution will have a direct impact on the population of Earth, causing an estimated 6.6 million deaths every year by 2050. The government must impose stricter laws to end this issue once and for all.

There are many side effects of air pollution, like nausea, headaches, and low birth weight. Air pollution has recently been shown to cause lung development problems in children; this can lead to early adulthood lung disease.

But air pollution isn’t just a problem for children. Young adults are also being affected. It is being shown to cause lung damage along with heart disease, strokes, and cancers which will hurt the country’s health.

Air pollution has many different sources like burning fossil fuels, chemical reactions in the atmosphere, dust, transport activities, etc. The effects of air pollutants are directly related to the amount or intensity of exposure. It can increase asthma attacks and other respiratory illnesses.

What is water pollution? It’s when chemical waste is dumped into water bodies. It is harmful to humans and animals that use it for drinking, swimming, or any water-related activity. Water pollution is something we need to stop and take action against right now. The oceans and ponds we pollute will not clean themselves.

Unfortunately, waterborne diseases are a major problem in the developing world. While many of us take access to clean drinking water for granted, a billion people don’t have it, and nearly 1.1 million children will die from a waterborne illness this year.

There are many dangers from water pollution. The most severe is you or a loved one developing a severe stomach ache or an infection. More than 1.4 million people die each year from related diseases alone! This is comparable to a large plane crashing every hour of the day.

The negative effects of land pollution are not just limited to the Earth and animals. Humans can also experience negative consequences that can influence their quality of life and health. Some of the potential consequences include congenital disabilities, the development of asthma, skin diseases, and cancer. People often overlook the impact of human activities on our lands. However, human activities can cause soil pollution. These activities include deforestation, natural disasters like landslides and floods, construction and other developments like urbanization, dumping of garbage, and building of factories.

Recycling is the act of returning materials to manufacture into other goods. Reducing solid waste pollution on land can be achieved by returning reusable materials such as cloth, plastic bags, and glass to reuse in your home rather than disposing of them in landfills. By recycling, you help save natural resources.

There is enough evidence to suggest that pollution, whether it’s industrial or human in origin, is eventually harmful to our environment. The problem eventually harms us too, since we are all linked together.

Pollution shouldn’t be carried from generation to generation. It should stop now, and the only way this will happen is if we work hard as a species to ensure a sustainable future for our planet and species as a whole.

Most of us are either directly or indirectly responsible for causing this problem. We’ve all contributed to it in one way or another, for example, littering, employing machines that are not environment-friendly, using plastic bags, etc. Instead of getting alarmed by this crisis, it is important to take steps in curbing pollution. Yes, everyone must work towards this goal together.

Let us join hands to take various small yet effective measures which will go a long way in making this world a better place to live in.

If you like this essay on the effects of pollution on human health, share it with kids and students and help them achieve good marks in the exam or competitions.