Want to know about the lion, the king of the jungle? Here is an easy-to-read essay on lion in English. This essay is simple in language and easy for students to understand. Kids of classes 1 to 5 will learn how lions spend their day, what they eat, and how they live; This will allow parents and children to increase their knowledge about lions and help them in lion essay writing. 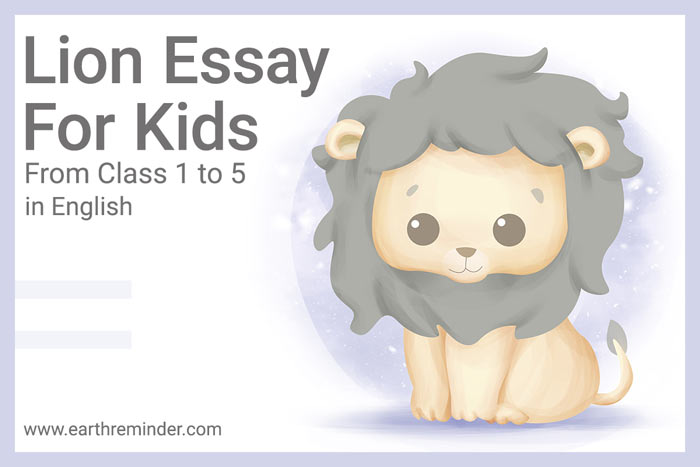 Introduction to the Lion Essay

(Students can also write this introduction on a similar topic – My Favorite Animal Lion Essay.)

A lion is a four-footed wild animal that lives in the jungle. Due to its size and hunting abilities, the lion is referred to as “King of the Jungle.” A lion is a dangerous animal, as it hunts other animals and eats them.

A lion is a carnivorous animal. In other words, it eats animal flesh. Lions run very fast and have strong teeth and sharp nails, which they use for hunting other animals.

Female lion mostly does the hunting while male lion protects the pack. Lions mostly live in the jungle, but you can also find them in a zoo.

Also Read: How Do Lions Adapt to Their Environment?

Body Parts of A Lion

(If students are writing an essay on a similar topic – lion the king essay, the below points will help them to demonstrate powerful lion abilities.) 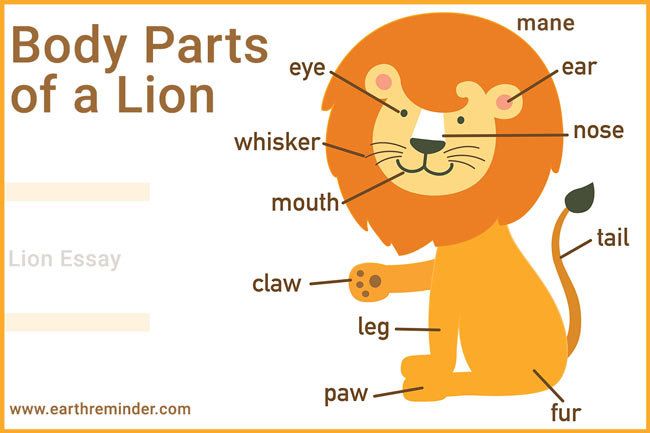 Lion’s neck and head are covered with long, smooth, grey-colored hairs called Maine. These hairs are only present in male lions. Also, mane protects the lion’s face while hunting or fighting.

The hairs on a lion’s body are called fur. They have a double layer of fur on their body. Fur protects a lion from lousy weather in summers and winters.

Lion has a big round face with strong jaws and sharp teeth. Lions have a good sense of smell because of an organ called “Jacobson’s organ” in the inner surface of their mouth.

Family of the Lion Life Span and Behavior of a Lion

A Day in The Life of a Lion

(Students of classes 1 to 5 can write below lines on lions as a whole dedicated topic or simply as a part of essay continuation.) 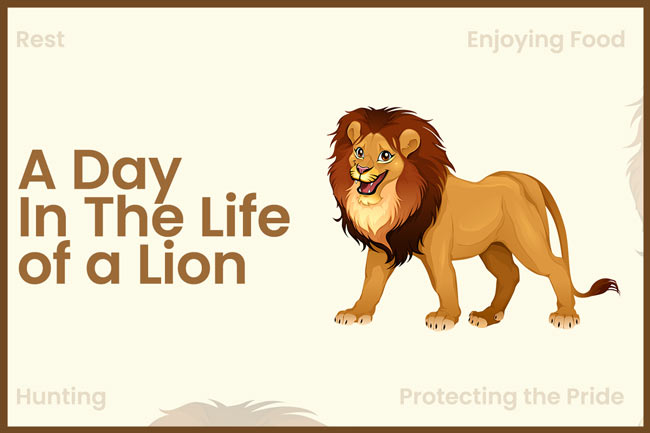 There are many things a lion does in a day. Just like us, lions eat, sleep, rest, run. But they hunt too because they are flesh-eating animals. Here is what a typical day of a lion looks like.

Lions rest half of the day. From the morning till the late afternoon, lions spend their time rolling here and there or just relaxing. Also, late in the afternoon, they will spend playing with other members of their pride. They rub each other, curl their tail, and roar together. Female lions also take care of their cubs when they are not hunting.

When the evening comes, it’s time for finding food. Female lions have the job of hunting animals. A male lion mainly protects its pride and rarely goes hunting. Lions can see in the dark; that is why they hunt at night.

Just like we enjoy tasty food, lions also enjoy eating their food. First, adult lions eat, then cubs get the leftovers of the food. Apart from hunting, lions also steal food from other animals.

Lions are very protective of their pride. Male lions keep watch and protect the pride from other animals. They mark their territory and do not allow any other lion to come into their area.

Risk on Lions from Humans

The lion may be the King of the Jungle, but only very few lions are left today. Hunters kill lions for skin, bones, and furs to make showpiece items and medicines. That’s why their numbers are decreasing. In India, where lions were in large numbers, only 650 are left.

Also Read: What Can We Do to Protect Endangered Animals?

Conclusion and Summary of Lion Essay

Lions are truly amazing animals, and similar to us they have families. They look after their cubs, protect their pride and spend their day hunting for food or dozing around. A strong body, big mouth, sharp teeth, and claws make lions the true king of Jungles. But we have to protect the lions. Their numbers are decreasing, and soon all the lions will be gone. We should stop hunting lions and not cut down the jungle where lions live. If we do not take action, soon the ‘king of Jungle’ will fade from our planet, and the roar of the lion will never be heard again.

If you like this lion essay, share it with your friends and let them also gain some extra marks in the competition and exams.

How Does Deforestation Affect Wildlife?