Pollution Essay For Kids (from class 3 to class 5): 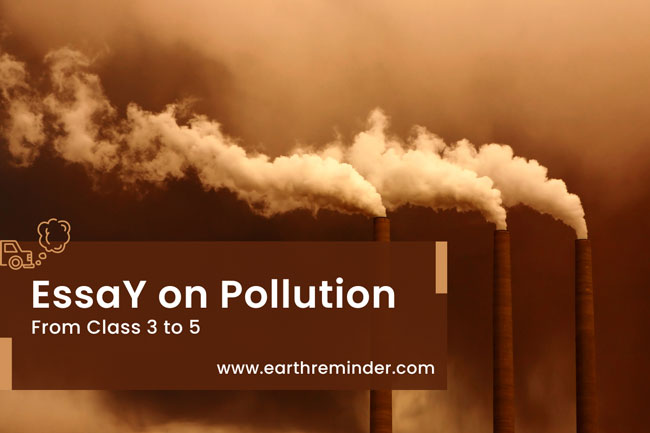 Pollution is nothing but an unconscious effect of human activities as a result of advancement. Kids don’t have worldwide knowledge of pollution. They believe what they see. As pollution has spread its effect all over the environment, there is nothing hidden now.

This article will assist kids from class 3 to class 5 in writing a good-quality essay on pollution. We have used simple languages and attractive words which will help kids to improve their basic ideas. So, let’s begin.

What Do You Mean by Pollution?

When a substance, which is harmful to both environment and human health, is introduced into nature, we call it pollution. That substance causing pollution is called a pollutant.

The effect of pollution depends on the quantity and type of pollutant. Day by day, pollution is getting worse, and people are getting careless.

Many organizations are trying to make people aware and organize different events such as spreading awareness and cleaning plastics from different depositions, and plantations, are organized by people.

But this is not enough to stop the increasing pollution. To reduce the pollution effects, we have to find the root source of pollution along with purifying the existing pollutants.

In this essay, now we will discuss different types of pollution, which will show the understanding of kids on the subject matter.

What comes to our mind when we think about the variety of pollution? Where can the pollution spread?

Well, pollution has spread over all of our basic needs like air, water, and soil. In fact, some kinds of pollution are not even visible like noise pollution.

In this section of the essay, we will explore the various types of pollution along with their causes and effects briefly for kids of class 3 to class 5.

Life is impossible without an atmosphere. Our biotic (Living) components remain healthy when the atmosphere is clean. In today’s world, it has become a challenging task to find fresh air. Specifically, in urban areas, the rate of pollution is more.

Also Read: Air Pollution Essay For Kids from Class 3 to 6.

Urban areas have more industries and vehicles compared to rural areas. Toxic gases like oxides of sulphur and nitrogen are released from different kinds of factories.

The major problem is the particulate matter which is discharged into the air due to the exertion of the unfiltered gases from industries. The rapid increase in vehicles has resulted in an increase in greenhouse gases (carbon dioxide, methane, etc.).

Oxides of sulphur and nitrogen are the leading cause of acid rain and also play a significant role in the formation of smog (Smoke+fog).

Water is a universal solvent. In fact, in all living organisms, water is present in significant percentages.

The human body contains about 70% water in its total composition. There is no scarcity of water on earth, but the usable water percentage is deficient.

About 71% of the earth is covered by water, but 96.5% is only ocean water. This less amount of fresh water is also becoming polluted day by day.

Also Read: Water Pollution Essay for Kids From Class 3 to 6.

Significant causes of the polluted form of water are urbanization and industrialization. Industries discharge their hot and toxic effluents into the water without any pre-treatment.

Due to urbanization, the amount of wastewater or sewage has also increased. In most cities sewage is mixed in the river directly or with very moderate treatment. Thus, most of the water reservoirs are filled with chemicals and wastes. The ocean is also getting deposited with plastics.

Modern agricultural processes are also responsible for water pollution. The use of pesticides and fertilizers leads to polluted water after the irrigated water is mixed with it.

Toxic water discharge results in the extinction of aquatic animals. Aquatic animals can’t tolerate the chemicals and excess heat and are getting killed.

Many people are also not getting clean drinking water. More than 1 billion of the population don’t have clean water, and 2.4 billion people lack adequate sanitation in the world.

Many deadly diseases like typhoid, diarrhoea, and hepatitis spread through water by the consumption of such contaminated water.

Soil is a crucial aspect as it provides land to live on and food to eat. But when the soil gets polluted with a high amount of toxins, it becomes dangerous both for human health and the ecosystem.

There are various causes of soil pollution, but most importantly modern agricultural methods and waste disposal are responsible for this. To increase productivity and feed the large population, we try to cultivate more crops in less time and effort.

So, we use pesticides to kill insects and fertilizers to make the soil more fertilized. But excess use of these chemicals causes soil pollution. Deforestation is also a reason for soil erosion and soil pollution.

Solid wastes are usually dumped in the soil and ignored. Eventually, these wastes degrade in soil and release different types of toxic materials which pollute the soil.

This problem is seen mostly in urban areas. The sounds which are irritating our ears are counted under noise.

Sounds from vehicles and industries or any other types of machinery are the primary source of the noise. WHO has allowed only 50db sound in residential areas but now it has crossed 98db. Loud music, aeroplane sounds, etc. also cause noise pollution.

High-frequency sounds are not healthy for humans and other animals. They cause stress, irritation, and hearing problems, and most importantly, they may lead to cardiovascular diseases.

We all have electronic devices in our houses. But what happens when they get damaged? Either we throw it, or we exchange it with a new one. Have we ever thought, what happens to those electronic waste?

Electronic wastes are dumped in the dump yard. With time many radiations are released from those wastes. Nuclear wastes release a high amount of radiation as compared to electronic wastes.

Due to radiation, every individual gets mutated and can even suffer from cancer.

Can we imagine our life without plastic? When we look around, we will notice that maximum things are made up of plastics. We forgot to choose an alternative for plastic and are continuing to use it in every field.

After use, we dump the plastics. But plastics don’t degrade for hundreds of years. So, they get deposited in the soil and ocean.

This deposition makes both soil and water polluted. Plastics make soil infertile and aquatic animals face many problems due to plastic deposition in the ocean.

Prevention For All Kinds of Pollution

Also Read: How to Save the Earth From Pollution?

To stop pollution, all have to work with responsibilities. Both citizens and the government have to be sincere.

There are many laws to protect the environment, but many of them have been ignored. Day by day ecology is being imbalanced.

If proper steps are not taken, then that day is not far when we will die without clean air and water. At last, we will request everyone to secure this environment as we save our family from danger.

This article is a basic idea about almost all the major pollution that exists in the world. Through this essay, kids in classes 3, 4, and 5 will get awareness about upcoming problems and recent issues regarding pollution. After getting an idea, they can write this in their own wording.