Earth’s atmosphere contains various gases like nitrogen, oxygen, argon, and greenhouse gases. The primary greenhouse gases are carbon dioxide, methane, nitrous oxide, ozone, and water vapor. The account of greenhouse gases is increasing day by day in the atmosphere, which is causing the greenhouse gas effect. Simultaneously, the world temperature is rising at an alarming rate, causing global warming. 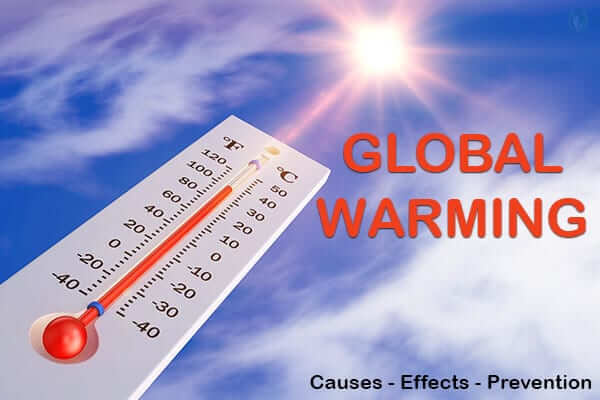 Both land and oceans are heating up. Due to global warming, the atmosphere is getting hotter and hotter, resulting in global climate change.

Climate change is becoming a big hurdle for the survival of biodiversity. Many plant and animal species that are not able to manage the changes in the climatic conditions have extinct, and many more are close to extinction.

Many factors influence greenhouse effects and other pollutants in the atmosphere. These factors are directly or indirectly linked with us. If we take an example of carbon emission, it happens due to various human activities like industrial processes, transportation purposes, farming activities, etc.

This is the high time to think about this environmental issue quite seriously. Here you will get information about the causes, effects, and preventive measures of global warming. This information will help you to enhance your knowledge and also to make a decision on how you can participate in preventing global warming.

When the gases (like carbon dioxide & other greenhouse gases) and other pollutants accumulate in the atmosphere and absorb sunlight and heat radiation, then it causes an increase in the average temperature of the Earth. In simple terms, this increase in temperature is termed as global warming.

There are many reasons which accelerate the emission of these gases in the atmosphere, which are mostly associated with human activities. We need to decide our limits to prevent global warming and its effects.

What Are the Causes of Global Warming?

It won’t be wrong if we say that fossil fuels are the first source of global warming. Fossil fuels like coal, oil, and gas are primary sources to generate electricity and power; however, it releases a tremendous amount of carbon dioxide in the atmosphere.

Plants and trees are the backbones of the environment as they play an essential role in regulating the climate worldwide. They clean the atmosphere by absorbing carbon dioxide from the air and releases oxygen for the organisms to breathe.

We clean acres of forest lands for various purposes like urbanization, industrialization, farming, to get timber, palm oil, etc. The unfortunate fact is that cutting of trees releases back the stored CO2 in the atmosphere causing global warming.

Forest degradation causes up to one-fifth of greenhouse gas effects that end up contributing to global warming.

Livestock like sheep and cattle are also responsible for causing global warming. As they produce methane, a greenhouse gas that contributes a lot to global warming.

Certain fertilizers release nitrous oxide in the atmosphere. Nitrous oxide is also a greenhouse gas that enhances the effects of global warming.

For example – Australian farming are responsible for about 16% of total global greenhouse gas emissions.

Waste management techniques such as landfills and incineration release greenhouse gases like methane and many other harmful gases in the atmosphere. These gases not only cause air pollution but also cause soil and water pollution when disposed to land and waterways. All these lead to global warming.

The mining and metallurgical industry is an integral part of modern life. We are highly dependent on these industries. The metals and minerals we get from mining are the raw material. We use these raw materials for construction work, transportation purposes, manufacturing, etc. Global warming affects the entire environment to higher risk. The overall climate of the Earth has been affected by global warming. These are the major effects of global warming that will help you to understand the seriousness of this environmental issue.

This is the primary effect of global warming. As the name suggests, global warming is directly linked with an increase in the average temperature of the planet. If we look at the reports of NOAA and NASA (National Oceanic and Atmospheric Administration), the average temperature has been increased up to 1.4 degrees Fahrenheit across the globe over the past 100 years.Also, Hottest year was 2016 (1.78 degrees F). If it continues like this, life on the Earth has to struggle very hard to survive.

Oceans absorb about 25% of CO2 produced by human activities every year. When carbon dioxide dissolved with ocean water, it forms carbonic acid. As a result, the ocean becomes acidic that also upset the pH balance and thus affects the lives of millions of ocean creatures.

Melting of ice is majorly affected by global warming. The increasing temperature of the planet is causing ice melt. According to the National Snow & Ice Data Center, now there is 10% less permafrost in Northern Hemisphere than it was in the early 1990s.

Arctic sea ice is also affected by global warming. In 2015 and 2016, it was recorded less sea ice in both the fall & winter of the Arctic region when it was supposed to reach its peak.

Glacier retreat is another example of global warming effects. According to U.S. Geological Survey, now there are only 25 glaciers found in Montana’s Glacier National Park, where once there were about 150 glaciers found in this region.

In general, sea level rises when the ice melts. According to the 2014 report of the World Meteorological Organization, a rise in sea-level has accelerated on an average of up to 0.12 inches every year worldwide. It is a big reason to worry about the future of our planet.

Climate change is the foremost observed effect of global warming. It is affecting every single corner of the Earth, starting from glaciers to sea levels. All this has invited extreme weather events to occur. As a result, some parts of the planet experience sweltering summers, whereas some parts experience freezing winters.

Due to global warming, the chances of extreme weather events like hot waves, droughts, floods, hurricanes, etc. have increased a lot.

In 1996, NOAA established the U.S. CEI (Climate Extremes Index) to track extreme weather events. According to CEI, it was found that the most unusual events in historical records have been increasing over the last four decades.

Flora and fauna of the Earth are also the victims of global warming. Due to global warming, various plant and animal species are moving to higher altitudes towards North (as reported by the National Academy of Sciences).

Warmer temperature will also spread various disease-causing pathogens that will result in the killing of many plant and animal species.

The effects of global warming may lead to the disappearance of about one-half of Earth’s plants and about one-third of animals from the current range by 2080 (as specified in the Journal Nature Climate Change report, 2013).

If we have made changes in the natural cycles of the climate by causing global warming, then we can also find out some solutions to rectify these effects. Here are some ideas that you may follow in controlling global warming-

The world is facing the problem of global warming, and the one who are majorly responsible for this environmental issue are “We! The humans”. However, it is quite tough to stop global warming, but we can still reduce and slow down the issue.

It is humans who have changed the world drastically, and only we can make changes for the betterment of the environment, for the safety of future generations, and for the Mother Earth as a whole.