Grassland ecosystem is characterized by a dry climate that allows very little vegetation mostly dominated by different species of grasses. The grasses reproduce in grasslands through the pollination process or in some cases through producing plants from their roots. Grassland ecosystem is known by different names across the globe. For example – steppes in Europe & Asia, Veldt in South Africa, Pampas in South America, Downs in Australia, etc. The climatic conditions of different grasslands vary to some extent, depending on their locations.

Grassland ecosystem plays an important role in the animal kingdom. Various species of animals starting from herbivores, carnivores, omnivores, insects, etc. live together in grasslands making it a rich ecosystem in terms of the food chain.

In general terms, an ecosystem with huge open lands where the vegetation includes different types of grasses with very few numbers of trees is known as the grassland ecosystem.

The rich nutrient content improves the fertility of the soil that makes the grasslands perfect for farming; This is why more than 50% of temperate prairies grasslands have been used for farming purposes. These farming lands fulfill the world’s demands for food to a large extent.

As the name suggests, flooded grasslands have water throughout the year. That is why here you can find a huge variety of plants that grow in water.

Tundra grasslands are also known as polar grasslands. It is located in higher altitudes to subarctic areas. Tundra grassland ecosystem experience a very short growing season. As far as the vegetation of tundra grasslands is concerned, it consists of huge grass fields and shrubs in between.

In simple terms, montane means higher altitudes. The grassland found on high altitudes above the tree-line is known as the montane grassland ecosystem.

The plants found in montane grasslands are unique in structure with dish-like formation, full of fur and waxy surface area. Northern Andes is an excellent example of a montane grassland ecosystem. 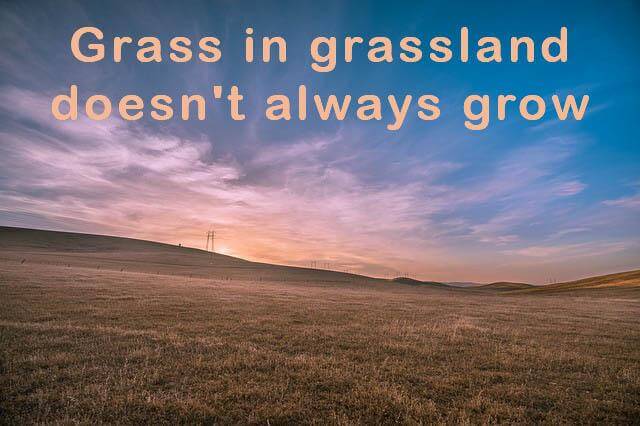 Precipitation (rain) in the grassland ecosystem

Grasslands ecosystem receives quite limited rainfall annually, and it covers almost 25% of the total land surface of the Earth. Limited rain causes no forest growth in this region.

Grassland ecosystem is also prone to drought and uncertain precipitation. Different grasslands have a different measurement of annual precipitation. For example – Savanna grassland experiences yearly rainfall up to 30-40 inches, whereas steppes in South-Eastern Europe or Siberia the annual rainfall ranges between 10-20 inches.


The temperature in the grassland ecosystem

On the other hand, the temperature of the savanna grasslands does not vary a lot. It ranges between 21-26 degrees Celsius. The climate of Savanna grassland is warm throughout the year.

Regular fire in the grassland ecosystem

Fires in grasslands are one of the important characteristics. Due to dry climate and flash lighting, the dry grass catches fire quite easily. Regular fire in grasslands increases the growth of grasses in fields, but it restricted the growth of trees, unfortunately; This is the reason; grassland ecosystem is lacking behind in terms of trees growth.

Poor vegetation in the grassland ecosystem

Poor vegetation is also a vital characteristic of the grassland ecosystem. This ecosystem is named grassland because of its huge area covered with grass fields. You will find very few numbers of trees in acres of grassland areas.

The common species of grasses include purple needlegrass, foxtail, buffalo grass, wild oats, ryegrass, etc. These grasses have strong underground stems and roots that protect them from fires. It is excellent for grazing animals.

key characteristics of the grassland ecosystem:


Grassland ecosystem is an open area covered by grasses all over that provide habitat to various plant and animal species. All these species play a vital role in the food chain of the grassland ecosystem.

Producers build the base of the food chain of an ecosystem and so happens in the grassland ecosystem. The producers are known as the primary source of energy for all the organisms of grasslands directly or indirectly.

Plants come under the category of producers. They produce food, i.e. energy through photosynthesis process for themselves and for the other species that depend on it for food requirements.

The primary consumers are those species that consume producers to fulfill their need for food and energy. Animals like antelopes, gnus, giraffes, zebras, gazelles, elephants, etc. come under the category of primary consumers.

The primary consumers make the second-tier of the food chain in the grassland Ecosystem.

The flesh-eating animal species (carnivores & omnivores) are known as secondary consumers of the grassland ecosystem. These animals get energy from primary consumers.

The carnivores are the secondary consumers of the grassland ecosystem that mostly include big cats, whereas omnivores include animals like hyenas, wild dogs, snakes, etc.

The animals that consume dead remains of other animals are known as scavengers. For example- hyenas, jackals, vultures, etc. These animals sit one step upper than secondary consumers.

Scavengers play an important role in the environment by minimizing the dead animal waste and recycling the nutrients from dead remains back to the environment.

The fungi, bacteria, termites, etc. come under the category of decomposers that sits on the top in the grassland ecosystem food chain. Decomposers consume matter from dead species of flora & fauna releasing the inorganic nutrients back to the environment such as carbon dioxide.

Decomposers also help to balance the natural cycles of inorganic matters into the nutrient pool.

Animals in a Grassland Ecosystem

In temperate grasslands, you may find some other species of animals like badgers, swift foxes, coyotes and many species of birds, etc.