Understand Effects and impacts of light pollution on humans and animals:

When we heard the term “Light Pollution” what comes to our mind in the first place is – excessive, annoying glare, and unwanted artificial light which is coming from the surrounding where the most intelligent creature (i.e. human) of the Earth lives. 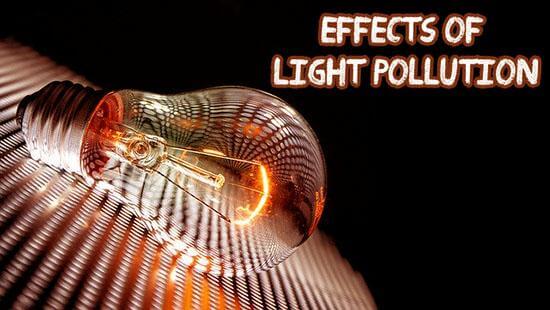 The unfortunate fact related to light pollution is that it is created only by human-made causes. Hence, it is we who are causing light pollution, and as a result, the entire environment has to suffer from the harmful effects of light pollution.

What are the harmful impacts of light pollution?

Light pollution has many serious implications not only on humans but on animals as well. In short, light pollution destroys the entire ecosystem quite severely. The major effects of light pollution in points on the environment are as follows –

Impacts of light pollution on animals

Light pollution is majorly affecting the animals, whether it is a mammal, bird, reptile or insect. Circadian rhythms (i.e. the day & night influence) play an essential role in controlling the characteristic behaviors and physiology of the animals.

The significant events of animal life such as growth, locomotion, development, reproduction, etc. are highly dependent on the proper balance between day & night. All the activities move on smoothly, but when the unwanted artificial light trespass their surroundings, it causes severe alterations in the natural cycles of animals’ activities.

Light pollution may also affect the reproductive system of these insects and animals. Sometimes, light attracts animals and insects into human territories and eventually, their life gets into danger.

Light pollution is also responsible for the changes in the migration pattern of the birds. Light pollution is affecting the mating and prey-roles of the water animals quite badly. For example,- millions of sea turtle lead to innocent death in Florida every year due to light pollution.

The sea turtle generally hatch in darkness and hatchlings use the illumination over the water to get back to the sea. Unfortunately, the hatch-lings move away from water due to excessive light glowing at the sea beaches every time.

Impacts of light pollution on humans

Excess of everything is not good. Excessive light causes light pollution, and the harmful effects of light pollution are affecting the human body in many ways. Light pollution may cause various health issues to our body such as irritation in eyes, redness in eyes and some severe cases permanent darkness in eyes, etc.

Excess light may also cause headaches, fatigue, stress, and anxiety in many people who are quite often exposed to over-illumination. Long-term exposure to light pollution at night may affect the production of melatonin which is the essential requirement for improving our immune system. Light pollution also affects the navigational systems of railways, flights and even sometimes for automobiles as well.

Impacts of light pollution on the Ecosystem of the Earth

The ecosystem of Mother Nature depends on the natural cycle of light. Unfortunately, the artificial lights disrupt the natural flow of the growth and decomposition cycles by affecting the basic need, i.e. food, air, and water supply.

The adverse effects of light pollution have also been observed in the aquatic ecosystem. Light pollution decreases the capacity of the zooplankton to consume algae from the water surface.

This leads to an excessive algal bloom that may reduce the quality of water and also disturbs the life of flora of aquatic ecosystems.

The adverse light pollution effects on the environment also include changes in the physiology of the plants & animals, causing modifications in competitive interactions with each other, problems in the relations of predator-prey, etc.

In simple terms, light pollution interferes with the natural cycles and rhythms of the daily life of the environment. Still, the light pollution unnecessarily disturbs the ecological activities affecting the lives of every plant and animal.

Impacts of light pollution on astronomy

Light pollution is not showing negative implications on humans, animals, plants, and the environment but is also affecting the astronomy adversely. When the light scatters in the sky, it minimizes the contrast in the atmosphere.

In this situation, the astronomers find it quite challenging to view and observe the heavenly bodies of the atmosphere. When the light enters the telescope, it makes the observation very tough due to extreme glare creating disturbances.

Wastage of energy is one of the major impacts of light pollution. It requires a lot of money and energy to supply lighting in public places, houses and for other commercial purposes.

Recommend Read For You: Energy Saving Tips for home and apartments

The general thinking is that people are paying for the amount of light they are consuming, but no one is thinking from a nation’s point of view. A country has to use millions of money to generate electricity along with the uses of non-renewable energy sources and fuels etc.

The use of fuels like coal and oil is affecting the environment simultaneously. In short, over-illumination is just wastage of electricity, money, natural resources, etc. along with polluting our environment.

Looking at the sky at night is one of the adventurous activities that many people love to do, whether you are a kid or an adult. Now, the sad truth is that staring the beauty of the sky at night has become quite tough these days due to the unwanted negative effects of light pollution.

The human-made lighting is creating very annoying artificial light and causing over-brightness of the sky at night.

Over-brightening of the sky is making it very difficult to view the natural beauty of the sky at night. Light pollution is not only a barrier for sky enthusiasts, but it is a big threat for the astronomers as well. Astronomers also are finding it very tough to observe the activities happening in the outer space.