Together with their extensive root systems, trees act as a vast sponge soaking in the excess water. However, when a large number of trees are cut down, the root system is destroyed, and there is nothing to soak in the extra water, which flows freely, flooding the entire area. In simple words, Deforestation leads to decreased water holding capability of soil. This causes excessive water flow into the ground, resulting in floods. 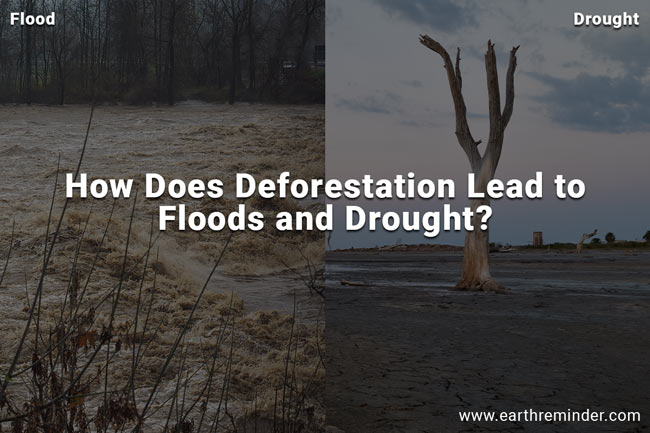 Additionally, Deforestation also leads to droughts in some areas. Deforestation is a leading cause of climate change, resulting in higher temperatures and erratic weather. Trees regulate CO2 in the atmosphere. Also, together with soil, they hold the excess of CO2 within themselves, thus preventing the increased level of carbon dioxide in the environment. However, in the absence of trees, all the extra CO2 is released into the atmosphere, which leads to global warming, and unnatural weather change. Climate change and erratic weather patterns directly lead to lower rainfall and severe drought in some areas.

What Do You Mean by Deforestation?

Excessive cutting of trees from a large area for commercial or agricultural activities is known as Deforestation. Earth has lost about two-thirds of its tree cover, and Deforestation is the primary cause. Several reasons constitute excessive shaving of Earth’s green cover.

Here are some of them;

How Does Deforestation Lead to Floods? 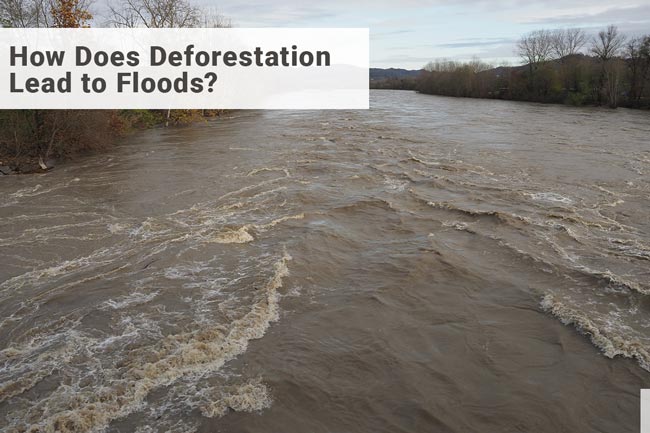 Deforestation leads to continuous floods and dry seasons. When there are trees, the soil has strong water-retention capacity, and it prevents the danger of floods in the heavy rainfall during rainy seasons. However, there is nothing to check the heavy flow of water in the absence of trees, which leads to floods.

Trees firmly hold soil, and their roots act as a water-absorbing system that absorbs excess surface water and funnels it to underground reservoirs. However, when a large number of trees are cut down, the natural blockage that prevents the unchecked flow of water is gone. Moreover, there is nothing to hold the soil in the absence of trees, which flows away in the influence of running water.

Therefore, when there is heavy rainfall, the water doesn’t seep into the ground and isn’t consumed by the trees, leading to flooding.

Also Read: How Does Deforestation Affect the Water Cycle?

Examples of Flooding Caused by Deforestation

In the absence of trees cover, heavy rainfall in the deforested regions can bring severe destruction in the form of floods. There is ample evidence that points to the connection between Deforestation and flooding. Here are some examples that showcase how Deforestation has resulted in flooding in several parts of the world.

How Does Deforestation Lead to Drought? Not only floods, Deforestation, can also lead to severe drought in some places.

Examples Of Drought Caused by Deforestation

There are many examples given below;

In the United States

How To Prevent Deforestation?

Deforestation severely impacts Earth’s ecosystems, causing some areas to submerge in the water while desertifying other regions. Given the concerns that Deforestation brings, there is an immediate need to prevent the cutting of trees.

Here are some steps that can avert Deforestation;

The study results indicate that the future impacts of Deforestation will only worsen with time, leading to more severe floods and droughts.

Hopefully, this article will help readers how pressing the issue of Deforestation is. Incidentally, Deforestation is a disaster for us and the upcoming generation, undermining the environment, reducing water supplies, and causing floods and drought. If we don’t take action now, the Earth will be stripped of its green cover, posing a danger to human existence. So let’s come and unite together to prevent it.

Aims and Objectives of Environmental Education

Why Are Birds Important to the Environment?