Effects of Global Warming on Seals: 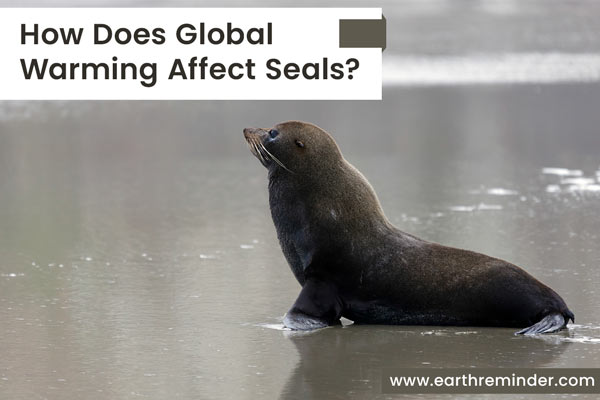 According to a study by NOAA fisheries, global warming affects harbour, ribbon, and spotted seals majorly. Their population is most affected in the Bering Sea and the Aleutian Islands.

The increased temperature is melting the ice in the Polar Regions. The white ice reflects the sunlight and keeps the polar atmosphere cooler.

On the other hand, when the sunlight penetrates through the melted ice, it strikes the bare rocks and earth, which absorb the sunlight causing the temperature to rise further.

As a result of global warming, seal populations decrease rapidly and affect their reproduction, mortality, and body conditions.

Besides harbour, ribbon, and spotted seals, various studies show how global warming affects harp and ring seals. Thus, here we will elaborate on the impacts of global warming on seals. Without further ado, let’s dive right in.

Seals are marine mammals that strongly impact the food web as predators to many aquatic organisms. The majority of seals are dependent on ice for their physiology or primary life events. And that’s a matter of concern for us.

On the shore of Prince Edward Island, the warmer winter climate caused a considerable amount of ice cover to lose, which along with storms, resulted in the hundreds of seal pups separating from their mothers prematurely in 2011.

Further, as per estimation by NASA, glaciers are melting at a rapid rate, and the current event of warm air and water might melt 20% of the ice in the next four decades. In other words, we will lose the vast majority of our ice-dependent animals if we can’t take any preventive measures now.

One such animal is the seal. Not all species of seals depend on ice for their life events, but a few species like the harp, ring, hooded, spotted, bearded, and ribbon seals have significant impacts on climate change.

Global warming primarily affects seals because they depend on ice and snow for breeding. And certain climate conditions due to warmer weather and storms cause the prey to losing. As food scarcity happens, reduced habitat population, habitat fragmentation, and habitat deterioration increase. Now let’s understand the effects of global warming on different types of seals.

Ringed seals – the smallest among all – have an enormous effect on ice sheet melting. That is because they live in the Arctic Ocean and rely on snow dens and sea ice for their living. Life events such as breeding, moulting, resting and protecting their pups happen within the snow dens and ice sheets. Further, ringed seals create breathing holes in deep ice to spread to an expanded distance.

With a dense amount of ice, they construct lairs – essentially crucial for the survival of pups. Besides the harsh environment, the pups also get protection from the foxes, polar bears, and other predators through these snow caves. Ring seals further prey on small and preferred species.

Some studies suggest that ring seals are least sensitive to climate change due to their flexible food choices. However, they get influenced by the extent of ice because of their dependency on ice for reproduction. To complete a six-week-long lactation period, they require a stable amount of ice and snow. And premature break up due to increased temperature and rain causes the pups to be exposed to predators, increasing the mortality rate.

During the spring season, hooded seals concentrate on breeding in three different locations: the Davis Strait, the east coast of Canada, and the West Ice east of Greenland. These are large, and both breeding and moulting depend on ice thickness.

Therefore, some studies state that Hooded seals are highly sensitive to climate change issues because of their narrow food choices. Other than that, they can still live without the availability of thick ice.

However, some other studies show a significant decrease in the population of hooded seals in the past decades.

Bearded seals are another type of ice-loving seal that have effects of global warming. Bearded seals use a unique vocal display to attract female partners during mating season.

As per a study, the climate-related issues are causing problems for the bearded seals with the potential increased mismatched reports.

A few studies suggest their decreased abundance, while others categorize these into the least sensitive type. This is probably because bearded seals often give birth in coastal areas and are less dependent on thick ice sheets for their breeding and other life activities. And their adaptability shows that they might live in a warmer temperature without much ice cover.

Also Read: How to Prevent Glaciers from Melting?

How Are Harp Seals Affected by Global Warming? 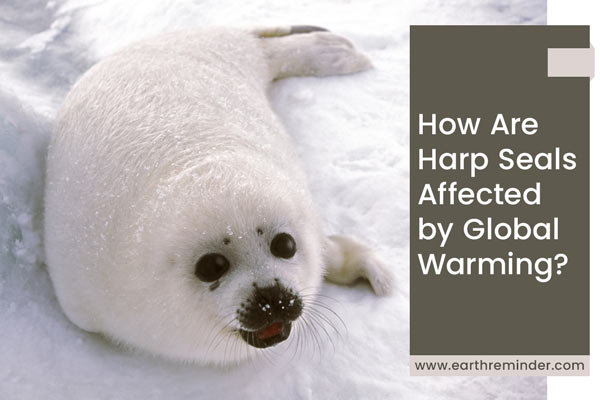 Enough studies are showing the potential risk of habitat loss in the case of Harp seals. Arctic ice floes are where harp seals give birth to pure white pups. These pups use the ice sheets for growing, nursing, and resting during those initial six months before diving into the water.

Ice breaks before the season cause them to separate from their mothers prematurely. In other words, when the ice starts melting due to global warming, these young pups get subjected to water before they are completely ready.

Some of the possible causes of their death include hypothermia, starvation, getting crushed by moving ice, and becoming prey for their predators. Harp seals depend primarily on small fishes and crustaceans, including krill, sand lance, caplins, herring, sculpins, polar cod, and arctic cod.

They hunt for food near the ice edges. As the ice melts, the probability of finding their preferable food decreases.

Further, global warming affects the prey of harp seals. These small fishes and crustacean species live on ice edges to stay protected from predators. And food scarcity due to an increase in temperature leads to increased competition among yearlings (seals of one to two years ago).

Some reports show the stranding of yearlings on US beaches and estimated as more than 3,000 since 1991.

Also Read: How to Save Earth from Global Warming?

A recent study published in Nature explains how global warming affects some predatory organisms like seals. In this paper, the authors have elaborated on the population loss of krill species and the impact on its predators. Antarctic fur seals and Crabeater seals are two significant types of seals affected by this imbalance in the food chain.

There is much evidence that shows red alerts for both the arctic and antarctic populations. And without monitoring the difference coming from global warming, we cannot measure the impact.

Further, awareness among the population is the significant step to help us save these loving marine ice-dependent species in Polar Regions.