Tidal energy is a form of ocean energy that can be our ultimate source of clean, renewable power. It produces from the ocean tides. Tides have mechanical energy. We can capture that sort of power for transferring it into electrical energy, which can be a great sustainable energy source. Ocean tides are the rise and fall of marine water, which happens twice a day. There are lots of complex theories regarding the ocean tides and the formation of energy from them.

This is overwhelming to find complete but straightforward information from vast internet sources. So, this is the motive of our today’s topic, where we will share the complete knowledge of tidal energy.

In this article, we will discuss what tides are, various types of them, the mechanism behind tidal energy, and the advantages and disadvantages. So, let us begin.

Tides are the periodic movement of water, a result of attractive forces between the sun, moon, and earth.

The rise of water is known as high tide, and the fall is known as low tide. Some people always think tides and currents are the same, but you should never be confused.

Tides and currents are similar, but tides are the steep rise and drop of water, while currents are horizontal.

How Do the Tides Form?

The moon’s gravitational pull originates from the tidal system on earth. For understanding the complex scientific concept of the formation of tides, we must go through dynamic theories of the lunar effect.

We know gravity is a force that attracts things towards each other, and it lessens by distance. In that way, the sun and moon are two bodies whose gravitational force is applied on earth. And the sun is about 149,785,000 Km away from earth. So, the sun has half gravitational force on earth as compared to the moon.

And if we take points on earth to measure the moon’s gravitational pull, then the point nearer to the moon has a higher force than the point opposite to it. For that reason, the moon stretches that portion of the earth to form a bulge, and on the ocean surface, high tides are formed.

Simultaneously, the moon’s gravitational pulls act on the earth and move it towards the moon as well; This makes another bulge on the opposite side of the earth. And lastly, the point far away from the moon has the least force and thus pulls less. So, the regions aligned with the moon have two high tides each day, and this stretch of the ocean produces two low tides in the polar region.

But earth and moon both are moving; thus, between two high tides at the same place, there is a 50 minutes duration gap. If you are clear about the concept of tides, let us move forward. 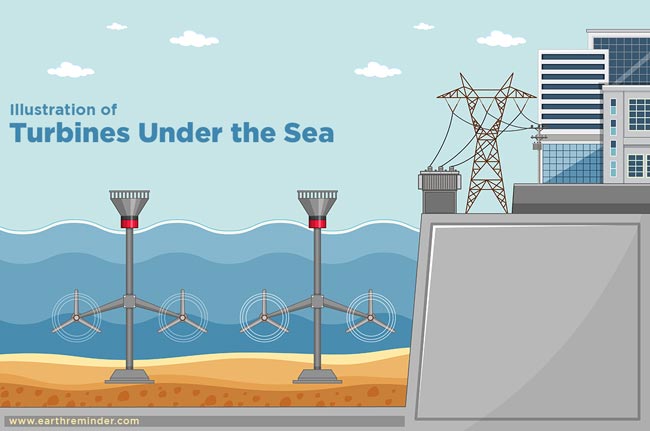 What is Tidal Energy?

Tidal energy is the energy formed by utilizing the high tides and low tides on the ocean resulting from the gravity of the moon and rotation of the earth. If we go to the past, we will understand that tidal mills were built from the 9th century all over Europe.

How Does Tidal Energy Work?

There are lots of technologies developed to produce tidal electricity. From those, three are the most advanced technologies, which are as follows:

The variation in the head between ebb tide and flood tide creates potential energy in tidal range technology.

We can predict the energy production from tidal range technology, and climate change does not affect such power plants.

The sluice gates or valves close when the reservoir is filled at its highest level.

Through a turbine, the water is released at the ebb tide and generates power. In such a way, we can only make power 4 hours per day.

An example of an ebb generation plant is Annapolis, Canada.

Here electricity is generated by the movement of water into the reservoir through the turbines when there are high tides.

The downside of the cycle is the fact that it has less capability and creates less power. It could be ecologically adverse since it stores the water level at a superficial level for quite a while.

Sihwa is an example of a flood generation plant.

Here reversible turbines can generate electricity by incoming and outgoing tides but only for four hours twice each day.

For optimization, we can utilize bulb turbines for water pumping. An example of such a plant is La Rance.

There are various new technologies developed which are performing better than that of tidal barrages.

Tidal reefs, tidal lagoons, and tidal fences differ from tidal barrage in a tiny way but have significant functionality differences.

The first one, i.e., tidal reefs, has a small head difference, exerts low pressure, and has a less environmental impact. Tidal lagoons are situated within the ocean rather than at shore. The third one is Tidal fences; it uses vertical axis turbines connected with fence structure.

By tidal current technology, we can produce usable power from kinetic energy. Such technology uses three different kinds of turbines such as;

The blades of the horizontal axis axial and vertical axis flow turbines are structured parallel or perpendicular to the water flow direction.

These turbines are quite like wind turbines but are smaller in size and slower to control the dense water pressure.

A central rotor shaft connects most of the blades via a gearbox linked with a generator shaft. When the water enters the cylinder, it generates electricity by rotating.

Also, a duct encloses the blades, which helps to increase the power flow by concentrating the ocean current and streamlined.

Hydrofoils are the aeroplane like wings of the turbines in reciprocating devices.

As the tidal streams flow, the hydrofoils move up and down, which gradually rotate to generate power by driving a rotating shaft or connecting a piston to support the hydraulic system.

The blades are not constrained for the dense water level, which is significant merit here. However, various research is going on to advance reciprocating devices.

Only 2% of current projects have reciprocating machines.

Some other developing designs are like rotating screw devices and tidal kites carrying turbines below the wings.

Besides the turbine designs, few other aspects regulate the cost and performance of the tidal current technology. These are such as; support structures, array formation, and electrical connection to shore.

As it sounds, hybrid technology describes the combination of the above two technologies, i.e., tidal range and tidal current technology.

These power plants are newly discovered and under-processed, and suitable for places where we can utilize tidal barrage and tidal current technologies for power production.

How Much Can Tidal Energy Be Generated?

Several reports indicate that the worldwide spots suitable for tidal energy generation can produce about one terawatt (TW).

What Is the Minimum Cost for Producing Tidal Energy?

The largest tidal power plants working are the ‘La Rance’ barrage in France and the ‘Sihwa dam’ in South Korea. At the cost of USD 340 per kilowatt, the tidal plant of La Rance was constructed in 2012, and the cost of establishing the Sihwa dam was around USD 117/kW in 2011.

Further, based on the estimations, the construction cost from Asia to the United Kingdom ranges from USD 150/kW to USD 800/kW, respectively.

Tidal energy has various uses; a few of them we are describing below:

Pros and Cons of Tidal Energy: 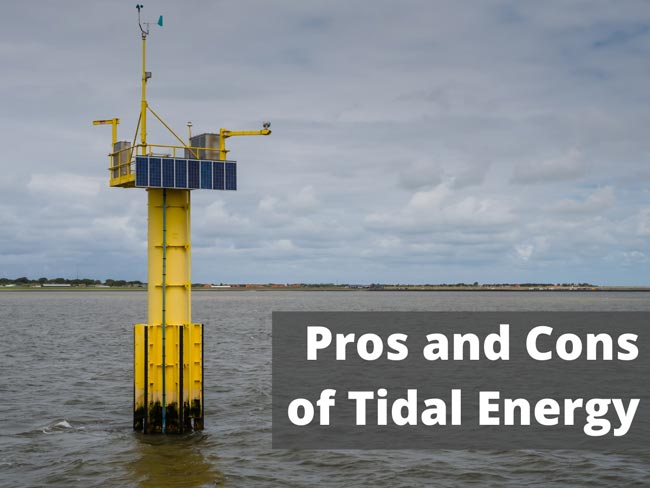 Tidal energy is suitable for the coastal region, and now we can guess why India is so appropriate for generating ocean energy. We have three oceans surrounded from three sides. And thus, tidal power plants will be established in some coastal regions of India.

Coastal regions are appropriate and have excellent potential to generate tidal electricity from turbines. At Bhavnagar, the tidal altitude is as high as 8.5m, and at Gujarat, and it is as small as 0.5m.

The proper place for tidal energy production in India is the Gulf of Kutch and Khambhat in Gujarat and Sundarbans in West Bengal, according to the survey performed by Central Water and Power Commission in 1975.

Moreover, we can generate about 7000MW, 1200MW, and 100MW of tidal energy from the Gulf of Khambhat and Gulf of Kutch, Gujarat, and gigantic delta of Sundarbans West Bengal, respectively.

The government had made several plans for establishing tidal energy plants, but due to the high capital cost, the respective state government cancels the projects. We only can hope that soon this will be possible.

As people become more aware of the health hazards due to harmful emissions from vehicles and other industrial plants, they are looking for alternative electricity generation methods.

However, one way that has been gaining popularity is Tidal Energy. It is one of the ways that ocean energy can provide us with plenty of electricity.

Importance of Environmental Management and Protection