Controlling Environmental Degradation: The environment provides us with basic needs essential for survival. Humans play an integral role in the ecosystem and are guilty of harming the planet. Our activities affect not only the environment but also the organism that exists with us. The sudden increase in temperature and the tragedy of large icebergs melting in Antarctica is proof of a deteriorating environment.

Environmental degradation needs to be considered as a serious issue. The ecological crisis may lead to destruction. The ecosystem needs to be protected before it’s late. There are several consequences of economic degradation. They are as follows:

What Can We Do to Control Environmental Degradation? 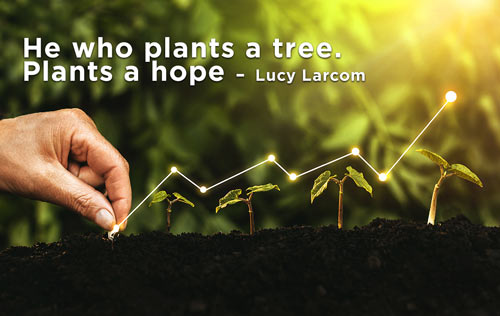 Afforestation or planting of trees can help us control environmental degradation. Plants give us oxygen and take in carbon dioxide, thereby reducing the amount of carbon dioxide in the atmosphere. Forests are home to various indigenous species. Cutting them creates an imbalance in the ecosystem. The roots of the plant hold onto the soil preventing soil erosion. Plants provide us with food and shelter. They also help in controlling the temperature of our planet. They can regulate rainfall. So, let’s plant a tree and contribute to saving our environment.

Rainwater harvesting or collection of rainwater for domestic purposes is a way to prevent wastage of water. The unavailability of drinking water and water pollution makes it hard for people to find healthy drinking water. The water collected by rainwater harvesting can be used for agricultural purposes, domestic works, and cooking. Using this method, we recycle the rainwater for our personal use and thus avoid wastage of water.

The resources are limited and cannot be renewed. Such resources are called non-renewable resources. There is a sudden rise in the human population. So, the resources are being overused. This can lead to exhaustion. So, we need to reduce the use and emission of greenhouse gases. We can reuse the items and recycle them. We can avoid plastic bags and stick to jute bags. The cans can be recycled. We can avoid buying items that are not important.

By reducing the use of chlorofluorocarbons

Chlorofluorocarbons or CFCs such as methane are known as greenhouse gases. They are harmful to the atmosphere and deplete the ozone layer. These gases trap heat in the atmosphere and giving rise to global warming. Depletion in the ozone layer allows ultraviolet rays into the atmosphere. These rays can cause skin diseases in humans, such as skin cancer, eczema, etc. CFCs are extensively used in ACs and refrigerators. So it is necessary to cut down their use. This will reduce the global emission rate and prevent drastic climate change.

The cars release harmful gases like carbon monoxide into the environment. This increases the amount of carbon in the air, causing air pollution. Fuels such as diesel and petrol are limited sources of energy. Excessive use of diesel and petrol will lead to the extinction of resources. Rather, we can travel by bus and other means of public transport or just use the bicycle lying in your house. Also, we can save energy like electricity by switching them off when not in use. We can use renewable energies such as CNG, solar energy, etc. They are found amply in nature and are inexhaustible.

Treating the industrial effluents before dumping them in water bodies

The waste produced by the industries is toxic and causes vigorous damage to the water bodies. The chemicals present in them pollute the water. This leads to the death of many fishes and aquatic organisms.

Water from these lakes or rivers is used for irrigation. The chemicals mix with the soil, and the crops produced are consumed by humans. This causes serious health hazards in man.

Reducing the use of fertilizers

With the rise in population, there is a demand for more food. As a result, the farmers are bound to produce more crop yields to compete in the market every year. This leads to the use of inorganic fertilizers for more yields. Inorganic fertilizers consist of harmful chemicals such as zinc, arsenic, etc., which causes soil pollution. The use of fertilizers has resulted in many health hazards among humans. It also degrades soil quality. We need to stop using inorganic fertilizers. Organic manures can also be used.

The rate of population is increasing at a tremendous rate. Population explosion is a serious issue in developing countries. The mortality rate is decreasing due to developed health care, but the resources remain constant. As a result, competition occurs. A large number of forests are burnt down to provide shelter. Non-renewable resources are overused. As a result, famines and natural calamities occur.

The ecosystem is balanced, and every organism is interrelated to each other. A change or loss of one organism can alter the cycle, causing a discrepancy in the environment.

Due to various environmental changes, many species are getting extinct or are on the verge of extinction. Endangered species, such as the one-horned rhino, needs to be conserved. We need to conserve these endangered species before they get extinct and alter the ecosystem.

Poaching and translocation should be avoided.

The process of conservation of endangered species can be divided into two phases:

Create awareness among people about the issue.

Not many people around us know much about ecosystems and their environment. They have no idea about climate change or global warming. Public consciousness must be made about the necessity of conservation and the harmful effects of environmental degradation. I feel it is our responsibility to make awareness among the people about environmental degradation. Talk about it to people around you and spread the word. Run school campaigns and spread awareness. Abide by the rules of the government and help others implement the laws too.

We have certain responsibilities towards our mother nature. Our environment is deteriorating, and it is of the utmost priority to implement ways to control and prevent environmental degradation. We should give up habits that are harming the environment. Let’s come together and save our ailing planet. CHANGE begins at home. Let’s hope for a better future and standstill.

How Much Water is There on Earth?