How Does Climate Change Affect Glaciers?

Have you ever felt that our climate is changing day by day? Climate is getting hotter with time. This climate change has a terrible impact on our glaciers. 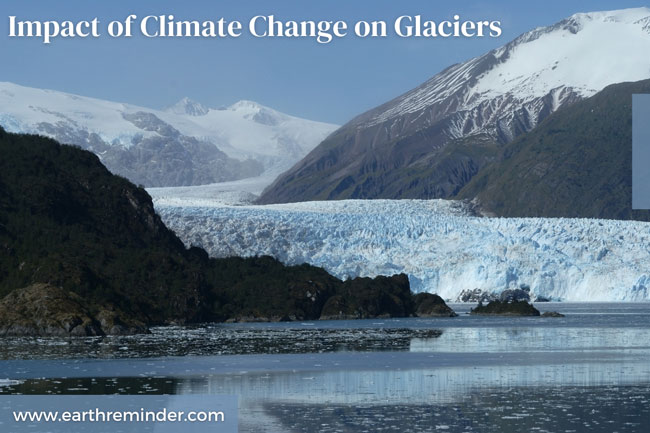 The increase in temperature of the atmosphere is mainly due to human activities. Urbanization and industrialization have led this planet towards destruction.

There are lots of causes behind the increased temperature, like the rise in the concentration of greenhouse gases. Some of these activities include mining, deforestation, environmental contamination, poor waste management, etc.

Before we move directly to the impact of climate change on glaciers, let’s clear our thinking on glaciers and ice sheets. And the first question we have is…

How Did the Glaciers Form?

When a considerable amount of snow piles up at one place and less melting takes place, those piled-up snow compacts to form glaciers.

Further, glaciers are of two types. One is an alpine glacier, and the other one is an ice sheet glacier. Alpine glaciers form near mountainsides and move through valleys.

But ice sheets are not limited to mountainsides. They can spread all over the mountains, valleys, and even planes.

Location Of Glaciers Throughout the World:

Total glaciers present all over the world are about 198,000 to 200,000. We can find glaciers on nearly every continent.

Then why the melting of glaciers occurs, and why should we stop their melting? Why is the impact of climate change on glaciers a matter of concern? And lots of such questions come to our mind after listening to the topic.

Thus, here below, we will explore the significant effects of climate change on our white deposits. Let’s have a closer view.

How Does Climate Change Affect Glaciers?

This unusual temperature rise is mainly due to the long-lived greenhouse gases like carbon dioxide, methane, nitrogen oxides, etc.

Carbon dioxide is the primary greenhouse gas that contributes to about 9-26% of the greenhouse effect. Instead of CO2, Methane, NO2, water vapor, and ozone like greenhouse gases are responsible for 4-9%, 3-6%, 36-70%, and 3-7%, respectively.

However, these greenhouse gas emissions are either natural or anthropogenic. Naturally, the synthesis of such GHGs occurs by the nitrification and denitrification of nitrogen and the decomposition of organic matters.

As we have discussed, this unusual temperature rise is a result of human activities. Burning of biomasses and fossil fuels, logging activities, livestock, and paddy rice farming, also usage of fertilizers and pesticides, are some examples of anthropogenic activities.

Besides these human activities, increased use of cooling systems such as air conditioners and refrigerators are also responsible for climate change.

Yes, those harmful greenhouse gases also include hydrofluorocarbons, perfluorocarbon, and chlorofluorocarbons. And refrigerating systems are the causes of such emission.

Due to the rise in the air temperature, ice shelf collapse has increased in the last few decades. Around 87% of glaciers in the Antarctica peninsula are shrinking.

According to recent research, twelve glaciers around Antarctica showed near frontal surface lowering since the 1960s.

Due to the thinning of glaciers, the acceleration of glaciers has increased. Because thin glaciers float faster, thus we can conclude that rapid warming has resulted in glaciological changes.

According to a report of a study by NASA and the European Space Agency, from 1992 to 2018, about 3.8 trillion tons of ice have melted from the green land’s ice sheets. If this continues, about 3 to 5-inch sea level rise will cause natural disasters like floods till 2100.

How Can We Measure Whether the Glaciers Are Growing or Shrinking?

To check whether a glacier is developing or contracting, Glaciologists check the state and condition of snow and ice at different areas on the glacier towards the summer season.

The researchers check snow level against stakes they have embedded in the glacier, dive snow pits in the surface to inspect the arrangement of seasonal layers and insert long poles into the glaciers to test snow and ice characteristics.

Due to glacial melting, Lake formation has been increased by about 50 percent all over the world in the last 30 years. But there is no global assessment of the increased number of glacial lakes till now.

Glaciers are very helpful to humanity. There are three significant bits of the help of glaciers. Those are providing drinking water, irrigating crops, and glaciers help to generate hydroelectric power.

People living near mountainsides depend on glaciers for their drinking purpose. Glaciers melt and flow through the valley, which is collected by those communities to drink.

Besides this, the demand for glacier water has increased all over the world. Some beverage companies are selling bottled glacial water and glacial ice cubes.

In glaciological areas, the communities melt the glaciers and use that water to irrigate their crops. Traditionally for thousands of years, they are following the same process and earning their livelihood.

Researchers and engineers in Norway, central Europe, Canada, New Zealand, and South America have worked together to collect or gather the glacial resources and benefit from that.

They melt those glaciers and use that melted water to generate electricity, which is called hydroelectric power.

Besides this significant help, glaciers also provide water to the ecosystem as this is the reservoir of water.

Glaciers also provide useful information about the eventual changes in the climate over several decades.

Due to the rapid melting of glaciers, the melted water covers the land portions, and the sea level is rising.

A rise in sea level increases soil erosion in coastal areas. It rises storms and floods as warming air, and sea temperature starts more frequent and exceptional seaside storms like hurricanes and typhoons.

The melting rate is rapid; if this rapid melting rate will continue, then many lands will be covered by water in the future.

If all the ice in Greenland will melt one day, then the ocean level will rise to 20 feet globally. This will disrupt the typical pattern of ocean circulation, and we have to face more numbers of storms.

This will directly affect the aquatic animals, and the businesses related to the sea will face a significant loss. Then the economy is also going to be involved.

Glacier melting has impacted society directly by affecting landscapes. This is a sign to us to improve the climate. But if we will ignore the warning, then we have to face the consequences.

As the temperature is increasing, so, there is no other way to reduce this rapid melting rate. The only way is to control the temperature and take strict actions against this.

In this article, the impacts of environmental changes on glaciers have been broadly discussed. We hope you liked it. If you still have queries, comment down below, and for more such information, follow us!

My Pet Dog Essay for Kids From Classes 3 to 6