Impacts of ocean acidification on marine and human lives

Ocean acidification begins when the amount of carbon dioxide becomes more in ocean water than the normal level. This leads to a lower level of pH of seawater, causing an inappropriate place to live for marine plants and animals.

Decreasing the quality of oceanic water:

The acidification of ocean water leads to the growth of harmful algae. These algae get nutrients in the form of acidity dissolved in seawater, and it prevents sunlight from entering the underwater surface. Sometimes the layer of algae coverage is quite thick that the aquatic plants are not even able to perform the photosynthesis process due to lack of sunlight.

Some of these algae growth is very harmful to marine animals and for humans as well. These algae bloom indirectly cause the detrimental consequences of ocean acidification. Consumption of these algae by fishes and other water animals may cause diarrhea, respiratory issues, irritation, etc.

Also Read: What Are the Causes of Ocean Acidification?

People who plan to swim in the area of these algae blooms may also get various health issues such as skin irritation, eye irritation, asthma, cough, cold, wheezing, etc.

There are various severe adverse effects of ocean acidification on marine life. Shell animals of the ocean have seen the noticeable effects. The acidic nature of the water is affecting the shell of these animals made of calcium carbonate. These animals have to put a lot of effort to repair the damaged shell, which is affecting their growth and reproductive abilities.

“Recommended Read For You: Marine Pollution Causes Effects and Solutions“

The acidity brings down the pH level of the water, which creates difficulties in the formation and maintenance of the coral reef compositions. Ocean acidification affects not only the composition of their structure but also affects their reproductive system. Eventually, Due to increasing acidic nature of ocean water entire marine ecosystem will suffer.

Affecting the vegetation of the marine ecosystem:

Increasing the CO2 level is one of the leading causes of ocean acidification that decreases the pH level of the water. Greenhouse gases effect contaminates the ocean water, due to which the primary producers of the marine ecosystem get exposed to UV radiation. This affects the photosynthesis process of the plankton and other vegetation underwater.

Ocean warming is also responsible for the reduction of oxygen levels dissolved in seawater. All this leads to the harmful effects of ocean acidification.

Some recent studies have shown that ocean acidification is generating some changes in the actual behavior of marine animals. The marine animals start going farther from their healthy habitat due to the increase in the acidity of ocean water. For example – clown-fish.

These fish do not go beyond its habitat, but when the acidity in water increases, it starts crossing its home area. In this way, the risk factors (other predators eating them) for clownfish increases a lot. The lower pH level due to ocean acidification also decreases the sense of smell in fishes that make it tougher to guess the risk coming close to them.

Effects on the shellfish:

We cannot deny the economic and ecological importance of shellfishes. Shellfishes are one of the important creatures of the marine life ecosystem. These animals, such as mussels, oysters, etc. need proper pH balance and carbonate ions to build their outer protective shell.

The acidity of the ocean water is increasing day by day, causing severe damages in the chemistry of the water. Due to which the shellfishes are facing problems in maintaining their existence.

Fish is one of the primary sources of protein for many people around the world. Still, due to ocean acidification, the population of fish and other seafood animals is declining day by day. The seafood sources are decreasing not only for us but for the aquatic animals of the marine ecosystem as well.

Calcium carbonate is an essential compound of marine culture, on which many creatures of the ocean depend, such as planktons, oysters, corals, shellfishes, etc. Due to the harmful consequences of ocean acidification, these animals are not getting proper calcium carbonate for their body maintenance.

Planktons that are the base of the aquatic food chain also rely on calcium carbonate to survive. Plankton is the food source for many marine animals, but these animals have to face the situation of starving due to the decreasing numbers of planktons available in the ocean.

Effects on the fish skeleton:

The oceans are becoming more and more acidic every day due to the increase of carbon dioxide in the atmosphere, which is affecting the marine ecology drastically. Ocean acidification is not only affecting the oceanic invertebrate animals but are also affecting the vertebrate animals. Various changes have been observed in the skeleton of vertebrate animals starting from their movement, behavioral changes to the mineralization of their body parts. These animals are not getting the proper minerals for their growth and survival. 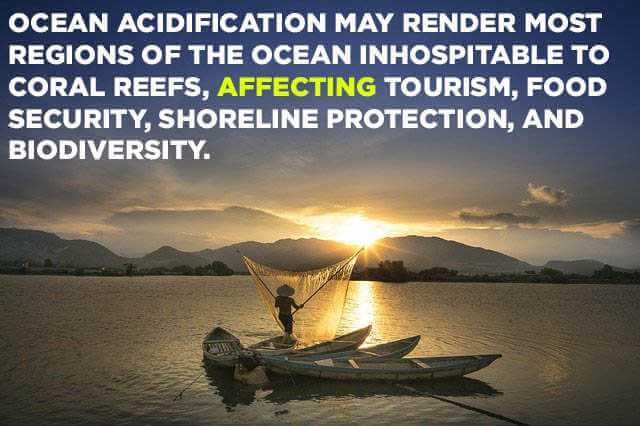 If you love to spend your weekend on your favorite sea beach, then you need to be careful because the harmful effects of ocean acidification may ruin your vacation. Every year many tourists come to these places to enjoy their holidays on breathtaking sea beaches.

Corals are one of the main attractions for the tourists, but their structure formation is getting affected by acidification of oceans. Due to the unavailability of calcium carbonate, corals are not able to form their outer shell, and hence the small animals inside the shell are dying. This is affecting the tourism industry quite severely. Mainly the coastal communities are getting affected because of their source of income loss due to ocean acidification.

The local and state economies are also affecting by the acidification of the ocean. The aquaculture companies involved in the farming of shellfishes such as oyster, abalone, mussels, etc. are facing problems in the growth of these animals, especially the early stage (larval stage) of these animals is very crucial.

At this stage, these animals need the proper amount of dissolved calcium carbonate to build up their protective shells. As the acidification decreases the amount of dissolved calcium carbonate, the larvae of these shellfishes are unable to survive and eventually die. This is affecting the companies associated with the farming of these fishes, and hence the economy is also getting affected.

You can also read water pollution essay for kids covering main points. If you like this article, share it with your family and friends.

What Are the Causes of Ocean Acidification?