The marine ecosystem plays an important role in the protection of the environment. For example – like land plants, the water plants also help in minimizing the carbon level in the atmosphere. Aquatic plants absorb carbon dioxide from the air, and it releases oxygen back in the atmosphere.

The marine ecosystem is a wonderful combination of biotic and abiotic components supporting each other for survival. It is an exciting part of the ecology that will grab your attention once you start knowing it. You can go through this article to get a close-up experience of the marine ecosystem.

Marine means saltwater bodies i.e., oceans and seas of the Earth’s surface. The interaction between the living (plants and animals) and non-living things within the marine culture are commonly known as the marine ecosystem.

The marine ecosystem is one of the largest ecosystem of our planet. In the marine ecosystem, each living organism is dependent on each and creates a beautiful food chain of marine culture. All the biotic and abiotic components play an important role in maintaining proper balance in the ecosystem. 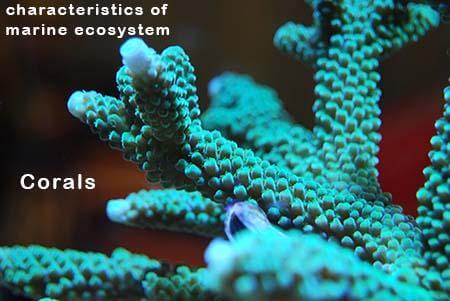 The temperature of the marine ecosystem

Temperature is one of the important characteristics of an ecosystem. The average temperature of oceanic water is 30 degrees Fahrenheit. However, this temperature may vary (maybe colder or warmer) depending on its location on the Earth’s surface.

Water in the marine ecosystem

We call it marine water due to its saline nature i.e., the saltiness of the water. Marine water contains approximately 96.5% pure water, and the rest 3.5% are the dissolved compounds such as chlorine, sodium, magnesium, sulfur, calcium, potassium, etc.

However, the salinity of the marine ecosystem not only depends on these dissolved compounds but on other factors as well, like the latitude, erosion, atmospheric activity, depth, volcanic activity, biological activity, etc.

Sunlight has always been an important factor for an ecosystem. All the living creatures depend on sunlight directly or indirectly to fulfill their need for the food.

More importantly, the availability of sunlight very much depends on the depth of the marine water. There is the aphotic zone (with a water depth up to 100 meters) in the marine ecosystem where sunlight can reach to help the photosynthesis process. On the other hand, the aphotic zone (with a water depth more than 100 meters) where sunlight cannot reach, and thus photosynthesis process gets affected.

Biodiversity in the marine ecosystem

The marine ecosystem supports great biodiversity as compared to other ecosystems of the planet. The species of the marine ecosystem have adapted the aquatic culture for its survival. For example – the fishes have gills that help them to breathe in water.

Many plant and animal species live together in the marine ecosystem. Some of the common aquatic species are- 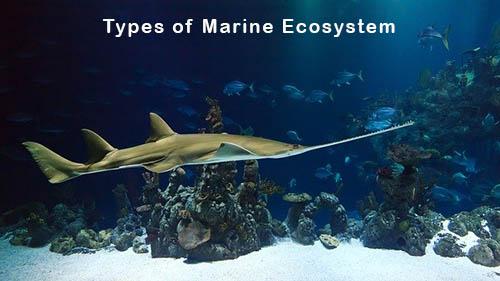 Also Check – How to reduce and prevent ocean acidification?

Sunlight is one of the big challenges to penetrate at the seafloor; however, the species have adapted the marine environment of this region. A huge range of animal species is found in deep-sea marine ecosystems such as squids, fishes, elephant seals, sperm whales, crabs, worms, some sharks, etc.

Also Read about – Importance of coral reefs on our Earth

The area around the river mouth where it merges with marine water is usually termed as an estuary marine ecosystem. The salinity in this ecosystem varies with the tides. The estuary ecosystem does not support a variety of species.

Mostly the species of the neighbouring ecosystem are found in the Estuary marine ecosystem. This ecosystem also plays an essential role in nurseries for various kinds of fishes, shrimps, etc.

In some tropical and sub-tropical coastal regions, a special type of saltwater swamp is found, which is known as mangroves. Mangrove swamps are home for special types of trees that can survive in the saline ecosystem.

These mangroves are characterized by a special kind of roots to absorb oxygen to survive. The roots are extended above the water surface. Mangrove ecosystem provides shelter to various species such as shrimps, jellyfish, birds, sponges, crabs, fish, crocodiles, etc. 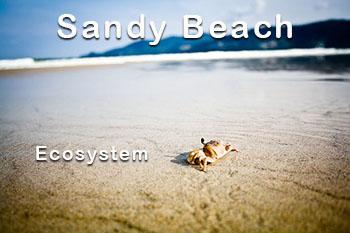 The kelp forest ecosystem is found in comparative cooler water. The average temperature of this ecosystem ranges from 42-72 degrees Fahrenheit with depth up to 60-90 feet.

As the climate of Polar Regions is extremely cold; thus, the temperature of this type of marine ecosystem is also too cold. The species found in the polar marine ecosystem have adapted to the adverse climatic conditions of this region.

The marine ecosystem is a unique ecosystem that supports various plant and animal lives. All these species set an excellent example of a great food chain as compared to other ecosystems.

The sad part is that we are spoiling such an amazing ecosystem by polluting it through disposing of unwanted wastes. We are disposing of our wastes into the oceans and seas that are affecting the marine ecology big time.