Of all the living creatures present on our planet, birds are the most magnificent ones. They are vibrant ones, bustling with melodious music and lively colours. National Bird Day is celebrated because we have used birds for their feathers, as pets, and even as food. 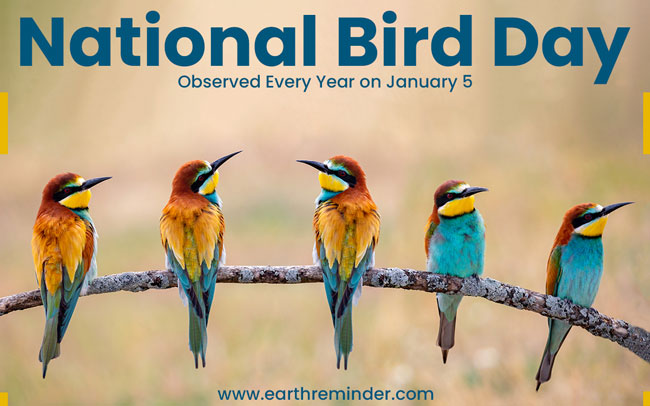 There are several organizations that run campaigns and help in the conservation of our birds. Out of all of them, the Avian Welfare Coalition is the most successful and well-known organization. AWC, along with Born Free USA (a wildlife charity), initiated the campaign known as National Bird Day back in 2002.

Let us find out more about National Bird Day’s history, significance, its celebrations and how to take part in the event.

It is estimated that almost 1200 bird species will be lost forever by extinction by the end of this century. It has become very important that we begin raising awareness about the threats birds face by illegal trading, climate change and diseases.

Birds are illegally traded in the black market, and bidders receive very large amounts of money for selling some of them. Exotic birds such as macaws, eagles, badgers are sold for their colourful feathers, as pets, and even sold as food. This might result in the disappearance of birds altogether. Can you even imagine future generations not being able to see a parrot in real life?

These were the questions that AWC discussed two decades ago in 2002. It was important that immediate action be taken to protect birds, and this idea led to the creation of National Bird Day.

When is National Bird Day celebrated?

With its roots in the USA, National Bird Day has been observed every year on January 5 ever since its first celebration in 2002.

This date was chosen specifically because the annual “Christmas Bird Count” takes place on January 5 too. This annual citizen survey has taken place in the USA for quite a time now. The results provide information about both the numbers and the health of birds across the United States of America.

The Importance of National Bird Day:

Many birds are under threat from climate change, loss of habitat, deforestation and other life devastating factors. On National Bird Day, these everyday evils against birds are spoken about and addressed to the public.

Raising awareness is a major significance of this event, and people throughout the United States take part in it. It signifies a day when birds are to be treated with the utmost respect. This day gives us all an opportunity to educate others about how to protect birds and ways to preserve them.

There are over 9800 species of birds in the world. It is physically impossible for a person to sight every one of them! For example, it is unlikely to spot bald eagles nowadays since they’ve become so vulnerable, and ostriches just don’t belong here. National Bird Day provides everyone who has an interest in birds to catch a glimpse of at least the 850 bird species present in the USA.

How is National Bird Day Celebrated?

There are several ways people celebrate National Bird Day; here are some of the most popular activities:

Read a Book About Birds:

This day is a perfect excuse to try something new or simply brush up your knowledge about birds. It doesn’t matter if it’s a fiction or a non-fiction book; the only requirement is birds! Some good examples of the bird-related book are the “Sibley Guide to Birds” and Noah Stryker’s “The Thing With Feathers.”

Suppose you aren’t interested in reading a book, no problem! There are thousands of documentaries available online about birds. Some of them provide a surprisingly witty and intuitive insight into the lives of birds.

National Bird Day provides people with the perfect opportunity to adopt a new hobby: birdwatching! It was found that a greater number of Americans indulge in birdwatching than watching football or baseball. So, if you want to try something new or need some new company- birdwatching on NBD is a good choice.

Adopt a Bird of Your Own:

Taking care of younger birds, proper cleaning, managing diets, along with entertainment, are some of the aspects of bird owning enthusiasts discuss.

Recommended Read For You: How to Start Pigeon Keeping?

Schools across the US host activities and events for younger kids on National Bird Day. Drawing pictures of birds, doing show-and-tells about their favourite bird are common activities in which the children take part.

This year National Bird Day was celebrated for the first time in the schools of Pennsylvania. Schools gave a holiday to children during which they were supposed to do two tasks.

Observances in Other Nations:

The United States, Canada, along some South American countries observe International Migratory Bird Day. On this day, people raise awareness about the bird populations across the country and help to clean the breeding habitats of these birds.

This program takes place in a wide variety of locations. Zoos, aquariums, and museums are popular sites where International Migratory Bird Day is hosted and celebrated.

Bird Day is a holiday being celebrated in the United Kingdom ever since 1979. Although it was initially named “The Big Garden Birdwatch” by the bird lovers in the UK, the name changed to Bird Day in 2009.

On this day, bird enthusiasts from all over the country flock to gardens and popular birdwatching sites. They spend one hour, as per tradition, trying to catch a glimpse of some of the rare bird species.

Also Check: Why Are Birds Important to The Environment?

How Can You celebrate National Bird Day 2022?

There are several enjoyable ways by which you can participate in National Bird Day, even if you aren’t a US citizen:

But most importantly, try to have fun! Birds are wonderful creatures, and no matter what, they will always make you happy! At the end of the day, you can upload any pictures you’ve taken through the day and post them on social media.

Advantages and Disadvantages of Rainwater Harvesting