What is Smoke Pollution? 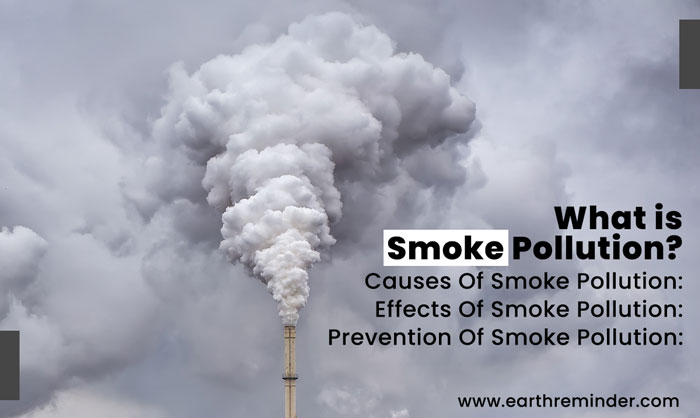 There are various causes why smoke pollution has become a major issue in recent times. The industrial revolution in the past century played a major role in the contribution of humans in polluting the air. Along with that, nature itself contributes to some amount of pollution too.

Extensive Use of Fossil Fuels:

It has often been said that the discovery of fossil fuels was both a boon and a curse for humankind. Their use has helped shape our species into what it is today. Without the industrial revolution, we would have still been living as we did in the 1700s.

But unfortunately, fossil fuels have a vast number of downsides that cannot be possibly neglected. They’re being used at lightning speed every single day, and in the process, they release tons of toxic chemicals into the environment. Automobiles have always run on fossil fuels, be it petroleum, diesel, or liquified coal.

Today, there are over two billion vehicles on the road, and every single day they produce millions of tons of smoke and dangerous particles. Massive amounts of carbon dioxide, sulphur dioxide, and other poisonous gases escape into the air whenever these vehicles run.

Out of all these by-products, particulate matter (PM) is the main culprit in smoke pollution. It consists of a large variety of chemicals. Places like construction sites, fires, or volcanoes sometimes are direct contributors to smoke pollution.

However, most are the result of chemical reactions in the atmosphere due to emissions from vehicles. These particles greatly reduce visibility in areas where coal is the major fossil fuel being used.

During colder months, the intensity of smoke increases so much in China that some cities are forced to shut down roads, schools, and airports. In England, smoke pollution has been persistent ever since the Middle Ages and is the worse in London.

Use of Toxic Chemicals:

Most people are unaware of the dangers of some household products and the harm they cause. Simple things like chemical agents and paint release harmful chemicals into the air. One example is the difficulty in breathing we feel upon entering a freshly painted room. This difficulty arises because the paint has released something called suspended particulate matter (SPM). Unlike particulate matter, SPM differs in the way that it stays in the air afloat for very long durations.

SPM is the cause of a lot of dust in the air. It is also one of the causes of smoke. Today, smoking is a well-known threat to global health. It takes the lives of millions of people each year and ranks number one on deaths that can be prevented. Most people know only about the dangers of smoking to first-hand and second-hand smokers. But people must begin to acknowledge the other harmful ways in which smoking affects human development. Smoking products like cigarettes and waterpipes release a lot of dangerous chemicals into the air.

Although nature is not the main culprit in smoke pollution, it does play a small part in it.

Volcanic eruptions are also one of the causes of smoke pollution. When a volcano of significant size erupts, it releases a tremendous number of toxic gases, chemicals, and other particles into the atmosphere. Volcanic gases that cause a lot of harm are sulphur dioxide, carbon dioxide, and hydrogen fluoride.

Locally, sulphur dioxide gas can lead to acid rain and smoke pollution. Gases like these can be coming from either lava flowing or even a volcano that erupts violently. Ash can travel thousands of miles from a volcano and cause difficulty in seeing, breathing, and general discomfort. These are the typical features of smoke pollution.

One event in history is of importance here: in 536 A.D., the world went dark for 18 months. Europe, the Middle East, and parts of Asia experienced fog for a very long time. It blocked the sun during the day, dropped the global temperature by a lot, and killed a lot of people. It was confirmed much, much later that the cause for this was none other than a massive volcanic eruption in Iceland.

Diseases of the Breathing System:

The effects of smoke pollution are many. Its effects reach millions of people across the world each year in the form of respiratory diseases. In recent years, asthma has begun to become increasingly common.

Adults over the age of forty can barely run a hundred meters without any discomfort. Emphysema and bronchitis have become ordinary and common diseases in major cities like London, Beijing, and Los Angeles.

There was a study on mice that found that exposure to air pollution during pregnancy leads to premature birth and birth defects. There was air containing invisible particles produced by burning fossil fuels in the study, and the mice inhaled this.

The level of pollution in this was similar to what many urban areas have. It was revealed that exposure to smoke-filled air during the initial stage of pregnancy led to premature birth in 88% of the mice.

Approx 41,000 people from Germany, Denmark, and Spain were part of a study that found that smoke pollution increased the risk of high blood pressure. It also rose the chances of getting hypertension among adults.

Nobody in this study had hypertension when the research began. A year later, 45% of the subjects had developed hypertension. 15% were taking medications to lower blood pressure.

In addition to taking a toll on the body, smoke pollution can also cause psychological distress, according to a study published in the November 2017 issue of the journal Health & Place. Air quality data from an air pollution database was used by researchers. Alongside this, survey results from 6,000 participants from across the U.S were also used.

They assessed levels of psychological distress in participants using a scale that evaluated their descriptions of feelings of hopelessness, sadness, nervousness, and other negative emotions. As air quality went down, people started experiencing these symptoms more. Therefore, smoke pollution can also make you feel depressed!

What Are The Threats To Our Natural Resources?

How is Climate Change affecting the Arctic Ecosystem?