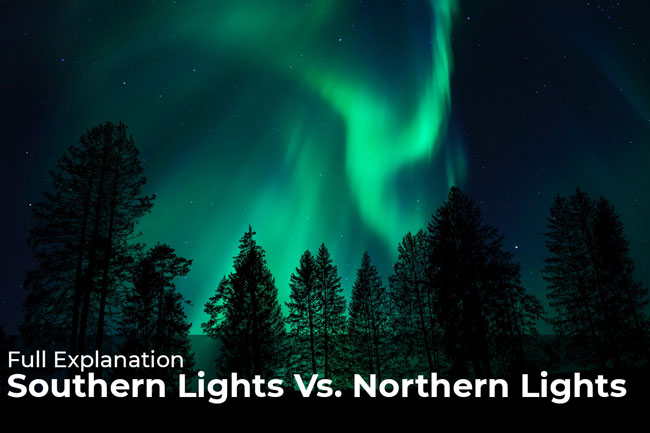 When we start writing a list of wishes or merely creating a bucket list to complete in the future, the first thing comes is tourism. After researching the best destinations in the world, we come to know that there are lots of unique places to visit.

But it’s impossible that you won’t choose the astonishing glimpse of colors on a dark sky. Here comes the curiosity of northern lights vs. southern lights. In a single word, we can call them auroras.

Auroras are natural phenomena that increase the beauty of a night that everyone wants to capture them either on cameras or as experiences.

Ancient mythology describes auroras as the bridge of candles or even the souls of our ancestors. However, this physical phenomenon is a part of on-going space research. Still, the most accurate theory describes its reason for solar storms.

When charged particles from the sun collide with the gaseous molecules of the earth’s atmosphere, auroras form. This is true for both the polar lights. But, have you ever wondered about southern lights vs. northern lights and how these two terms differ from their characteristics?

Well, that is the motivation behind this article. Here we will explore all those facts which make northern lights different from southern lights. So, let’s have a closer view.

What Is the Northern Light?

Northern lights are the specks of lights shown in the dark sky, specifically on the countries or regions near the earth’s north pole. These lights are of beautiful color, and there are lots of places where you can see these lights by yourself.

The scientific name of northern light is aurora borealis. This comes from the name of Roman Goddess Aurora, and Borealis shows the meaning of north wind and coined from a Greek word.

Besides having different places to visualize these lights, still, it’s difficult that you will get a perfect glimpse. Yes, it’s hard to discover or predict whether or not the intensity of light will be more profound.

Different colors are formed due to the interaction of charged particles from solar storms with varying kinds of gases present in the earth’s atmosphere.

The most commonly sighted colors are green and red, resulting from interaction with oxygen at different levels.

However, nitrogen, which is massively present in our atmosphere, is difficult to degrade, and thus, blue, orange, or purple lights are seen rarely.

What Is the Best Time to Visualize the Northern Light?

If you are determined to see these lights as soon as possible, then you should know the perfect time to enjoy them.

These lights are present every time, yet, significantly seen during dark nights and mostly long nights. That’s the reason winters are the best period when you can experience these lights to the fullest.

It is found that the most intense lights are located in the duration between September to mid-April. So, if you want to see them with beautiful hues, wait till winter.

What is Southern light?

As northern lights, southern lights are seen in the south pole of the earth. The scientific name of a southern light is aurora australis. These are similar to aurora borealis, but scientists found some differences between them.

Southern lights, just similar to northern lights, have beautiful patterns of colorful lights. The reason for the formation is solar storms in both cases.

The earth’s magnetic field remains weaker at the poles, which is why the north and south poles are the places where solar particles transform electrical energy into light energy and create these fascinating phenomena.

However, northern lights are the superstars if we compare both; this is because of the complexity of finding the best places to see southern lights due to fewer landmasses.

What Is the Best Time to Visualize Southern Light?

As we discussed earlier, a long dark night is the best time to enjoy the fulfillment of visualizing this colorful glimpse of hues.

Winters are the best time in both cases; however, southern lights are visualized better from June to August. This is perhaps due to the darkest nights seen during these months.

What Is the Difference Between the Northern Lights and Southern Lights?

The aurora borealis is seen in the arctic region and has significant landmasses to recognize these lights with their full intensity. Whereas, southern lights are located in the Antarctic area, and due to significantly less existence of life, discovering the best region is a bit tricky.

We know both auroras are formed as a result of solar particles and the earth’s magnetic field. And that’s why scientists had been thinking of these two glimpses of lights as the mirror image of each other.

But the reality got exposed in 2009 when scientists from both poles took pictures at the same time to see whether that fact is actual or not. And found that these curtains of lights have different shapes and patterns.

The main reason behind this dissimilarity is due to a change in the shape of the earth’s magnetosphere due to compression from the solar wind. This elongated or extended tail-like structure on the magnetic field on a planet (in this case, earth) is formed at the part against the sun. This is known as magnetotail.

So, when charged particles from the sun’s atmosphere reach the earth’s magnetosphere, they produce an uneven pressure on the magnetotail region. As a result, both polar auroras get displaced from their position slightly, which causes a difference in the pattern of lights on two opposite poles.

What Are the Best Places to Visualize Both?

There are several spots near the arctic circle to glimpse the northern lights, but you will notice very few scenes to satisfy your fantasy of perceiving southern lights. Let’s see the best destinations for both.

You can discover charming patterns of northern lights in countries like Alaska, Norway, Finland, Sweden, Iceland, Greenland, and also in Canada.

There are specific locations that are familiar for the most beautiful hues in the dark sky. You can plan and visit these places and easily take advantage of those experiences.

Both southern lights on the south pole and northern lights on the north poles are similar in all aspects, just differ in some fundamental ways. However, both are enchanting, and you will feel relaxed after seeing that magnificent scenery of the endless dark sky.

If you are planning to visit the northern lights soon, then we have a suggestion for you. You can go there in 2025. This is because the most delightful specks of colors are seen every 11 years of the solar cycle, and the last time it was seen was in 2013. You can see this next year as well, but a very less-frequent version.

So, if you want to capture the best moment of such dancing hues all over the sky, then it will be best to wait for its ideal time.

We hope you have cleared all of your queries regarding the differences between northern lights and southern lights. If you want to ask further, comment down below. For more such informative articles, follow us!