Of all the places in the world, none are as captivating as the grasslands and jungles of Africa. Apart from the fascinating variety of plant life, the second largest continent in the world is also home to the most majestic of animals. From the hippopotamus to the dung beetle, Africa is the ultimate animal hub. Keep reading to know more about types of African Animals. This term has a rather dark past since it was first coined by big-game hunters for the animals most difficult to hunt. But in recent years the term has lost its initial meaning and now refers to the five most magnificent types of African animals. They are as following:

One of the only big cats capable of purring, leopards are closely related to lions, tigers, and jaguars. Unlike their relatives, leopards are excellent climbers and spend most of their time in trees. Thanks to their spotted coats, which help them to camouflage in the leaves, leopards often hunt from these trees. Once they spot prey, they make an inescapable pounce on the animal and drag it up into their tree! Doing so keeps the kill safe from scavengers such as hyenas. 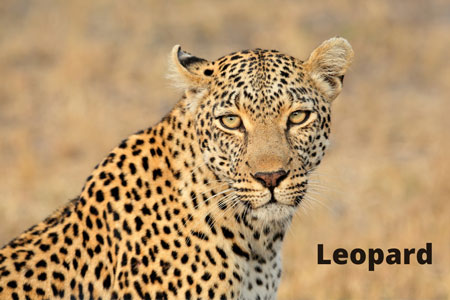 Apart from their good hunting skills, leopards are nocturnal and also one of the fastest animals on the planet. They are found all across East and West Africa, and also in the sub-Saharan regions. Loss of habitat has threatened the lives of leopards, and only ~12000 of them are in the wild today.

Revered all over the world, lions have been a symbol of courage throughout history. But apart from being powerful animals, lions are also one of the most intelligent cats. They live in pride, usually consisting of two to forty lions, and are led by a single male lion. Female cubs stay with the pride as they age, but male cubs grow up to eventually form their group. Lionesses are the pride’s main hunter.

If spotted by enemies or predators (the only predator to a lion is humans), lions prefer to face the challenger. The best way to see lions in action is to go on a safari trek since they’re found across Africa. Unfortunately, there aren’t many lions left in the wild today. Only an estimated 25,000 are in Africa today, and the biggest threat they face is us, humans.

The deadliest and strongest of the Big Five, there is no animal more dangerous and unpredictable than the African Buffalo. Weighing seven hundred pounds and six feet tall, this animal is also massive in size. It has two distinctly shaped horns and is the only bovine species that is not domesticable. Cape Buffalos graze in thousands in Sub-Saharan Africa. Interestingly, this animal has a natural tendency to fight lions simply for the fun of it. 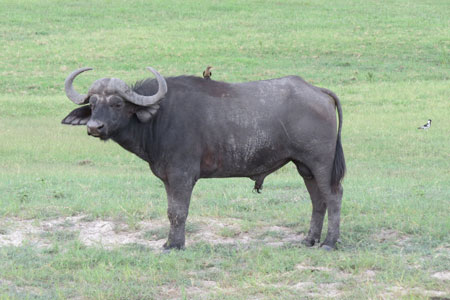 They eat grass in bulks and spend considerable time in mud- which removes parasites latched onto their skin. Birds such as oxpeckers often sit on their backs and eat fleas and lice. Cape Buffalos are found near water, across East and South Africa. Compared to other members in this list, Cape Buffalos are in greater numbers (400,000), but are “nearly threatened” according to the IUCN.

An interesting fact about rhinos is that they cannot see very well. Combined with its aggressive nature of attacking anything unfamiliar, they often end up charging at trees and rocks. But the lack of good eyesight is made up by their strong sense of hearing and smell. Black rhinos have two horns on their nose, one large and one small. The large horn is used for fighting and asserting dominance. These horns can break but will regenerate- just like our fingernails. 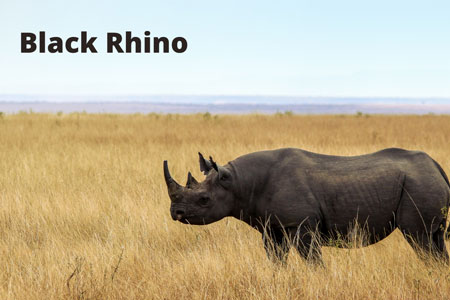 Baby rhinos reach maturity by the age of two, and they usually leave their mother’s side by then. Rhinos are one of the oldest animals in the world (almost 50 million years old), and are also known as “living fossils”. Unfortunately, they are hunted for their horns (believed to have medicinal value) Which has resulted in only 5000 rhinos being left in the wild. Because of this, one can only sight these animals while on a safari trip.

Something which many people underestimate is how fast an elephant can run. For the record, it is 40 kph- an amazing speed for its massive size. Elephants also have an important role in their ecosystem. They use their trunks to create watering holes, their dung has a lot of seeds, and they create large pathways. African elephants keep themselves cool by spraying their bodies with water in their trunks. They can also radiate heat through their large ears!

In contrast to lions, elephants live in female-led groups. Their trunks have 40,000 muscles and can suck 7.5 liters of water at a time. Their diet composes mainly of grass and fruit. The tusk is a tooth that keeps on growing throughout their lives. Sadly, it is for their tusks that elephants are killed. The number of elephants has reduced dramatically from 1,300,000 in the 1970s to 400,000 today.

Other Types of African Animals

Apart from the popular African animals, there are thousands of other creatures not known to many people. Several of them are approaching extinction and despite precautions and attempts to revive species number, some of them already have. Here are some of the rarest animals indigenous to Africa: 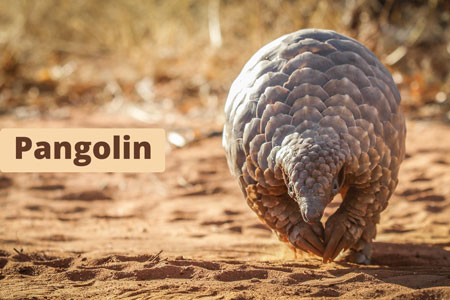 This tiny animal, often mistaken for a reptile, is a mammal. Its body is covered with scales, and it is one of the most sought out animal parts (for medicinal purposes). Pangolins have an exceptional sense of smell and can detect their prey under multiple layers of soil. They are harmless to humans but have been hunted excessively in the past, resulting in them becoming critically endangered species. 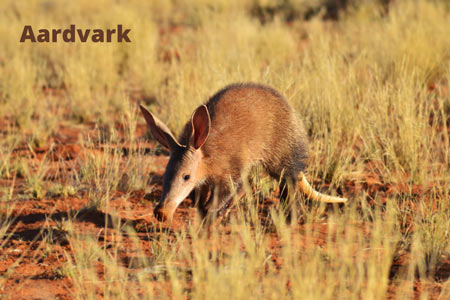 There are very few animals with no close living relatives- examples include aye-ayes, humans, and of course, aardvarks. Surprisingly, this relatively small animal’s closest relative is an elephant! Aardvarks resemble pigs, mainly due to their long snouts. They have large front claws and can dig 8 feet in under a minute. Their diet comprises only ants and termites, and they can eat up to 50,000 of them in a single night. 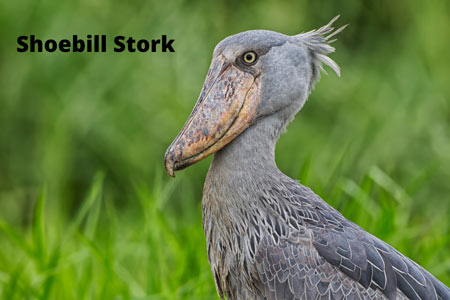 Shoebill Storks have somewhat of a prehistoric look and have a distinctive beak measuring afoot. It preys on a variety of animals, consisting of baby crocodiles, snakes, eels, and other large animals- thanks to its large beak. Another special feature is its ability to stay motionless for intensively large durations- this is a tactic it uses while hunting. Habitat loss is a major threat, and today there are only about 4000 of them left in the world. 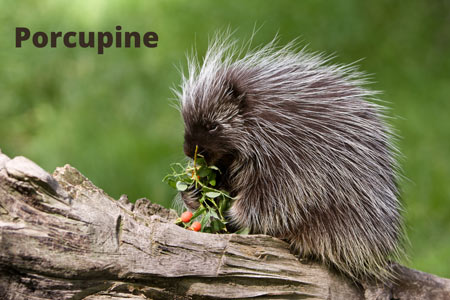 Contrary to popular belief, porcupines cannot voluntarily shoot their quills like arrows. They are the largest rodent in the continent of Africa, and their size is quite big and you won’t associate it with a mouse. Porcupines have soft hair on their back and it is their tails that have sharp quills. The quills stand up when the animal feels threatened and can fall easily. They regrow after a while.

There are many more types of African animals, we have listed some of them. If you like this article share it with your friends and family members.

Top Famous NGOs in The World