We have heard the term season several times before. However, we become curious to know why there are different types of seasons in the world. Seasons are the period when we feel a particular type of climatic conditions like atmospheric temperature, humidity, rainfall, wind speed, and altitude.

A question kids often ask is how many types of seasons there are. And finally, we get amazed to see different seasons in different parts of the world. Moreover, it brings us to the breakthrough question — why do we have seasons on earth?

We can understand the answer to all these queries with the concepts of earth, sun, and imaginary lines. And here, in this article, we will describe the entire concept of the season and how they are changing with the months. Let’s jump right in!

Why Do We Have Seasons on Earth?

Before diving deeper into the types of seasons, let’s grasp why we even have them on earth. It all starts with the earth, sun, and the different imaginary shapes such as axis and orbit.

We all know when the earth remains in the sun’s direction, it’s the daylight in some part of the earth. And when the reverse happens after the earth rotates on its axis, it’s night. It takes 24 hours.

And with each subsequent rotation, day after day, the earth completes its orbit around the sun in 365.25 days — that’s an entire year.

We feel the same seasons each year at a particular time because of the same climatic conditions due to the earth’s position in front of the sun.

So, when the earth remains near the sun, it’s summer. And when the planet goes far from the sun, it becomes winter. It’s not always the case, which we will discuss below.

But, what does it mean by going near and far if the sun is situated at the center of the orbit?

The orbit of the earth through which it surrounds the sun is oval in shape. And the sun is not situated to the complete center.

So, when the earth comes near the sun while revolving, it gets the most of the sunlight, causing the earth to increase the temperature. And due to the rise of temperature, some other climatic scenes are seen. This causes summer. And the opposite happens when the earth moves far from the sun’s position.

Now, a question comes, if it’s the case, then we must have the same season in a different part of the world — which is not valid.

We feel different types of seasons in another portion of the world because of its inclination. Yes, our earth is slightly tilted with an angle of 23.5 degrees.

So, when we are near the sun, the Northern hemisphere gets the least amount of sunlight, causing it to be cold. And we feel winter there.

However, the southern hemisphere gets a lot of sunlight directly, causing it to be hotter than other times of the year. And it’s called summer.

The same thing happens when the earth revolves and reaches a point where the earth’s southern hemisphere gets less sunlight, hence having a lower temperature. And the northern hemisphere receives the most sun heat causing it to be the summer.

Also, between the summer and winter, our earth reaches a time when there’s an equal amount of sunlight falling to both hemispheres, and hence we feel neither too hot nor too cold. If we observe the overall climatic conditions throughout the year, there are three major types of seasons — Summer, Rainy, and Winter.

However, there are four primary types of seasons all around the world. These are as follows;

The Summer Solstice is when there is a transition from cold to hot weather. This day is the longest day of the year, generally falls on the 20th or 21st of June in the Northern part and 21st or 22nd of December in the southern region.

Why does the day become the longest at this time? This is because of the 23.5-degree inclination of the earth’s axial line.

As the earth is tilted, a particular portion (northern or southern) gets most of the light, causing longer days and shorter nights. And such days feel like summer with dry, hot weather.

The regions between the north pole and equator experience summer from June to August. However, the southern hemisphere experiences summer from December to February. Autumn or fall is before winter when we neither feel hot nor cold. The temperature almost remains the same. Autumn starts from the autumnal equinox — the day of the year when the sunlight falls equally on the two hemispheres of the earth.

We experienced the autumnal equinox on 23rd September in the North and 21st March in the opposite areas.

Further, the months we call the autumn season are September, October, and November in the Northern Hemisphere and starts from March through May for the southern half. 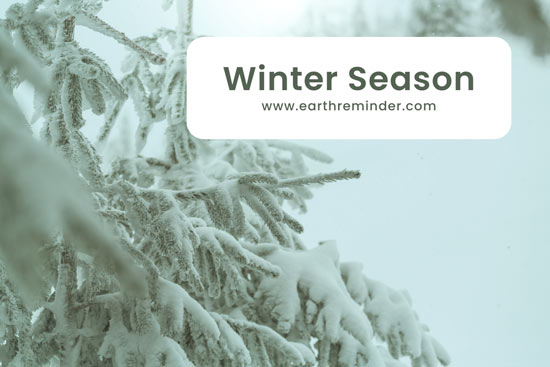 This time, the south part of the earth gets the least amount of heat and temperature due to the tilting occurrence of the planet. And a short portion remains dark, causing shorter nights.

The winter months in the Northern Hemisphere are December, January, and February. While June, July, and August have the coldest weather in the regions between the equator to the south pole. If we observe the last type of season, it begins after winter. The three months representing spring in northern areas are March, April, and May.

The weather conditions remain the same as in Autumn, with the equivalent heat and humidity in the atmosphere.

Similar to Fall, Spring or Vernal climate begins with an equinox that occurs on 22nd or 23rd September in the Northern half while on 20th or 21st March in the Southern hemisphere.

During this period, the sun provides an equal amount of light to both hemispheres.

Also Read: Why the Earth is Called Green Planet?

The two theories that show the same climatic conditions in different regions each year are the discovered ones. Both approaches represent a unique angle for these natural phenomena.

However, the gradual warming of the earth is causing the climate to show differently rather than it shows naturally. That’s why, nowadays, we are feeling stormy or rainy weather in winter—or even experiencing high temperatures in spring.

This has a high amount of adverse effects on our mother nature. And if we can’t do anything now, the day might come when we can’t see our earth as a blue-green planet anymore. That can destroy our existence, too.

In the above article, we have studied;

If you have any queries, please comment down below. Also, share it with your friends and family.