Everything You Need to Know About Volcanoes: Volcanoes are the source of some of nature’s most powerful eruptions. They can reshape the land, create new mountains, and wipe out entire cultures. But what are volcanoes? Where do they come from? And why are there so many different types of volcanoes? We’re here to answer all your questions! When you think of volcanoes, what do you envision? The fiery hot lava that spews from the crater? The ash and toxic gasses in the air? Here, we will discuss everything you need to know about volcanoes. From their formation to eruption patterns, this article has all your volcanic needs covered!

Volcanoes are openings in the planet’s crust that allow molten rocks (magma) and gasses trapped beneath to escape. The forceful ejection of lava and gasses often result in a relief on the planet’s surface, which appears in the form of a hill or mountain. The resulting structure is what we call a volcano.

Note: The thick blazing hot liquid made up of molten rocks beneath the surface is called magma. When magma reaches the surface, it is called lava.

What Are the Characteristics of Volcanoes?

What Are the Main Parts of a Volcano?

A volcano may seem like a single structure rising above the ground from the outside. However, it consists of several parts, from the top of the opening to the magma chamber inside. Let’s learn about different parts of the volcano in detail.

Different parts of a volcano are; A hollow space deep within the volcano where magma accumulates over time is called a magma chamber.

During an eruption, the material and gasses accumulated in the magma chamber come out violently to the surface and cause the explosion.

Rock Layers form the base of the volcano. These are the parts of the upper crust of the planet that floats on the mantle. It’s the fractures in the layers of the rock that give way to magma to rise to the surface.

Conduit is simply the pathway that connects the magma chamber to the opening at the surface.

During an eruption, the magma in the magma chamber rises through the conduit or volcanic chimney to the surface.

Due to the enormous pressure of the rising magma, rocks along the conduit sometimes break off and erupt violently with the magma.

There could be some sideways cracks beside the main conduit pipe inside the volcano.

Rising magma from the magma chamber may move through these cracks branching the path further. It leads to the formation of branch pipes.

Vents, fissures, or crevices are the opening on the surface of the planet’s crust from which magma and gasses escape.

These raptures are formed due to the intense pressure exerted by the rising magma and gasses. Volcanoes can have more than one vent, but each of them contains a main central vent.

When magma reaches the surface moving through the branch pipe, instead of the main conduit pipe, it creates a second opening.

The secondary opening through which magma reaches the surface is called a side vent.

Bowl-shaped depressions at the top of vents of volcanoes are known as a crater. Craters are generally round in shape; however, different types of volcanic craters are unique in shape and size.

Interestingly, a volcano can have more than one crater. It’s the case with secondary cone volcanoes, and the second crater is usually called a lateral crater.

The cone-shaped structure formed due to the accumulation of lava and other materials from the volcano over several eruptions is known as a volcanic cone.

The thickness of a volcanic cone varies depending upon the number of eruptions a volcano has undergone.

The throat is the upper part of the conduit pipe. It’s the pathway just below the vent from which lava and volcanic gasses come out to the surface.

The lava flow is the stream of lava that flows through the sides of the volcano called the lava flow.

Depending upon the viscosity of the lava it can move freely to several kilometers or sluggishly to a few meters only before solidifying.

When a volcano erupts violently, it sends up the skies huge quantities of materials, including lava, rocks, gasses, and ashes. The upwards moving material – dust, gasses, and ash form a cloud generally termed as ash cloud.

Layers of Lava and Ashes

How Does a Volcano Form?

Volcano formation is linked with the functioning of tectonic plates. Earth’s crust is not uniform throughout its length – it consists of layers.

The topmost layer is where we live, and beneath it is the mantle. Mantle comprises very hot molten rocks known as magma. The top layer, also known as the tectonic plates, floats over the mantle.

When two tectonic plates collide with each other, they create convergent plate boundaries. During the collision, the denser plate’s edge is often pushed beneath the less dense plate in a process known as subduction.

The edges of the downward-moving plate heat up due to enormous friction, which causes the rocks to melt, forming magma. Pressure build-up forces the magma to move towards the surface and results in an eruption forming a volcano.

The Ring of Fire in the Pacific lies in the subduction zone and hosts around 425 volcanoes or more.

When two plates move away from each other, they form divergent plate boundaries.

Moving plates often result in vents or fissures that give way to magma and allow it to move upward, forming volcanoes.

Example: Mount Kilimanjaro in Kenya and Mount Nyiragongo in Congo are located at divergent plate boundaries.

Also Read: How Was the Planet Earth Formed?

What Are the Different Types of Volcanoes?

While lava and ashes are the typical characteristics of almost every volcano, they differ in their formation and eruption. Depending upon their shape and formation, volcanoes can be of six types;

Fissure Volcanoes or linear volcanoes are usually found along the oceanic ridges and, in rare cases, on land. 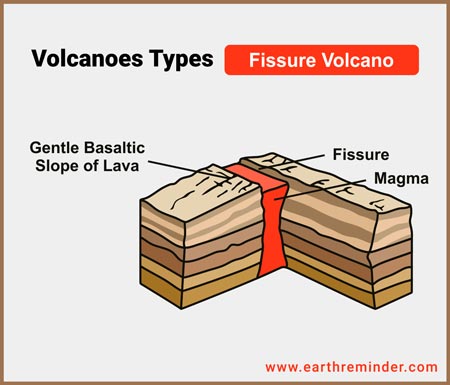 The main characteristic of a shield volcano is its shape of an inverted shield. 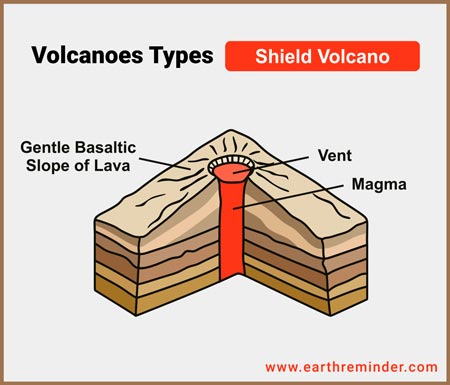 Very thick lava that could not move too far beyond the crater gave rise to the dome volcano.

Cinder cone volcanoes typically rise 300m to 500m and form by the fragmented and erupted ash that falls near the chimney or vent. 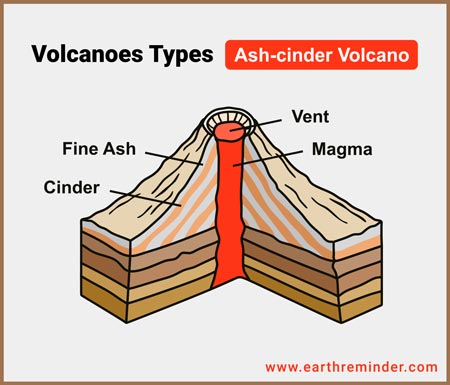 Composite volcanoes are also known as stratovolcanoes due to their peculiar characteristics of layers of solidified material. 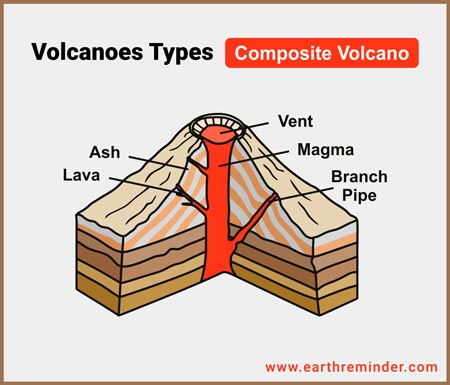 Caldera is a cauldron-like structure formed when a volcano erupts and creates a depression.

What is Volcanic Eruption?

The forceful and violent ejection of lava, gasses, and rocks from a volcano is known as a volcanic eruption.

The eruptions result from the pressure build-up due to magma moving from the mantle to the magma chamber inside the volcano.

How Are Volcanoes Classified?

Volcanoes are classified depending upon their activity. By this definition, volcanoes can be;

These types of volcanoes have not erupted in the recent past.

But they show some signs of activity like hot springs or fumaroles (holes on Earth’s surface oozing steam and Volcanic gasses). 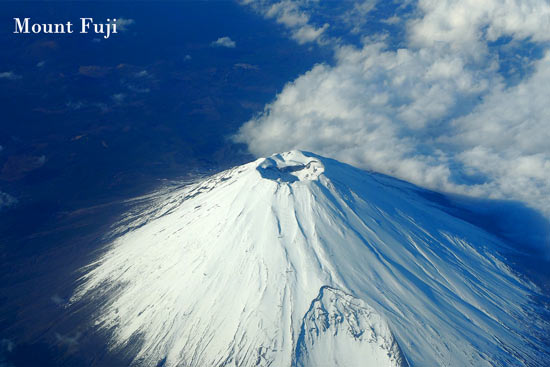 Although dormant volcanoes haven’t erupted for quite a long time, they can explode in the future.

Extinct Volcanoes have minimal chance of eruption in the future. A volcano is considered extinct if there has been no eruption for thousands of years.

However, there is no guarantee that an extinct volcano may not wake up and become active someday. Examples of extinct volcanoes: Mount Thielsen, Oregon, US, and Mount Slemish, Antrim.

What are the Different Types of Volcanic Eruptions?

Volcanoes can also be characterized by the kind of eruption that occurs from them. Based on eruptions, volcanoes can be divided into six types; 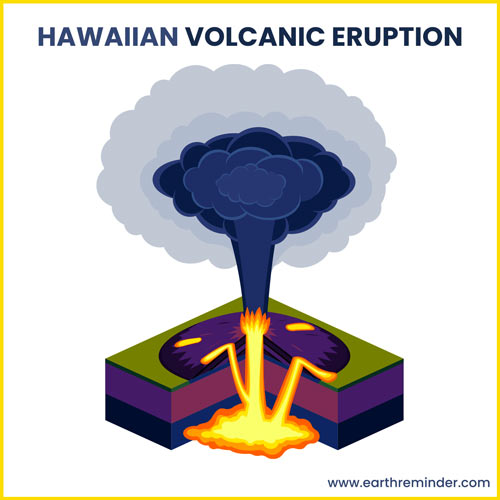 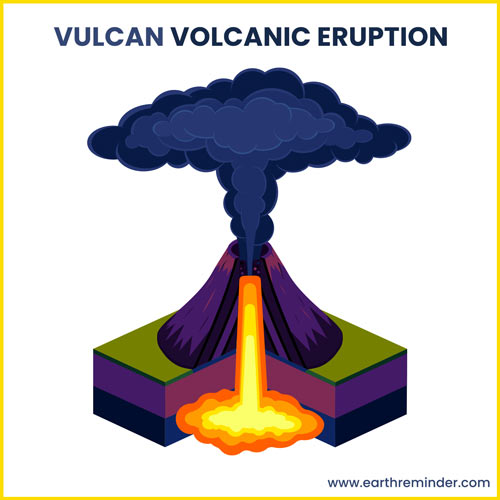 Volcanoes are one of the most majestic yet violent structures on a planet. On Earth, different types of volcanoes constantly shape the planet’s surface and depth of the ocean, destroying the old and giving rise to new structures. A gateway connecting the blazing depth of Earth’s mantle to the surface, volcanoes bring essential minerals to the surface, making it possible for life to thrive.

How Does Energy Flow Through an Ecosystem?