Types of Bioremediation with Examples:

In ancient times, when the environment was completely pure, people lived healthier and happier life. However, nowadays, our earth is in a hazardous condition. As a result, the atmosphere, hydrosphere, biosphere, or lithosphere, everywhere contaminations are present, taking us deeper into the destructive track. 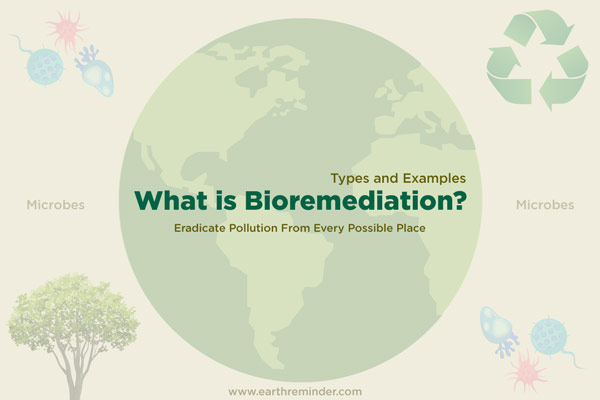 We are not only devastating our environment but developing a way of killing ourselves with deadly diseases. When humans become aware of such ecological contamination’s negative impact, various research and development innovate a stable solution. However, bioremediation is the best out of those discoveries the scientists made ever.

Now you may wonder: what is bioremediation? It is the process of utilizing omniverse microorganisms to eradicate pollution from every possible place in our environment. This is the most dynamic way of using biotechnology in ecology. And hence, in this chapter, we’ll explore the main concepts of bioremediation, its types, and will understand the topic better with suitable examples.

In other words, it is a part of biotechnology that deals with the elimination of environmental contaminants by using microbes—the main biological agents. Thus, the microorganisms used for the degradation of such pollutants are called bioremediates.

Nowadays, the food we are eating, the water we are drinking and using in several other works, the air we are breathing, or the land we’re living on, everywhere pollutants are present.

According to a study of the environmental protection agency (EPA), only a minimal amount that is 10% of wastes are disposed of correctly. From this, we can easily conclude how much pollution exists in our ecosystem.

There are commonly five different kinds of contaminants, such as munitions wastes, organic solvents, halogenated aromatic hydrocarbon, pesticides, and Polyaromatic hydrocarbon (PAH). Thus, for removing such pollutants, the bioremediation technique is the most sustainable method. It does its work without affecting our environment and in an economically friendly way.

Furthermore, the microorganisms used here are generally anaerobic, aerobic, or filamentous bacteria (actinomycetes) and some fungi too.

Bioremediation’s first commercial application was made in 1972 for the Sun oil pipeline spill in Ambler, Pennsylvania.

However, In the mid-1980s, the researchers emphasize the bioengineering of the microbes used in the bioremediation process, which didn’t reach the goal it had.

After that, in the mid-1990s, scientists changed their minds and switched to better reliance on natural microorganisms and techniques to boost their functionality.

So, various factors necessary for the process of bioremediation are as follows; The mechanism or the working procedure of bioremediation is based on the activity of microorganisms we use. Those living organisms degrade and take the organic compounds such as carbon, electrons, source of cell-building materials, and energy source for their growth and reproduction.

First, the contaminants are analyzed, and microorganisms are chosen according to the constituents present in that so that they can digest the pollutants easily. For this, the microbes are firstly examined, cultured, and placed in the polluted environment.

Moreover, the microbes then grow enormously and consume all the organic nutrients they found in the waste and convert them into carbon dioxide and water. We can take measures to improve the conditions.

After knowing “what is Bioremediation,” now let’s know the various types of bioremediation. Bioremediation can be classified according to the strategies applied, the microorganisms used, and the degradation process types.

Based on strategies applied:

So, according to the strategy employed, the types of bioremediation is of two types such as;

In situ, bioremediation is a strategy where, without excavation, we can treat the associated groundwater together with soil in place. The in-situ remediation process extent from a partially closed system to a completely open system. Examples of these techniques involve percolation, bioventing, air sparging, pump and treat, and bio-slurping.

Percolation comprises of put on water, having nutrients and perhaps a microbial inoculum, to the exterior of a polluted part. It permits to filter into the soil and blend with the groundwater. However, Bioventing is a technique of aeration of an unsaturated area by installing a well for drawing a vacuum on the soil with the associated blowers and pumps.

Furthermore, Air sparging is just the opposite of bioventing, otherwise called biosparging. It is the aeration of a saturated area with contaminated soil by a flow rate of <5 m3/h per point.

Also, the pump and treat are an in-situ technique where we can remove and treat contaminated groundwater.

Bioslurping is another strategy for purifying groundwater and soil (having pollutants like petroleum hydrocarbons) by combining bioventing of surface soil with vacuum-enhanced free products.

Furthermore, the ex-situ Bioremediation is just opposite to the in-situ technique.  Here the contaminated soil and groundwater are taken out from their original location for treatment. Some examples of ex-situ bioremediation are Land farming, compost piles irrigation, and engineered biopiles.

In the land farming process, we use the blend of volatilization and biodegradation with indigenous microbes to treat the soil contaminants by degrading or transforming them.

For enhancing water and air holding capacity, and physical handling properties, we supplement the soil with composting elements like manure, wood chips, straw, etc. This is the process of compost piles.

In other ways, an ex-situ remediation technique where the contaminated soils are situated into piles or cells above the ground and the microbial activities are stimulated with aeration or addition of nutrients.

Hence, we can employ both the in-situ and ex-situ to unsaturated or saturated regions, but there are some limitations for each technique.

According to the microorganisms used, bioremediation is classified into three types: Bacterioremediation is a type of remediation, where bacteria are bioremediants and can treat various kinds of pollutants through in-situ or ex-situ techniques.

Phytoremediation utilizes several plants to stabilize, remediate, reduce, or restore contaminants in sediments, soil, water, etc. As these plants can store the heavy polluting metals in their tissues, industries apply various techniques such as phytoextraction or phytoaccumulation, phytotransformation, or phytodegradation, phytostabilization, phytovolatilization, rhizofiltration, and rhizodegradation.

For decontaminating a zone, if we use various fungi types, then the form of bioremediation is called mycoremediation. Furthermore, a fungus is much known for its degradation properties by their fungal mycelia and hence developed this technique.

Based on Types of Degradation:

So, based on the principle of degradation, bioremediation is of two types;

In the biotransformation process, various organic components are partially degraded, and the remaining portion is transformed into various other organic matters.

Biomineralization is another type of bioremediation where microorganisms digest and convert organic waste nutrients into inorganic materials like water, carbon dioxide, etc.

Various examples of bioremediation are there, which will assist us in understanding “what is Bioremediation.” We already discussed several examples above in the in-situ and ex-situ techniques; besides them some other cases are;

In the biostimulation process, the stimulation of existing microorganisms occurs by modifying the environmental conditions. Thus, by adding some electron acceptors such as phosphorous, carbon, oxygen, or nitrogen and some nutrients (which limit the rate of microbes), we can easily create a natural stimulation.

Bioaugmentation is another excellent instance of bioremediation. It involves using autochthonous or allochthonous (wild or genetically modified) microorganisms to treat harmful contaminants in the site. However, the oil-contaminated environment is most suitable for it.

Permeable reactive barrier uses the in-situ bioremediation technique developed to intercept and remediate a polluted plume. This process uses various materials and methods to treat multiple contaminants through physical, chemical, or biological processes. So, in this natural process, researchers use indigenous bacteria with inducer oxygen as organic material.

Advantages and Disadvantages of Bioremediation

There are lots of advantages and disadvantages of bioremediation—an entirely natural process. Let’s have a closer look at them.

Various advantages of it involve:

After knowing its various advantages, let us know several disadvantages of it:

Bioremediation is a thriving technique for eradicating biological contaminants like crude oil, herbicides, pesticides, petroleum products, solvents with halogenation, and much more.

Suppose we adjust some requirements for this process and create a local environment for the growth and reproduction of indigenous microorganisms. We should accomplish the process at a very low expense and not negatively affect our environment.

Moreover, Various other research and developments are going on to develop exclusive economic and environment-friendly techniques. This can be helpful in the degeneration of hazardous pollutants that are unable to degrade before.

Here all points we covered to make you understand what biodegradation is and its types and the limitations of this process. If you still have any queries don’t forget to ask; we always answer.