Which birds cannot fly? It’s a question that may baffle some because whenever we talk about birds, we always look up to the sky. It’s because we inherently assume that all birds fly. But it’s not always the case. There are about 60 species of birds that cannot fly. They have long lost their ability to fly and now reside on land just like other animals. Different flightless birds have different characteristics and particularities. However, there are some common traits that most of the non-flying bird’s species share;

Some species of flightless birds are common knowledge, while others are not generally known. Here is the list of some of the most common birds that cannot fly but can run very fast with names and pictures.

Perhaps the most well-known of all birds that cannot fly might be – Ostrich. Native to Africa, Ostrich is the largest flightless bird and can reach up to 180 kg in weight. They compensate for their inability to fly by running very fast. Interestingly, an ostrich can reach a speed of up to 90 km/hr. They use whatever tiny wings they have to gain momentum and also as an equipment to ward off predators.

Ostrich can’t fly because, in the long course of evolution, they have developed traits that help them survive on land. When there was no need to fly, Ostrich slowly lost features that helped them in flying. Their wings grew shorter, and their keel that helped flap wings disappeared. Similarly, they developed strong skeletons, big bodies, and powerful legs that enabled them to run very fast.

Although Ostrich still has small wings, they are neither too strong to support its massive body nor connected to strong pectoral muscles that could power the flight. Instead, Ostrich uses their wings to gain momentum and ward off enemies.

Emu is the second largest flightless bird in terms of height and belongs to the genus Dromaius. Furthermore, they belong to the ratite family, similar to rheas, ostriches, and cassowaries. They are native to Australia and could reach a height of around 1.5 meters. Moreover, they are massive too and could weigh about 37 kg. Similar to Ostrich, Emu can run very fast. 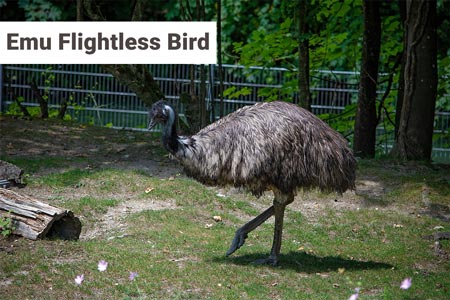 How Fast Do Emus Run?

Emus are large birds with strong legs. They can’t fly but can run very fast. Although they cannot match the speed of their cousins like Ostrich, they still run with incredible speed. As a matter of fact, emus can run as fast as 50 km/h.

Rhea is similar to Ostrich in build as well as running speed. In terms of speed, Rhea can run as fast as 65 km/h. 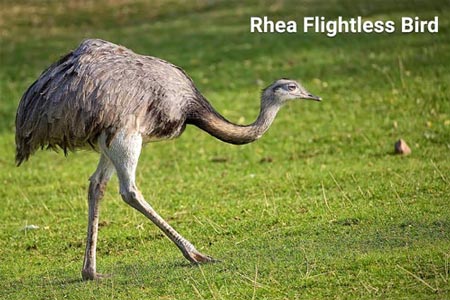 Here are some facts about Rhea that will amaze you;

Don’t confuse it with the fruit – there is also a flightless bird named Kiwi. Kiwi is native to New Zealand and is its national bird. Kiwi is of small size, comparable to chicken. 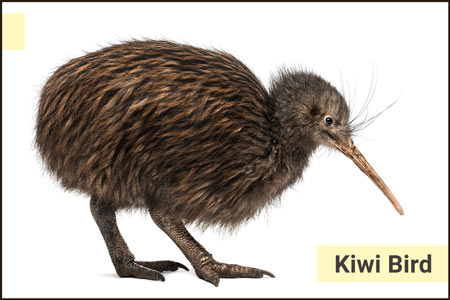 There are five known species of Kiwi, and all are limited to New Zealand only.

Do Kiwi Birds Have Wings?

The body of the Kiwi is covered with small thick feathers and has almost non-existent wings. Kiwi is a nocturnal species and could eat anything – that is, they are omnivorous.

The Tasmanian Hen is a flightless bird found in the Australian state of Tasmania. 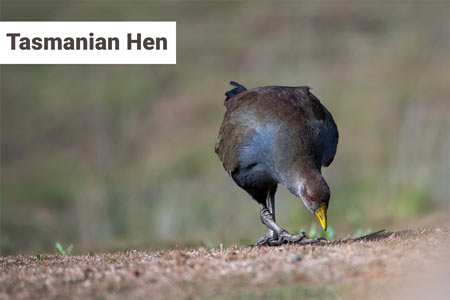 These birds have small heavy bodies with short wings. Furthermore, these birds live in small flocks, and although they can’t fly, they are very adept at swimming and running. They use their shirt wings to balance their body and achieve a speed of about 50 km/h.

Rallo of Guam is a small flightless bird that is an inhabitant of the island of Guam in the Marianas archipelago. The locals also called these birds Ko’ko.

They are unable to fly because of their underdeveloped wings and muscles. However, it does not pose any risk to their existence because there are no natural predators of these birds.

Here are some facts about Guam that may amaze you;

Why Is the Guam Rail Endangered?

Guam rails are native to Guam island. There were only a few natural predators of Guam rails on Guam island, and therefore they thrived. But things changed with the introduction of the brown tree snakes on the island. Guam birds with no experience with brown tree snakes and no evolutionary tactics to fend off their attack fell easy prey. Soon the population of Guam rail dwindled to the point of extinction.

Another non-flying bird that calls Australia its home is Cassowary. Additionally, they are also found in New Guinea. The Cassowary is the third tallest bird after Ostrich and Emu. Moreover, they are the second heaviest birds too. Similar to Ostrich, Cassowary also can run quite fast.

Cassowary can run at a speed of about 48 km/h. They are very strong, and besides running, they can also swim efficiently. Despite their bulky bodies and ability to run fast, Cassowary is now nearly extinct. The Australian Southern Cassowary is the most endangered, with only around 4500 birds left in the wild. 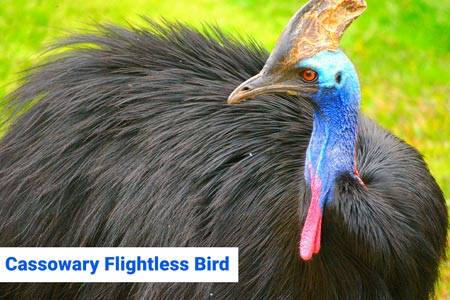 Recommended Read: What Can We Do to Protect Endangered Animals?

How Much Does a Cassowary Weigh?

Cassowaries may not be the heaviest birds, but still, they are quite bulky. In fact, females are heavier than males. On Average, Cassowary weighs around 48 kg. However, some females could weigh approximately 55 kg.

How Big Is a Cassowary Bird?

These are bulky and well-built birds – males could reach a height of 1.65, while females could grow 1.75 m.

Cassowaries have small wings, but they are pretty good at camouflage, and their black body helps them hide easily among trees. Moreover, they also have horn-like growth on their head, which they use to defend themselves from predators.

Another well-known bird that does not fly is Penguin. They are part of the Sphenisciformes family and include 18 species. Penguin’s population is mainly spread across the southern hemisphere. 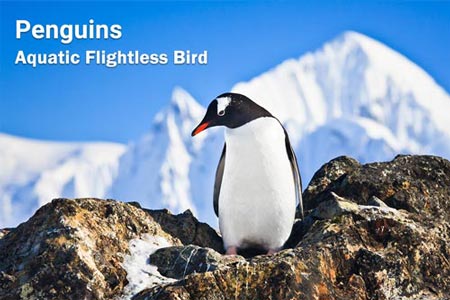 The short wings that they use for swimming, instead of flying. Additionally, they can trap air in their wings that help them push out of the water and move on land.

Penguins are flightless birds, and the habitat they are found in is mostly ice or water. Therefore, through evolution, they have developed bodies that are more adept at swimming rather than flying. Penguins’ wings are quite short and shaped like flippers that help them underwater. They are also much thicker than normal wings, allowing Penguins to push through the water. Also, instead of hollow bones, Penguins have a solid heavy bone structure that also allows them to dive deep underwater. All these evolutionary developments enable them to swim fast but not fly.

Takahe is also found in New Zealand, mainly in the alpine grassland. They are slow-moving birds and could reach a length of 65 cm and a weight of around 3 kg. 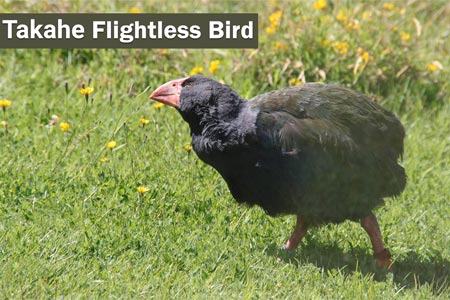 Their wings are too short and cannot support the weight of their body. That’s why they resided on land. Takahe is an endangered species, and currently, there are only about 300 Takahe in the world.

The Magellanic steamer is a species of duck that does not fly. They are found in South America, specifically in the Tierra del Fuego area. 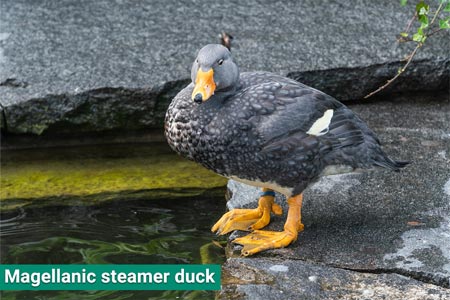 Unlike their other well-known cousins, they neither have big bodies, nor they can run very fast. But Magellanic steamers are excellent swimmers and spend most of their life swimming and hunting in water.

Also Read: Why Are Birds Important to the Environment?

Roadrunners can fly to some distance, but they mostly spend their lives on land. 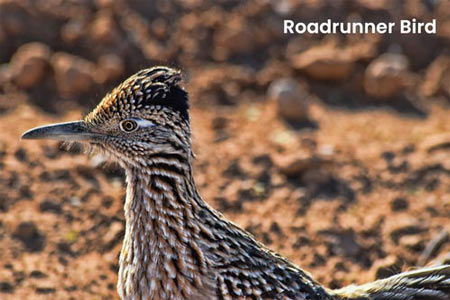 How Fast Can a Roadrunner Bird Run?

Additionally, they are good sprinters and can run at a speed of about 32 km/h. Their long slender body and shorter wings allow them to run very fast on land.

Modern birds have primarily evolved to fly. Through evolution, they have developed traits that help them fly. But there are certain birds that cannot fly. These birds live on land similar to other land animals. Some are well known, like Ostrich and Penguin, while others, like roadrunners and Tasmanian Hen, are not so commonly known. Although flightless birds cannot fly, they have evolved traits that help them survive on land. Some can hide well, some can run very fast, and some are good swimmers.