Why earth is called green planet?

We all live on the heavenly body, which is referred to as the earth. Although it is not a colossal body when compared to some other celestial bodies, it has that one thing which found nowhere even in the entire universe discovered to date. Can you guess it? It is our existence on earth that makes it unique and incredible. 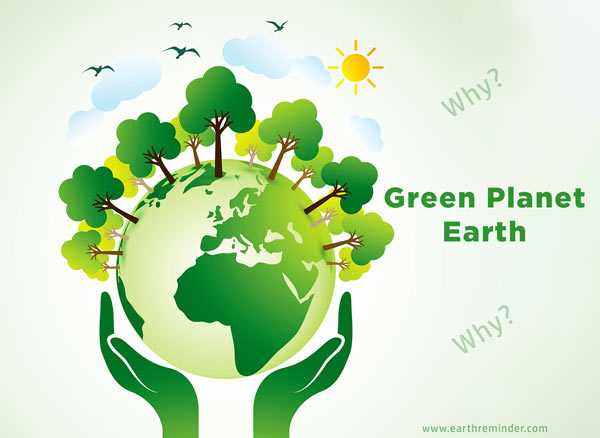 Many factors distinguish this beautiful blue planet from other heavenly bodies, such as planets and stars.

Why Is the Earth Known as Green Planet?

So now, let us look at some factors because of which the earth looks green-

Our earth is considered a “green” planet for many reasons; vegetation is one of them. If you will look at earth from very far, on the internet or image of the earth in your textbook, you can easily notice another dominating colour apart from blue, that is green.

As mentioned earlier, it is the presence of plants, microorganisms such as algae, etcetera that make the earth a green planet.

The dense forests and the mass vegetation at the eternal side of the planet make it looks green.

Water covers though 72% of the earth’s surface, still, Astronauts say that even the entire Amazon rainforest is visible from space. Not only this, but the temperate forest of North America can also be seen from space. These plants and trees give this mesmerizing green look to the earth.

Well, we should be thankful for science and technology as we get to see such high definition pictures of the earth on the internet where you can clearly see how beautiful does this blue-green planet actually looks.

We all know that only the earth sustains life on its surface. No other planet or celestial body can give us this environment to even think of living there.

The green planet gives us the habitat required for survival. In other words, you can say that earth is a green planet because it facilitates a habitable atmosphere.

The suitable conditions for survival and the environment required for sustainable living organisms exist only on earth. The widely spread habitat and different ecosystems that work accordingly are amongst the major miracles happening in the universe.

The earth has already planned its strategies to maintain the natural order. Say, for example – the food chain. Every other organism has its role to play in the maintenance of balance. If anyone of them is removed, all others will be affected, including human beings as well.

Similarly, the earth has its own strategy for the recycling of wastes. The waste of one organism is a treasure for the other. Say, for example – biogas.

They convert agricultural and animal waste into a reliable resource that can be replenished within a short time. In simple terms, it converts the waste into something very useful.

The capability of soil decomposing the waste and the ability to provide fertility to the soil, which gives the plants and crops growth ability, is phenomenal. That further leads to the improvement of the green matter and allows a green eco-friendly environment on earth.

How Much Green Is the Planet Earth?

Earth is a versatile planet with recurring seasons and climatic changes. With such diverse conditions, including the difference between latitudes and longitudes, the answer for the earth’s greenery rate keeps on changing with time. Eventually, the earth seems to be much greener, especially in the rainy season, when blooms arise. While in summer and Autumn, the vegetation shades out and becomes thinner.

Therefore, the greenery rate of the earth at different locations differs at another instance of time. Another reason for the irregularities in the green spot marks is the inclusion of human activities.

Some observe that the number of green spots on the globe is decreasing with a ratio of 0.02% every year because of deforestation. Statistically, it is a smaller value to analyse the change, while practically, it creates a difference for the existence and survival of the organisms on the planet. More the greener planet, the more vegetation and more the chances of healthy survival.

The dark green and light parts of the vegetation remarks from the outer space show the greenery and plant content in that specific area.

Plants are crucial. They supplement the required necessities and are the sole reason to recognize the planet earth to be green.

Researchers have been studying the greener regions and their occurring rates often. Few Green Facts over the globe noticed over several years from the space satellites are as follows:

You can also read: Why Earth is called as unique planet?

Conclusion: So, you can say that habitability, the presence of flora and fauna, and the feature of earth and its people to recycle any matter is the reason because of which the earth is called a green planet.

Benefits of Recycling for the Environment

The Story of Earth and Life