World Refugee Day is a worldwide event to honor the strength, courage, and determination of those people (including men, women, and children) that has to flee their homeland. There may be various reasons like conflict, violence, persecution, etc. that forced these people to escape from their homes.

The day was marked the first time in 2001. Before this, many countries used to hold their own Refugee Days. Among all these, the African Refugee Day was quite popular, which used to get celebrated on 20th June in various countries.

Later on, the United States General Assembly on 4th December 2000 adopted resolution 55/76. As per this resolution, 2001 marked the 50th anniversary of the 1951 Convention related to the Status of Refugees. In support of this resolution, the Organization of African Unity (OAU) also had agreed to hold International Refugee Day associated with African Refugee Day, i.e., on 20th June.

Eventually, it was decided by U.N. General Assembly that 20th June will be celebrated as World Refugee Day every year to raise awareness about the solidarity and protection of the refugees.

We celebrate World Refugee Day on 20th June every year since 2001 with a mindset that “Migration is not a crime.” The day was started by the UNHCR (U.N. High Commissioner for Refugees) as #WithRefugees petition. It was started with a motive to send a message of action, responsibility, and human dignity on behalf of refugees to governments across the globe.

2001 was the commencement of the event celebration in an international platform in coordination with UNHCR. Various activities were organized to celebrate the day in different countries such as Albania, Algeria, Australia, New Zealand, Austria, Bangladesh, Bulgaria, Cana, China, Colombia, etc. and many more.

Next year in 2002, a special tribute was given to the refugee women for their courage and determination. To support and protect refugee women five actions were planned by UNHCR that includes-

In 2003, Coca Cola sponsored the day in the Republic of Moldova. The proceeds of the event were sent to CCR (Charity Centre for Refugees), which is a partner organization of UNHCR.

CCR and UNHCR organized a friendly sports competition on World Refugee Day 2003. This competition was held for Moldovan and refugee children from Russian-Ukrainian school to celebrate the day dedicated to refugee youths.

In 2004, UNHCR arranged an outing on 25th June at a recreational park/beach in Jakarta in cooperation with its partners Yayasan Pulih and Palang Merah from Indonesia.

In 2005, a message was given by U.N. High Commissioner for Refugees Antonio Guterrese addressing the success of UNHCR throughout the years since its beginning.

In 2006, a poster was released by UNHCR, giving 19 million refugees a reason to hope. A hope that they never, ever, have to run again. A belief that they can build a better future here.

2007 was the 7th year of the World Refugee Day celebration. This year East Sudan and Juba/South Sudan celebrated the day with two themes- “A New Beginning” for South Sudan and Blue Nile state and “Diversity-Tolerance-Respect” for the rest of the country.

In East Sudan, the day was celebrated with an environmental activity of planting 90 trees in different refugee camps throughout the region.

On the other hand, in South Sudan, various activities like dancing, music, poetry contest, sports, etc. were held to celebrate the day.

In 2009, towards the celebration of this international event, UNHCR Goodwill Ambassador Angelina Jolie and U.N. High Commissioner for Refugees Antonio Guterres calls upon the people worldwide to recognize millions of victims of the quarrels not as a burden but as a potential gift.

In 2010, UNHCR launched its most ambitious program as the celebration of the day; This was the first time when New York’s Iconic Empire State Building spotlighted in UNHCR blue from sunset on World Refugee Day to show respect and solidarity for refugees.

In 2012, millions of people around the world organized several events and programs to pay tribute to refugees. This World Refugee Day, Angelina Jolie donated US$100,000 for UNHCR’s work for helping Syrian refugees.

In 2013, to observe the day, UNHCR presented a multimedia artwork, sanctuary, and sustenance. It was the story of many journeys by the Chicago-based group ARTWORKS project for Human Rights.

In 2014, a peace run for the refugees in Kenya’s Kakuma Camp was held to mark World Refugee Day this year. Apart from this, many other events were organized as UNHCR reported that the number of refugees was higher than it had ever been observed since the end of World War II.

In 2015, the day took place against the backdrop of worsening the crisis worldwide. UNHCR lead urges higher international action to end conflicts as counts of forcibly displaced people are becoming quite huge.

In 2016, to celebrate the day, UNHCR brought together around 130 key stakeholders from Govt. private sector, trade associations, academia, civil society, and multimedia organizations to discuss perspectives on the problems related to lawful labor schemes for forcibly displaced in Malaysia.

In 2017, various events were organized worldwide in coordination with UNHCR. For example-

The screening of the documentary film “Human Flow” was hosted at the Cultural Center “Cinema Kyiv” on Word Refugee Day 2018. UNHCR held this event, where Chinese contemporary artist and refugee activist Ai Wei Wei made the film quite successful. This movie was filmed in 23 countries and around 40 refugee camps worldwide.

The world joined the celebrations of the day, organizing various events at different places. For example- 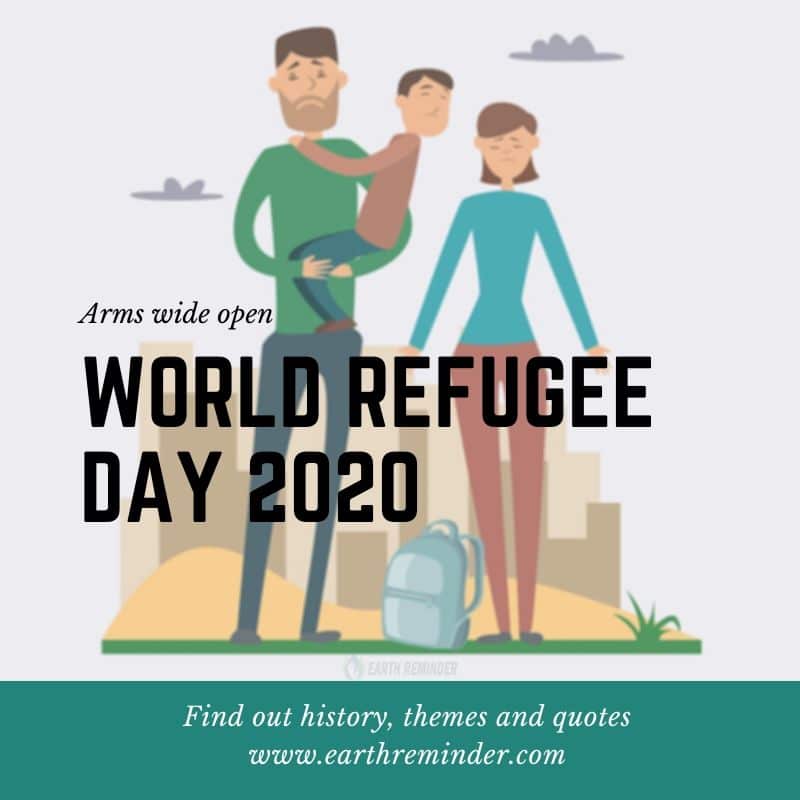 We are just a few days away from World Refugee Day 2020. The event will be celebrated on the same day, i.e., 20th June. As it is an international event hence, many countries will take part in celebrations.

Various communities, individuals, faith groups, and schools, etc. will contribute to making the day successful like previous years. All your steps, whether it’s a big or small step, will be counted in solidarity with refugees.

UNHCR will conduct numerous events and activities in different parts of the planet to go one step forward for the protection of refugees. You can look for any online or offline event in your city to be a part of this international event.

The theme of world refugee day 2020 will focus on raising worldwide awareness of global responsibility for refugees.

The event is celebrated every year with a particular theme to boost the morale support of the refugees worldwide. Every year thousands of people volunteer to reduce the pain of refugees to assure them that they are not alone.

These are some heart-touching quotes that are capable enough to express the feeling of the refugees who had to leave their places forcibly due to war or other kinds of conflicts. You can share these quotes to make people aware of the pain of refugees that they go through every single day.

Recommended Read For You: Earth day 2020 theme, history and events

Refugees are also human beings like us. They are displaced from their houses not because they wish to do so, but due to war conditions. Refugees have feelings, they also feel pain, and they also want to live a fearless life like all of us.

Why don’t we spend some time with them to give assurance that they are safe here? Take the initiative this World Refugee Day 2020 to celebrate various activities and events.

Save Water Essay for Kids and Students