When is World Turtle Day?

World Turtle Day is celebrated on 23rd May every year. The main objective of celebrating world turtle day is to spread awareness about the protection of the natural habitat of turtles & tortoises.

American Tortoise Rescue is a non-profit organization that is dedicated to working for the rehabilitation and rescue of all different species of turtles and tortoises. The organization also works to protect the environment where these reptile species live.

It is an international event celebrated all over the world in different ways. People organize various events and activities to celebrate this day for the preservation of turtles for the upcoming generations. Spreading awareness in schools is also an important activity to make the youth aware of the risks involved with the survival of these species of the reptile family.

If you also care about turtles and want to contribute to protecting these wonderful species, then you can go through this article to collect more information about world turtle day and conservation of these species.

The husband-wife team of American Tortoise Rescue realized in 1990 that some species of the beautiful hard-shelled reptile are very close to extinction. There were many causes of this extinction, such as environmental hazards, cruel hunting of these species, harvesting of their eggs for human profits, etc.

This was the time when they took this issue on serious note and decided to stand for the protection of this water species. The husband-wife team took this issue on the international platform and planned to spread awareness about the conservation of various species of turtles and tortoises across the globe. As a result of their initiative, the emergence of world turtle day happened, and we started celebrating it on 23rd May every year. However, the official announcement of this day occurred in the year 2000.

In 2000, this was the starting of the journey of World Turtle Day. The organization put a lot of effort into educating and encouraging people about the protection of turtles and tortoises along with the loss of their habitat.

In 2002, The American Tortoise Rescue organization announced the world turtle day to be celebrated on 23rd May every year. Since then, we celebrate this event on this particular date annually.

In 2004, world turtle day was celebrated with a lot of passion. Various activities were carried out this year for the protection of turtles. World Turtle Trust funded for Costa Rica Leather-back project for nesting on the beach.

In 2007, the non-profit organization “American Tortoise Rescue” got approval from Ministry for the Environment in French Polynesia to monitor and safeguard a field during the entire nesting season on Tetiaroa.

Since 2007, the organization continued the process of monitoring turtles and also concerned about their protection.

In 2010, the world turtle day was again celebrated as raising awareness about the different species of turtles and tortoises. However, the main attraction this year was the Parthe, smiley sunny turtle and Perth, black and white group shot.

In 2011, the Sydney Aquarium Conservation Fund (SACF) announced the launching of a turtle tagging project in support of world turtle day. The main objective of this project was to spread awareness about the threat to the turtles and their protection.

In 2012, this day was celebrated with more passion and enthusiasm. On 23rd May 2012, 33 new turtles were hospitalized at Wildlife Center along with other non-turtle creatures. The good news was that out of 33, 17 turtles were ready to release after cure.

In 2013, it was a new beginning to the celebration of world turtle day. American Tortoise Rescue organization was getting achievement year by year in its great movement of rescuing turtles. This year Wildlife Center recovered and rehabilitated 5 Eastern Box Turtles. These five turtles returned to their natural wildlife after a long period of recovery.

A dozen turtles remained at the center for further recovery and hospitalization. In 2014, the Wildlife Center was celebrating the “part two of turtle release 2014” sponsored by American Tortoise Rescue. On this year, it was celebrated with a release of a dozen turtles back to their home territories. On this turtle day, the diet of each turtle included a big berry as a treat.

In 2015, the Wildlife Center achieved great results in rescuing turtles sponsored by American Tortoise Rescue. This year, Wildlife Center was taking care of 24 turtles that were admitted in 2014. Out of these 24 turtles, 14 turtles were ready to release in their home territories. As a celebration of world turtle day, these 14 turtles were planned to move to an outdoor enclosure for one week after that they were released to their territories.

In 2016, the Wildlife Center and American Tortoise Rescue organization were facing towards a new successful year for world turtle day. In 2016, the center was taking care of 25 turtles. Many of these turtles were recovered and ready to leave the center within a few weeks.

In 2017, the world turtle day was observed worldwide on 23rd May. The day was celebrated globally to save turtles and tortoises that are rapidly becoming endangered due to loss of habitat and destruction of the ocean ecosystem.

In 2018, people across the world got involved in various projects that include the rescue of turtles and tortoises. The celebrations and protection activities were happening in different parts of the globe in support of world turtle day.

In 2019, this event was celebrated under a tagline “Shellebrate World Turtle Day 2019”. The theme of world turtle day 2019 was “Adopt, Don’t Shop.” There were many activities included in the celebration of World Turtle Day 2019, such as dressing up like a turtle, conducting roadshows promoting the existence of turtles, distributing many lessons & teaching material in various schools for awareness about turtle protection, etc.

The planning for the events and activities were started with a lot of enthusiasm. It was another year to bring attention and increase knowledge about protecting the world’s oldest reptile creature. The theme of world turtle day 2020 was focused on bringing attention and increasing respect and knowledge for tortoises and turtles and, in addition, motivating humans to come and help them survive.

This international event was celebrated worldwide in various ways. People were dressed up green in support of world turtle day. Multiple events were organized. A lot of knowledge was shared about the importance of turtles to the marine ecosystem and for the entire environment. Along with this, different ideas were shared about the conservation of this shell-covered sea creature.

This year, on 23 and 24th May, the entire world “shellebrated” the occasion of our reptile heroes – turtles. And the theme for this year was “Turtles Rock”, which means “turtles are not rocks with legs”.

American Tortoise Rescue (ATR) has celebrated the 21st world turtle day by spreading awareness about one of the oldest creatures in this world through giving respect and sharing knowledge through their site worldturtleday.org.

Also, the UN Biodiversity organization has provided a solid reason to celebrate world turtle day 2021 on social media. Scientists rescued the critically endangered Bellinger River snapping turtles and bred about 35 healthy babies. After the breeding cycle, scientists already sent 20 turtles back to the wild and decided to release the rest when they are ready.

On 24th May, Oceana Canada, through the hashtag #WorldTurtleDay, raised its voice for the ban on single-use of plastics, which causes the sea turtles to ingest them, and several other difficulties.

Further, Ross Park Zoo used the hashtag #EndPlasticPollution to let the world know the harmful impact of plastics on our majestic creatures, mainly living in oceans.

TC Energy has installed a 2.5 km-long tunnel that avoided interrupting any nesting sites and coastal areas for turtles for the protection of biodiversity. This is the biggest celebration for world turtle day from this Mexican organization.

This international turtle day, Morris animal Foundation has shell-ebrated the progress of their 20-years long conservation efforts for this endangered species. They have rescued and hospitalized 11,000+ sea turtles in the U.S.

Besides these, numerous organizations and individuals have also celebrated and raised awareness about protecting and conserving these endangered organisms and their habitats.

On June 9, 2021, Tortoise rescue organization was celebrating World turtle day by raising awareness about how temperature rise has impacted the tortoises in the California desert.

Indi Kindi, another organization working on the welfare of kids, was celebrating world turtle day on June 4, 2021. They have created turtle sculptures and enjoyed grape and kiwifruit turtles while learning about the importance of turtle habitat protection from Li-Anthawirriyarra sea ranges.

Like every year, this year also, the world turtle day will be celebrated on 23rd May, Monday. Some hashtags you can use and follow to participate in this occasion are #Shellebrate, #WorldTurtleDay #TurtleDay.

Further, the tortoise rescue on their World Turtle Day twitter page encouraged everyone to donate for the welfare of these lovely cold-blooded creatures. 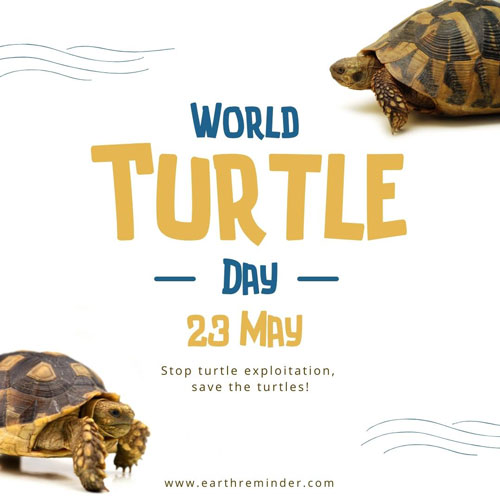 There’s a store namely bonafide for #worldturtleday and it’s open from 6th April. This organization is selling products that are labeled as celebrated along with showing a turtle.

On March 8, World turtle day organization raised awareness about not purchasing a turtle or tortoise. This is because that way these creatures are removed from the wild and the global demand will increase. And more illegal trading could occur.

Besides the dates of celebrations, the American Tortoise Rescue is working every day to find new ideas for raising awareness and influence individuals to participate in conserving our oldest living creature.

How Can We Celebrate World Turtle Day?

Turtles are important creatures of seas and oceans that play a vital role in maintaining the health of flora and the coral reefs of the marine ecosystem. Sea turtles are also helpful in adequately balancing the marine food web.

As we are the one who is polluting the marine ecology through various activities, hence it is our responsibility to take all the preventive measures to protect such a valuable sea creature. Raise more and more awareness about turtle preservation at an individual level and initiate different events to support world turtle day every year on 23rd May.