7 continents and 5 oceans of the world

Earth is the third planet of the solar system. However, it is the only planet that has life. It is a unique planet that has a vast treasure of natural resources. And these resources play an essential role in the survival of life.

The Earth is known as a blue planet and looks like a blue marble from the outer space. The reason is that more than 70% of Earth’s surface is covered with water, and the rest is a terrestrial area, i.e., land.

You must have studied about the 7 continents and 5 oceans in your school time. It is such a fascinating topic that enhances our knowledge about mother Earth. Therefore, in this article, we will know little more about the Earth’s surface, i.e., the land area (the Continents) and the vast water bodies (the Oceans).

Continents Around the World

In general terms, the vast landmasses are termed as the continents. The Earth’s surface comprises of 7 continents- Asia, Africa, Europe, North America, South America, Antarctica, and Australia. Hence, the brief information about these continents is as follows-

The continent is surrounded by the Pacific Ocean, the Indian Ocean, and the Arctic Ocean. It is situated in the Eastern and Northern Hemisphere.  Furthermore, Asia plays an essential role in the world’s economy as it is highly populated and consists of economically powerful countries like India, South Korea, Japan, China, etc.

Africa is known as the second continent of the Earth after Asia in terms of size and population. The total land area covered by the Africa continent is approximately 29,648,481 km2, i.e., 11,447,338 sq. Miles.

The continent’s population is almost 1,338,088,105 as of 6th June 2020, based on the latest estimations of the United Nations. Also, it is estimated that nearly 16.72% of the world’s population lives in the Africa continent.

At present, Africa consists of about 54 independent countries. The Red Sea surrounds the continent to its northeast, the Indian Ocean to its east, the Mediterranean Sea to its north, and the Atlantic Ocean to its West.

Moreover, Africa has diversity in its climatic conditions that vary from warm to tropical or a mixture of both. The climate of Africa makes it a desirable place for various species of the animal kingdom.

Europe is the second smallest continent after Australia. The Atlantic Ocean borders it to its West, the Arctic Ocean to its North and Mediterranean, and the Black Sea to its South. This continent from 7 continents of the world covers almost 22,134,900 Km2 (8,546,329 sq. miles) of the landmass area.

Further, the current population of the European continent is 7,47,606,094 as of 6th June 2020 as per the latest UN data estimates. Europe is a continent that harbours both the smallest (Vatican City) and the largest (Russia) nations on the planet.

Europe is a place where many different European civilizations have been emerged to shape the world with its historical impacts. 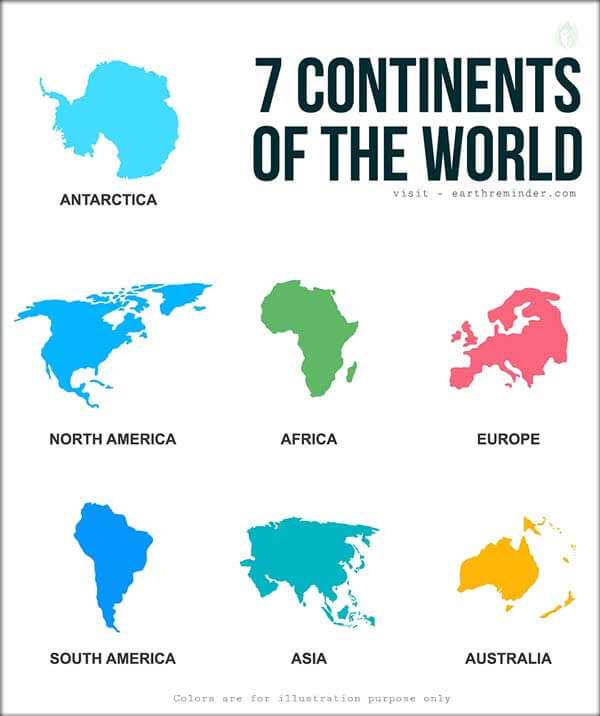 North America consists of 23 different countries. Almost 8% of the world’s population lives in North America. This continent experience a great variety of climate from extreme cold to tropical & sub-tropical.

Besides, talking about the economic status of the continent, North America is the wealthiest continent across the globe. North America has the largest GDP (Gross Domestic Product) per capita as compared to other continents.

South America borders with the Pacific Ocean to its east and the Atlantic Ocean to its West.  This continent from the 7 continents of the world, stretches to the South Pole, where it comes close to the Antarctica continent. South America consists of only 12 independent nations. Brazil is the largest among all these nations.

South America is a home for a wide variety of biodiversity, and the major credit goes to the Amazon River (the longest river in the world).

Antarctica is known as the southernmost continent of the Earth as it is positioned in the South Polar Region. It is the 5th largest continent out of seven continents of the world.

Almost 98% area of Antarctica is covered by thick ice-sheets (approximately 1.6 km thick). It is the coldest continent of the planet with a shallow temperature. Sometimes, the temperature reaches up to -130 degrees Fahrenheit (-90 degrees Celcius).

Moreover, Antarctica has a landmass of 12,949,940 Km2 or 5,405,000 square miles. This continent is sparsely populated as compared to other continents of the Earth. The reason is the harsh climate of the continent. The population of this continent, as of 2015, was estimated up to 4,912 people.

Antarctica is quite poor in terms of economic activities except for fishing and some small-scale tourism activities. As far as the continent’s flora & fauna is concerned, here you will find very low biodiversity.

Australia is situated between the Pacific Ocean to the West and the Indian Ocean to the east. Further, Australia is a home for various plant and animal species. Moreover, it is famous for the biggest reef across the globe, i.e. The Great Barrier Reef.

Oceans Around the World

Oceans are the massive water bodies that provide a home to millions of species. There are 5 oceans of the world- the Pacific Ocean, the Indian Ocean, the Atlantic Ocean, the Southern Ocean, and the Arctic Ocean. So, let’s take a look at the huge water bodies of the planet. 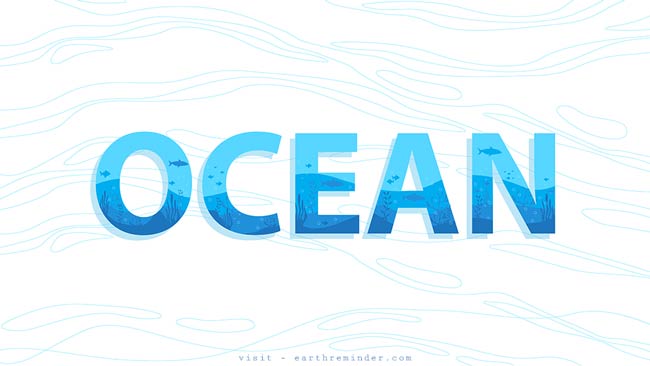 The salinity of the Pacific Ocean varies from latitude to latitude. The salinity near the equator may be as low as 34 parts per thousand. Hence, this is less saline as compared to the mid-latitudes because of profuse equatorial precipitation.

Furthermore, the Pacific Ocean is a home for a wide range of rare marine creatures, nowhere else on the planet. And the typical animal species of the Pacific Ocean include Hammerhead shark, White-sided dolphins, Octopus, Sea turtle, Sea otter, Stellar sea lion, etc.

The Atlantic Ocean from the 5 oceans of the world covers almost 20% of Earth’s surface. It is the second-largest Ocean after the Pacific Ocean. This Ocean covers almost 106,400,000 Km2 or 41,081,270 sq. miles area on the Earth’s surface ranges between Western Europe and Africa to Western North & South America.

Despite the economic importance, the Atlantic Ocean is also suffering a lot from marine pollution. However, many countries are doing their best to protect the Ocean from pollution for our upcoming generations.

Named after India, Indian Ocean stretches between South East Asia, East Africa, and the East of Australia. Hence, this is the warmest Ocean of the planet. Moreover, Researches assume that human-induced greenhouse gases play a significant role in increasing the temperature of the Indian Ocean.

This is the smallest Ocean of the planet. It is also known as the shallowest Ocean found on the Earth’s surface. The Arctic Ocean lies mostly in the Arctic North Polar region in the middle of the Northern Hemisphere. Eurasia and North America almost border it.

Arctic Ocean has an area up to 13,986,000 Km2 or 5,400,015 sq. miles on the Earth’s surface. However, most of the time in a year, ice covers this area. As far as the Arctic Ocean’s salinity is concerned, it depends on the season, which means when the ice melts and freezes.

The area covered by the Southern Ocean is approximately 20,327,000 Km2 or 7,848,299 sq. Miles. The Southern Ocean out of 5 oceans of the world is termed as the youngest Ocean of the planet. Before 2000, this Ocean was considered as a southern extension of the Atlantic, the Pacific, and the Indian Oceans.

Furthermore, the Southern Ocean is known as the 4th most immense Ocean in the world. This ocean is the home to a wide variety of animal species (especially those who rely on phytoplankton for their survival).

Mother Earth has done a lot for us. Hence, we get all the necessary requirements needed for our life- water, air, land, minerals, etc. from nature. Still, we are misusing these resources and spoiling them for our benefits. Thus, we should start behaving like a responsible person and cooperate with “Save Earth and Save Life.”

The 7 continents and 5 oceans of the world gives us the most immense assets for which we are alive. Therefore, we should respect our nature by grasping its value which can sustain us from danger.