Coral reefs are an essential part of our planet’s delicate ecosystems, providing habitat for thousands of species and providing protection from natural disasters. In this article, we will explore why coral reefs are important – both economically and environmentally. Corals are marine invertebrate organisms that belong to the class Anthozoa. Corals look like hard stony substances that live in colonies of identical individual polyps. Coral polyps are small and soft organisms with a solid base of limestone skeletons known as calicles. These skeleton forms the shape of coral reefs.

When a polyp attaches to a rock on the seafloor, it starts dividing into many clones, transforming into a reef. These polyps start connecting with each other, forming their own colony and acting as individual organisms. Coral polyps look very beautiful, having different color combinations, but actually, they are semi-transparent. Corals get their beautiful colors from host algae, known as zooxanthellae.

For nutrition, corals mostly depend on the by-product of the algal photosynthesis process. Sometimes they use their tentacles to grab zooplanktons and even some small fishes.

Most of the sea-bed area is covered with coral, which enhances the beauty of marine life and plays an essential role in marine ecology. Here, you will get to know a little more about the stunning-looking creature of the marine ecosystem.

What Are Coral Reefs?

Coral reefs usually live in clear, tropical oceans. They are formed in sea beds almost 150 feet deep from the surface because they need sunlight to live.

Coral reefs survive in water, having a temperature between 20 and 28 degrees Celsius. That is why coral reefs are often seen along the Eastern shores of the land and where the wave actions are quite high. The waves bring food & oxygen needed for coral reefs to survive. The waves also help to prevent the accumulation of sediments on coral reefs.

Are Corals Animals or Plants?

Coral looks like rocks from its hard appearance, and sometimes it also seems like plants because of its taking roots attached to the seafloor. Despite plant-like features, corals do not make their own food. They depend on zooxanthellae (algae) for their food requirement. In return, corals help the algae remove sediments from its surface and supply organic products for photosynthesis. Well, corals neither rocks nor these are plants. Corals are actually animals. The corals are made up of numerous small animals known as polyps. Each coral polyp is an invertebrate and is sized almost equal to a pinhead. Each polyp contains numerous tentacles. The polyps take calcium carbonate from seawater to construct their hard-skeletal cover to protect their soft inside body.

How do Coral Reefs Form?

At first, a larva forms when an egg meets with a sperm. The coral reefs start forming when the baby coral floats on water to search for a suitable place to attach. These corals grow and transform into any one of these characteristic structures: fringing, barrier, or atoll.

Why Are Coral Reefs Important?

It is often said that coral reefs are the rainforests of the sea. In addition to being one of the world’s most bio-diverse ecosystems, they are also home to a vast variety of marine life. We rely heavily on coral reefs to keep our oceans and planet healthy. Take a look at these reasons why coral reefs are so important in the world. 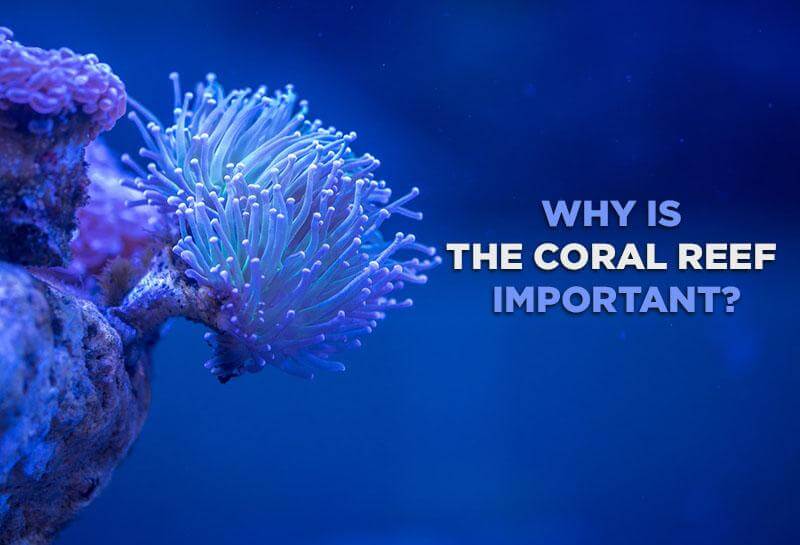 Coral reefs provide food and safe shelter to many species of water kingdoms, such as shrimps, small fishes, and many other predators. From algae to fish, they provide a home for a wide range of species.

Coral reefs play an essential role in slowing down the flow of water waves near coasts. In coastal areas, they serve as a natural barrier, which can reduce the impact of storms and high tides. One of the interesting facts is that corals are more likely to be found in the area where the ocean waves are quite high.

Coral reefs cannot survive in misty and polluted water. When water passes over and through coral reefs, they trap impurities and filter them from the water. This is why they consume particles mixed with ocean water and naturally filter the water. Clean and clear water help to survive coral for long life, and it also helps to make the beaches more attractive.

Many people consume fish and other seafood. Corals give food to millions of humans in the form of fishes and other sea creatures. Many coastal communities eat fish that live on or near coral reefs. Hence corals are vital to fulfilling the seafood requirement of humans.

The coral reef tourism industry contributes greatly to the economy by providing food and jobs for people living nearby. Reefs are one of the most attractions that attract tourists to visit beaches.

Furthermore, coral reefs are a source of employment for fishermen, tour guides, and others in the tourism industry. This is why they take the protection of beaches as a top priority so that more tourists come to visit these beaches every year.

How to Preserve Coral Reefs?

We still have time to save these amazing ecosystems, but we need to act now. To preserve coral reefs, you can do the following: Be A Responsible Tourist

As eco-friendly tourists, we should behave responsibly. In order to prevent accidental damage to coral reefs, we should not enter our boats in coral reef areas.

Since corals are fragile and non-mobile creatures, we should not touch them to cause any harm. Please do not dispose of waste on beaches or in ocean water. This will eventually come into contact with coral reefs, causing damage to their delicate nature.

Improper disposal of waste and garbage is severely affecting the marine ecosystem, including coral reefs. Hence, we must recycle the trash at home and follow the concept of the 3 Rs (recycle, reuse, and reduce). You should stop allowing waste to enter the water stream improperly to prevent water pollution.

Limit The Use of Plastic

The presence of plastic pollution poses a serious threat to marine life. Coral reef animals, like turtles and fish, mistake it for food or get entangled in it. To reduce your impact, avoid single-use plastics whenever possible, and dispose of your plastic waste properly.

Reduce The Use of Fertilizers

The fertilizers contain various nutrients such as nitrogen, phosphorous, etc. When these nutrients are washed into waterways, they ultimately enter oceans. These nutrients change the entire ocean water chemistry, affecting the structures, colors, and fragility of the coral reefs.

The number of vehicles has increased significantly in the past few years (especially cars). The emission from vehicles (greenhouse gases) is causing the acidification of ocean water. As a result, the temperature of ocean water is increasing simultaneously.

The acidic water is causing complications in the growth of coral reefs. The temperature increase of ocean water is also responsible for coral bleaching to greater extents.

Save Energy on A Personal Level

We all know how important it is to save energy. You can also contribute at a personal level by implementing a few changes in your lifestyle. For example, switch to energy-efficient products like LED bulbs, switch off the lights and other electric appliances when not in use, etc.

There is no doubt that over-fishing is one of the biggest threats to coral reefs. You can help protect these delicate ecosystems by eating sustainably caught fish.

Awareness is an effective way to fight against environmental issues. You can educate the people about the damaging effects of pollution, how it affects the marine ecosystem and coral reefs, and how we can handle this environmental problem. You can further participate in coral triangle day and raise awareness.

Based on what we have seen so far, coral reefs are extremely valuable, and their loss has severe consequences. Coral reefs contribute not only to food availability and biodiversity, but also to the livelihoods of people who live near them.

To protect these delicate ecosystems, we must take all the necessary steps now. Just a few decades from now, we could lose this valuable resource if we do not act quickly to protect it. Therefore, preserving coral reefs amazing creatures before they disappear forever is so crucial.

We hope this article has helped you understand the importance of coral reefs in protecting biodiversity. Please share this informative article with your friends and family members.