Coral Triangle is the biggest reef system that covers almost 132,636 km of area in the Western Pacific Ocean. This reef system passes through 6 countries- Indonesia, Malaysia, the Philippines, Papua New Guinea, Timor-Leste, and the Salomon Islands. 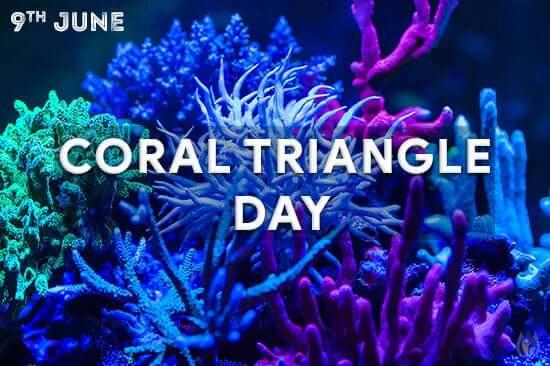 Coral Triangle holds just 1.5% of the total ocean area across the globe, but the world’s 30% of coral reefs contribute to this reef system. This place is known to have the highest coral diversity, approximately 76% of the world’s coral species. This reef system is home to a huge range of coral reef fishes worldwide.

The Emergence of Coral Triangle Day

Coral Triangle Day was established by CTI-CFF (Coral Triangle Initiative on Coral Reefs, Fisheries, and Food Security) to conserve coral reef diversity. CTI-CFF is a multilateral partnership of the six countries across the region, i.e., CT6, that works together to save marine resources, coastal areas, oceanic biodiversity, etc., from the adverse effects of environmental pollution.

The day was celebrated on 9th June 2012 for the first time in conjunction with World Oceans Day. CTI-CFF observed this day to raise awareness about marine conservation, mainly focusing on the coral triangle region.

Recommended Read for You: Causes of Ocean Acidification.

Marine pollution is affecting the biodiversity of oceans, including coral reefs. Coral Triangle, the main empire of the reef system, also has to pay for marine pollution. CT6 countries were observed Coral Triangle Day in 2012 to prevent the reefs of this region.

It was a great initiative taken by CT6 countries to preserve the beautiful treasure of the Western Pacific Ocean. An outlook of the journey of CT Day has been given here in brief.

It was the beginning of the celebration when WWF launched the day with its partners on the 9th of June 2012. The event was celebrated successfully under the overall banner of “Shared Waters, Shared Solutions.”

The main objective of this event was to spotlight ocean conservation to rejuvenate the coral reefs of the Coral Triangle region. Many events were organized in Indonesia by various NGOs, dive operators, individuals, etc., to raise awareness about ocean conservation.

The 2nd CT Day was celebrated with the theme “Saving the Marine Ecosystem through the Marine Coastal Clean-up Program.” More than 30000 people joined the celebrations of CT Day 2013 with a lot of enthusiasm.

More than 60 individual events were organized around the Asia-Pacific ocean region this year.

This year, in the Philippines, the celebration of Coral Triangle Day was planned with celebrity chef Bobby Chinn; This was a sustainable seafood event assisted by the WWF Coral Triangle Program and WWF-Philippines together. Hamilo Coast was the place for this event. It was the 3rd year when Bobby Chinn contributed with WWF to the CT Day celebration since its beginning.

This year the event was planned to go viral with the support of WWF. The CT Day partners organized a social media activity to enhance the profile of the event and the conservation of the Coral Triangle.

This social media activity – “I Heart the Coral Triangle,” was an Instagram completion. The motto of this competition was to encourage individuals to take photographs of natural elements that are arranged in heart shape. Then they can share these photographs on social media such as Instagram, Twitter, and Facebook with the hashtag #iheartcoraltriangle.

The photographs with maximum likes on social media were awarded as the competition’s winner. It was a successful event where many people celebrated 4th CT Day.

The 5th Coral Triangle Day was celebrated under the theme “Save Coral Triangle: Stop Plastic Pollution.” The objective of the theme was to raise awareness about the protection of the marine ecosystem from threats of plastic pollution.

CTI-CFF organized a social media campaign in coordination with WWF named “#noplace4plastic”. This campaign was initiated to create a discussion to minimize plastic pollution waste to protect the coastal and marine ecosystems. A photo competition was also a part of this campaign.

The theme was “Curbing Marine Debris-Reduce Your Plastic Waste!”. NNC Indonesia at Goethe Haus, Jakarta, was the place of celebrations for the event in 2017. The event was held in coordination with CTI-CFF supported by GIZ BMUB Sulu-Sulawesi Seascape Project, WWF Indonesia, RARE, and Change.org.

By 2018, plastic waste was observed as the primary source of marine pollution. It was high time when we needed to reduce the use of plastics, especially single-use plastic. Single-use plastic was majorly getting accumulated not only in Coral Triangle but in the oceans worldwide.

In 2018, WWF and CTI-CFF planned to run a high-profile Instagram contest to deal with single-use plastic waste problems throughout the Coral Triangle region. The Instagram campaign “#PLASTICRESISTANCE” aimed to invite people to join the event to encourage their family & friends to reduce single-use plastic.

As Indonesia is the center of the Coral Triangle region, hence the communities across Indonesia host the celebration of CT Day every year. In 2019, Indonesia celebrated the day on the 19th of June at Kusamaba Beach, Dawan, Klungkung, in East Bali. The event was held in collaboration with Coastal & Marine Resources Mgmt. Center Denpasar.

Also read about one of the major event – World Turtle Day.

A beach clean-up activity was conducted where more than 300 individuals participated from local schools and local govt. & many other groups. These groups collected more than 250 kgs. of trash that mostly came from household and fishing industry sources.

Coral Triangle is known as the Amazon Rainforest of oceans as it is the most influential marine ecology in the world. In 2020, we were going to enter the 9th edition of Coral Triangle Day. CT6 countries will come together with some innovative preventive measures to protect the coral reef systems of the region.

Last year, CTI-CFF conducted various events and activities to promote CT Day 2020. This event focuses not only on conserving the coral triangle region but also grabs the world’s attention toward coral reef protection across the globe.

Coral Triangle Centre (CTC) celebrates World Ocean Day on the 8th of June and World Coral Triangle Day on the 9th of June every year. This year CTC conducted a 2-day online workshop after a five-day training for educators where they shared creative teaching methods on marine conservation.

It was performed from May 22-28 in collaboration with Ludere Nusantara. Besides, they did an online collaborative musical performance on the 11th of June from 7.00 to 8.00 PM (Bali Time) as a live stream on YouTube. Further, CTC conducted a two-day exclusive learning program where participants learned in-depth about coral biology, threats they face, and their restoration methods.

The Conservation and Environment Protection Authority (CEPA) conducted different events to celebrate world coral triangle day 2021. They hosted the coral triangle day event out of the Motupore island, where they cleaned up the beach and planted mangroves.

They also performed coral and seaweed planting with the local community for the occasion. Several other initiatives are working to collaborate on the epicenter of global marine resources through the Coral Sea Initiative. They celebrate this occasion to raise awareness about our marine biodiversity among the population.

They observed this occasion through a webinar called “Driving Blue Recovery for Sustainable Coral Triangle” from 2.00 – 3.00 PM (GMT + 8) on Zoom. Moreover, several organizations through Coral Triangle Initiative tried to support and protect our ocean biodiversity by getting involved in blue recovery activities.

Like every year, this year, world coral triangle day will be celebrated on the 9th of June, followed by the celebration of world ocean day the day before. Last year the theme of the celebration was “Driving blue recovery for a sustainable coral triangle.”

Some common ways to celebrate this event are beach clean-ups, sustainable seafood dinners and beach parties, and exhibitions where the individuals celebrate coral triangle day under the banner.

If you belong to one of the six coral triangle regions, you can still participate by following these hashtags on Twitter: #loveforcorals, #coraltriangle, #coraltriangleday.

On the 28th of June 2021, DENR CALABARZON celebrated world coral triangle day by circulating the urgency to protect the natural biodiversity area of Mabini, Batangas.

Furthermore, Carbonreef.org has spread awareness by stating the increased rate of coral bleach over the last 40 years.

As per Coral Triangle Organization, West Papua, Indonesia, was announced as the first conservation province in the world.

Besides, through their Twitter page, Trader tactics raised awareness about corals by sharing the potential of coral agriculture and the discovery of medicinal functions of corals someday.

Several other organizations are putting constant effort into conserving and restoring one of our largest ecosystems.

How to Celebrate Coral Triangle Day?

Every individual effort will make a difference to protect the most important diversity of the marine ecosystem. You can follow these tips to contribute your valuable efforts to CT Day celebrations.

Every organism is important and plays a role in biodiversity. Similarly, coral reefs are an essential creature of the ocean. When it comes to Coral Triangle, we have a huge responsibility for the protection of this region.

The coral reef system at Coral Triangle acts as the backbone of the world’s total coral reefs. Hence, we need to stop polluting the triangle region to save coral reefs. Understand your responsibility and act accordingly to be an active participant.