World water day is held on 22nd March every year. We celebrate the day to get attention to one of the leading environmental issues, “Scarcity of water.” Water is life, and we cannot even imagine our life without water. Water means a lot to us more than just to quench our thirst, but it plays the role of a vital component of human development; This day provides us an opportunity to think about this issue and how we can make a difference.

In 1992, 22nd March was declared as World Water Day when the UN General Assembly adopted resolution A/RES/47/193 of 22nd December. Since 1993, we observe the day as a world day of water every year to raise awareness about water resources conservation.

World water day 1994 was the beginning of the international event to unite the world together to conserve water. This year the day was celebrated with the theme ‘caring for our water resources is everyone’s business.’

WWD 1995, this was the first time when Lesotho celebrated the day on 22nd March. The WWD theme for this year was ‘Women and Water.’ The Department of Water Affairs Organized two main activities to celebrate the day- on water pollution and environmental degradation.

In 1996, the world celebrated the third WWD global event. The Philippines joined the event this year by organizing various activities by the PWP members (Philippine Water Partnership).

WWD 1998 was the 6th annual celebration of the international event. As per the recommendations of the 17th meet of the ACC Sub-Committee on water resources, UNICEF & UNDESA took the lead in conducting the observance of WWD 1998.

The excessive flood that occurred in significant rivers in the world in 1998 caused thousands of deaths & massive damage in India, China & Bangladesh. This year UNEP was coordinating UN agency to address the world on WWD 1999.

In 2000, the second world water forum and the ministerial conference was held in the Netherlands in the week before WWD on 22nd March 2000. From 17th to 22nd March, many water specialists, politicians, experts, and officials assemble in the conference in the Hague from different parts of the globe.

In 2001, the WHO was coordinating the UN agency for the WWD event. The day’s actual message was to put necessary efforts to provide clean drinking water & improve the health of thousands of people suffering from contaminated drinking water. 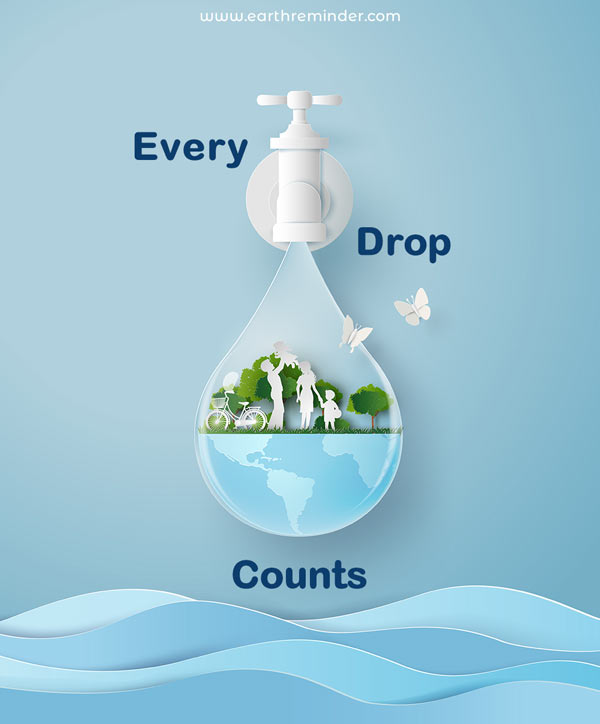 The theme for WWD 2002 was “Water for Development.” The International Atomic Energy Agency was the lead UN agency for WWD 2002. The states with insufficient and deteriorating water resources in different parts of the planet need integrated planning & management for water resources.

In 2004, the events for the day were conducted by the UN International Strategy for Disaster Reduction and the World Meteorological Organization. The core message of WWD this year was – weather, climate & water resources can have harmful impacts on socio-economic development and humans health.

The UN General Assembly at its 58th session in December 2003 agreed to proclaim the years 2005 to 2015 as the International Decade for Action- “Water for Life.” The beginning of this action plan was the world water day of 2005.

The theme for WWD 2006 was “water and culture” under the leadership of UNESCO. The international event this year drew attention to the fact that there are many ways to use, view, and celebrate water as there are several cultural traditions across the globe.

In 2008, the UN took a crucial topic for the WWD celebration “sanitation.” This was a very challenging topic and a big crisis. It was estimated that poor sanitation was affecting more than one in three people on Earth. To spread awareness on sanitation, the ceremonies for the day were held in Geneva, Switzerland.

The main focus of WWD 2009 was placed on trans-boundary waters to build mutual respect, understanding & trust among the countries to promote peaceful and sustainable economic growth. This year, the UNESCO led the event’s activities with the support of UNECE (United Nations Economic Commission for Europe) & FAO (Food Agricultural Organization) of the UN.

In 2010, the highlight of the WWD event was water quality. On 22nd March 2010, UNESCO and WWF-France hold a round table debate at Organization Headquarters on “Water Quality, Quality of Life” as the theme for this year was “clean water for a healthy world.”

WWD 2012 was celebrated around the world with a lot of enthusiasm. Different countries took part in the celebrations this year. For example: In Thailand, the day was celebrated at the UN Conference Centre (UNCC), Bangkok, in coordination with the United Nations ESCAP (Economic and Social Commission for Asia and the Pacific) and FAO (Food and Agricultural Organization). United States Embassy in Thailand also joined the celebrations as a key partner.

The theme for this year’s WWD was water and energy. Water plays a vital role in energy generation. The World Water Council had been exploring the link between these two terms since 2011 through their partnership with EDF.

The official celebration for the event in 2014 took place at UNU Headquarter Building, Tokyo, Japan. UNU and UNIDO co-organized the main events on behalf of Un-Water.

It was a two days event (on 20th and 21st March). On 20th March, the event was “Asia Pacific Regional Symposium: The Water-Energy Nexus in Asia.” On 21st March, it was organized as a full-day event that included expert dialogues, a high-level policy panel, and launched the World Water Development Report 2014.

In 2015, the world water day website went live. It took the visitor on a journey to learn more about water & sustainable development. The visitor went through short informative texts & visual before proposing the ideas on the celebrations of WWD. There was also an event section where the organizations, groups, or individuals could find an event happening in their region.

On the international event of world water day 2016, the day was celebrated at UNESCO-IHE by the students and the staff members posing with statements about what water means to them. In 2016, the official event was held in Geneva at the ILO Headquarters on behalf of UN-Water.

In 2017, ESCWA (Economic & Social Commission for Western Asia) organized a regional event to celebrate WWD in collaboration with UNESCO, the Ministry of Water and Irrigation of Jordan, The Govt. of Sweden, and the ACWUA (Arab Countries Water Utilities Association). The event was held at the Kempinski Hotel in Amman. The event covered many programs, including the regional launch of WWDR (World Water Development Report) 2017. 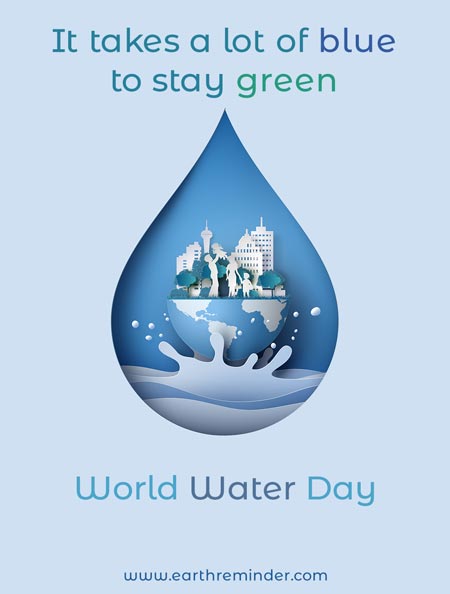 In 2018, the campaign for WWD was called ‘the answer is in nature,’ and the attention was drawn to explore nature-based solutions (NBS) to the water challenges we face in the 21st century. This campaign’s actual focus was that NBS (such as planting trees, restoring wetlands, etc.) is a sustainable and cost-effective way. The NBS was expected to help rebalance the water cycle and minimize climate change impacts to improve environmental health.

As the theme for WWD 2019 was “Leaving no one behind,” which adapts the central promise of the agenda 2030 for sustainable development, which will benefit everyone.

This sustainable development goal was very transparent, where there will be water for all by 2030.

World water day of 2020 was focused on exploring the link between water and climate change. The growing population is the main reason for the depletion of natural resources, including water. We must use water much sensibly that everybody gets the supply of water.

Due to the pandemic situation of COVID-19, many events were canceled this year. The WWD campaign by the UN this year aims to spotlight that how sensible use of natural resources can help to minimize the risks of flood, drought, scarcity, pollution and also to fight against climate change.

The UN campaign of WWD 2020 focused majorly on the importance of hand wash & hygiene as the world faces the COVID-19 outbreak. The campaign’s primary urge to everyone was regular hand wash with soap & water or with an alcohol-based hand sanitizer.

On WWD 2020, IWA (International Water Association) has organized an Online Panel Discussion on the topic to raise awareness of water’s importance.

The World Water Day 2021 was an online event worldwide due to the COVID-19 pandemic. “Valuing Water” was the theme of 2021.

The event’s main focus was to support the achievement of SDG (Sustainable Development Goal) 6: Water & Sanitation for all by 2030.

As world water day 2021 was taking place on social media, a digital campaign aimed to generate conversations to collect opinions and comments from people worldwide about water and its importance in our lives.

Clean International organized the 4th Annual Worldwide Walk for Water from 1st March to 31st March 2021. This worldwide walk was organized with the goal of “clean water for everyone, everywhere”. You can be a part of this walk by registering your team or donating your contributions to sponsor a walker. You can visit “worldwidewalkforwater.com” for more information.

Recommended Read: How Much Water is There on Earth?

The theme of World Water Day 2022 is Groundwater: Making the Invisible Visible. The theme was decided at the 30th annual meeting of UN-Water held in Rome. The meeting was held at the IFAD’s (International Fund for Agricultural Development) headquarter.

Consequently, groundwater is rapidly depleting. The World Water Day 2022 Theme intends to bring attention to groundwater and spread awareness about this invisible yet indispensable water resource.

To raise awareness about freshwater and why its restoration is necessary, the UN Environment Programme (UNEP), in collaboration with the Food and Agriculture Organization of the United Nations (FAO), will organize a webinar on this upcoming world water day 2022. The title of the webinar will be ‘Restoring Freshwater.’

On March 21, 2022, during the opening ceremony of the 9th World Water Forum in Dakar, Senegal, the UN World Water Development Report 2022 will be presented as part of World Water Day 2022.

Following world water day 2022, another major event is in the pipeline for December 22: The UN-Water Summit on Groundwater 2022. The summit aims to propose an action plan based on SDG 6 Global Acceleration Framework and UN World Water Development Report 2022 for the preservation and management of vital natural resources.

All the themes of world water day are given below:

How Can We Celebrate World Water Day?

People celebrate world water day with a lot of passion worldwide, including various events and activities. You can also be a part of the celebration. Here are some ideas to celebrate WWD.

Water is the basic need of our life; We cannot compromise it at any cost. Unfortunately, the water resources are contaminated and misused to the extreme level that we have reached a severe water scarcity level today. We need to focus on the responsible use of water resources to conserve them for the upcoming generations.

Why Are Birds Important to the Environment?