Causes and effects of the Flood:

Flood is the most common type of water-induced natural disaster. It is said to be the primary reason for deaths worldwide. In the 20th century, about 6.8 million people were killed by the devastating effects of floods; still, many people in this world are unaware of its leading causes. Therefore, in this article, we intend to discuss the fundamental aspects of flooding. 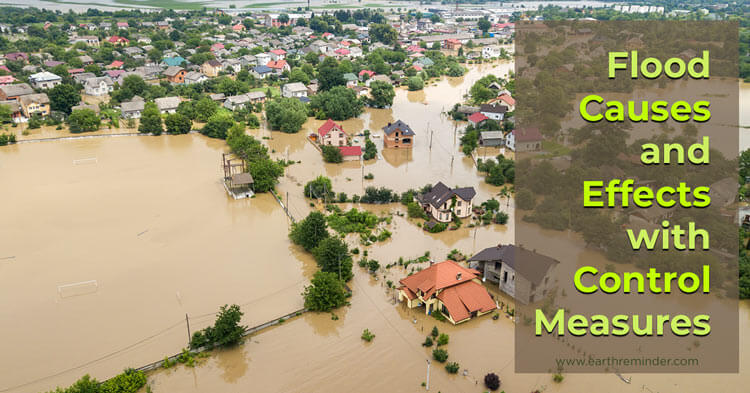 What is the Flood?

When the land becomes submerged within an overflow of water, it is called a flood. There are several official definitions of flood from which the Flood Directive of the EU defines “a flood as a temporary covering by water of land not normally covered by water in the sense of flowing water.”

We can also define flood as the accumulation of too much water at the natural or artificial banks of a water body, causing destruction of lives and properties of people at that place.

According to the center of research on the epidemiology of disaster (CRED), a flood is a significant rise in water level in the lake, stream, reservoir, or coastal region.

Moreover, if we analyze a report published by the World Meteorological Organization (WMO), at the beginning of 2002, about 3000 people were killed, and 17 million people suffered worldwide due to the uncontrollable impacts of flooding.

Further, several estimations report that Asia is the greatest flood-affected continent of about 50% of fatalities concerned in the last quarter of the 20th century.

These reports show the criticality of the flood situation and why studying floods is a must thing. So, now let’s understand several causes and effects of floods in different parts of the world.

Major Causes and Effects of Flood:

There are several reasons and consequences of such types of natural disasters, so before knowing the effects, we should understand different causes of flood-

How are the Floods Caused?

There are various natural as well as anthropological causes of flood. Yet, the most common one is prolonged heavy rain. Now, let’s consider the primary reasons for the overflow of water to the land area for a longer period.

The major cause of floods includes Rainfall. However, Rainfall is not that much impactful if two factors like the intensity of Rainfall and duration of Rainfall, remain under control.

Monsoon is the main time in the year when more than 70% of prolonged heavy Rainfall causes flooding.

The intensity of Rainfall refers to the rate of Precipitation per a particular duration of the period of continuous rain.

Intense Rainfall is one of the major reasons for flooding. Rivers contain low water flow throughout the year. However, heavy or high intensity of rain causes a sudden overflow of water resulting in flood, and there are so many effects of it.

One of the biggest examples of high-intensity precipitation is the flood of the Haora river of July 19, 2015. It was caused by high-intensity Rainfall for a short period and submerged most of the nearby areas.

Four states, including Assam, Kerala, Karnataka, and West Bengal, have mostly impacted around 1,400,000 people and 183 fatalities.

Till August 25, 2020, floods affected more than 17 million people, with 1,082 deaths in states like Assam, Bihar, Gujarat, Chattisgarh, Kerala, Karnataka, Madhya Pradesh, Odisha, Uttar Pradesh, and West Bengal, according to a report from ECHO.

The second major cause of flooding includes the infiltration capacity. How readily the soil can absorb water is referred to as infiltration.

Increased vegetation helps in the process of infiltration by plants and crops. However, deforestation prevents infiltration and grows the runoff to streams.

The rate of water passing is the discharge of a stream. Due to continued Rainfall and highly saturated soil, water runoff to the streams and the amount drastically increased.

The high amount of water in that water body causes high discharge by rising velocity and cross-sectional area. That time the river banks are called flood or full bank stage.

Further, increased discharge leads to a rise in depth, width, and velocity of the stream. This causes overtopping the nearby land and causes a flood.

Hydrograph – a graphical representation of fluctuations in discharge over time – shows the presence of a flood. A steep rise and steep fall within a short duration in a hydrograph represent a more disastrous consequence. Also, the overstep river flow rate raises the chances of flooding.

Also read about another natural disaster: Reasons and Consequences of Earthquake.

The rate of discharge of water is regulated by the shape of the basin after a heavy Precipitation. Thus, in order to predict a flood, it is essential to determine the basin shape.

This calculation is done by elongation and circularity ratio. The diameter of a circle to the length of the basin is known as the elongation ratio of a drainage basin.

Further, the circularity ratio refers to the ratio of the basin area to the area of a circle with the same perimeter as a drainage basin.

The elongation ratio usually ranges from 0.6 to 0.1 and depends on the climatic and geological factors. However, the circularity ratio shows the drainage basin outline and is a dimensionless index.

The slope of a stream is the variation in altitude across a particular horizontal distance.

This progressively reduces with the length of a stream channel. Slope estimates the extent of a river falls in elevation after traveling a distance. The higher the slope or Gradient, the more will be the velocity of water flow.

The measurement of Gradient is done in meters/kilometers or feet/mile. When a stream flows down a mountain slope, we refer to it as a steep Gradient with a narrow channel.

Whereas a stream flowing across a flat plain contains a gentle gradient. A gentle slope can lower the extent of floodwater by preventing the easy passing.

Deforestation is one of the major man-made causes of floods, which has devastating effects on our environment. When the destruction of the forest in the upper catchment of the rivers occurs, flood causes.

As we discussed, the infiltration rate decreases when the number of trees reduced in the flood-prone area. This is because of the decrease rate of absorption of rainwater by the soil. Trees improve the absorptivity of rainwater through their roots into the deep soil and decrease the water flow to the river channels.

Around two-third of rainwater is stored as groundwater through forests. However, increased deforestation causes that amount of water to run down and mix up with the streams.

Again, increased surplus water reduces the fertility of the soil by erosion. That erodes soil further raises the height of the river bed. This results in deceleration of flow capacity during the heavy downpour.

Other anthropogenic causes of floods include increased urbanization. Rising population leads to an increase in urbanization, which ultimately accelerates deforestation and expands build-up areas.

Concrete lands diminish the water absorption capacity of the soil and thus more water runoff to the rivers.

Further, dense culverts and pits make the surplus water travel through the overland or subsurface to reach the water bodies.

Therefore, a high amount of rainwater passes directly to the rivers and streams, causing flood in the nearby regions. This is due to the decreased capacity of soil to hold water and quick runoff.

Several causes and effects of floods impact the vast majority of people. Broadly, we can classify the impacts of flooding into primary, secondary, and tertiary types, which cause social, ecological as well as economic effects. However, the major consequences include the following; 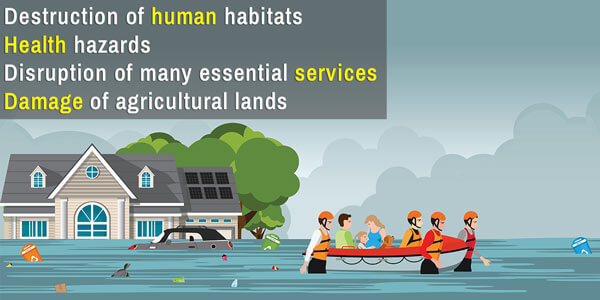 This also leads to a high price of food products in the market. Further, this leads to economic loss. A large amount of soil erosion also takes place due to the intense flow of water.

One of the most tragic impacts of the flood is the damage of habitats. The high velocity of water brings large particles, including rocks. These cause erosion of buildings, bridges, levees, and lead them to collapse.

Flood also carried away automobiles, vehicles, castles, and also humans in their way. Lots of people lose their family members due to such incidents.

High amounts of sediments cause the deposition of thick layers of mud over things and building interiors. Irrigation is further affected by the submerged pump houses.

The deposition of a high amount of toxins or pollutants near human habitats causes the spread of several water-borne diseases.

Further, immersed sewage plants give rise to high amounts of fecal pathogens by the mixture of floodwater with untreated wastewater or sewage.

Moreover, flood water drags pesticides and fuel oils, which are poisonous for animals as well as humans. Large standing water helps in the breeding of several pathogen carriers like mosquitoes.

Disruption of many essential services

Disruption of many essential services comes under the secondary effects of the flood. Flooding results in the destruction of electric poles, water tanks, had stations, telephone lines, and such crucial services and influenced the regular life.

Some areas remain in the dark and without water supply for several months. The damage of roadways also influences the transport system.

Also Read about: Water Treatment Plant and its importance.

About each sector, including the housing sector, livestock sector, agriculture or business sector, water and sanitation sector, health care sector, and also the education sector, become affected due to flooding.

Thus, preventive measures  after a flood, should be taken by the government as soon as possible.

We should take the following measures in order to tackle several causes and effects of floods.

Floods are so dangerous, and thus we should take previous awareness as well as control measures in order to prevent huge socio-economic loss.

Food products, essential services, and transport system destruction are some of the major effects of floods.

We should cooperate with our government to avoid such devastating natural disasters as much as possible.

Here we have described several causes and effects of the flood, which can help us to study further to find more accurate solutions. If you find this article helpful, then follow us for more such informative content. Ask if you have any queries by commenting down below.