Causes and Effects of Thunderstorms:

A thunderstorm caused when warm and moist air rises and swift updraft to colder regions of the atmosphere affecting the zone with its irresistible destruction, is an intense, short-lived weather disturbance. It is a storm associated with the presence of lightning, thunder, formation of dense clouds, heavy rain, and strong gusty winds. Thunderstorms sometimes turn to dangerous storms possessing lightning, powerful winds, hail, and may lead to floods and tornadoes. Now let us move forward to understand what are the causes and effects of thunderstorms. 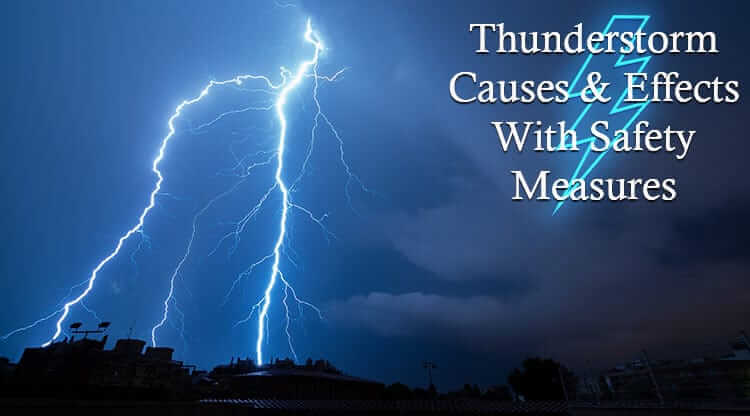 For a thunderstorm to occur, there are 3 underlying conditions which are required for its formation, which includes:

Let us study one by one:

Moisture is the presence of a liquid, generally water, in trace amounts. For a thunderstorm to occur, moisture is considered to be a mandatory condition. It is measured in dew points.

Dew point – It is the amount of moisture in the air or can be defined as the temperature to which the air must be cooled to become saturated with water vapor. Severe thunderstorms are more probably to occur when the surface dew point is 55 F or higher.

Thus, moisture is needed to form clouds and rain.

Instability is a condition in which air will rise freely on its own because of positive buoyancy. This causes air to rise so quickly to form thunderstorms. For example- When we have a plastic ball at the bottom of the swimming pool, and once we suddenly release, it will be accelerated upward immediately.

A similar process occurs when instability is released in the atmosphere. The air in the lower troposphere is lifted until it becomes less dense than the nearby air. The increasing speed depends on the density difference between the air that rises and the surrounding air.

While instability release is like a plastic ball rising from the bottom of a swimming pool, lifting is caused by air being forced to rise. The object will not rise on its own until a force causes it to rise. Thus, Instability cannot be released without the forced lifting.

We learned how each cause is necessary for the formation of a thunderstorm. After talking about the causes of thunderstorms, let us understand how thunderstorm occurs.

All thunderstorms go through three stages of their life cycle which includes:

Let us go through all the stages of its life cycle.

The first stage involved in the formation of a thunderstorm is the cumulus stage or developing stage. Thunderstorms occur in a type of cloud named as a cumulus. During this stage, moisture is lifted upwards into the atmosphere. The moisture carried upward cools into liquid drops of water due to lower temperatures at high altitudes, which appear as cumulus clouds, as explained above.

In the mature stage involved in the formation of a thunderstorm, the warmed air continues to rise until it reaches a region of warmer air and can rise no more.

The air is forced to spread out that develops the characteristic anvil shape of the storm. The water droplets merge together to form larger and heavier droplets, which starts to fall. In this process, the simultaneous presence of both updraft and a downdraft occurs and produces cumulonimbus clouds.

The dissipation stage usually deals with the downdraft process. The downdraft will push down the thunderstorm, hit the ground, and spread out. This phenomenon is known as a down-burst.

The downdraft hitting the ground causes down-bursts and a hazardous condition for aircraft to fly through, resulting in a decrease of airspeed.

Thus, in Nutshell, After the moisture is lifted upward into the atmosphere, it leads to the development of liquid droplets, which merge to form a larger droplet. This brings the process of downdraft resulting in downbursts.

A thunderstorm can be even hazardous if accompanied by lightning, gusty winds, and heavy rain. It can affect humans, animals, public properties, and even nature.

As far, we have studied how do thunderstorms occur and various stages involved during its life cycle. Now let us go through what impact does a thunderstorm creates on our life.

A thunderstorm can have an adverse effect on human beings. Each year, many people are killed or get seriously wounded by severe thunderstorms despite the advance warning given to them. Usually, a thunderstorm produces lightning, which kills more people as compared to tornadoes.

Animals are also affected due to thunderstorms. Heavy rainfall during a thunderstorm makes them feel helpless. Even animals might get injured or killed in a severe thunderstorm because of no shelter/home available for them.

We have learned how thunderstorm creates a terrible impact on living beings. It does have a negative effect on public properties as well. A thunderstorm can destroy the structure of a house, big buildings, towers, and transformers in cities and villages. It sometimes brings economic loss for the region too.

A thunderstorm is usually accompanied by lightning, which struck trees and plants. It sometimes also leads to the fire in the farms and forests, which harms the region’s biodiversity. Hence, it severely affects the beauty of nature too.

Safety Measures During a Thunderstorm: 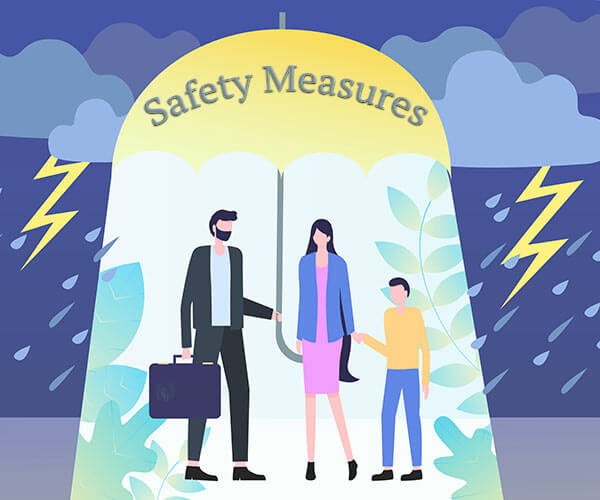 As soon as you hear thunder, alert yourself. Perform all the prior requirements and safety measures, Switch off the lights and gas buttons. Prevents yourself from standing or leaning to the walls of the roof.

There are high chances that lightning during the thunderstorm strikes the tall objects. So, if you are outside or driving, remain inside your car. Don’t take shelter under a tree or tall objects. Also, try to stay away from metallic things as they are conducting in nature and more prone to striking.

It is highly recommended that if you are at home or inside a four roof, you should not let yourself out during a thunderstorm. It is better to be inside rather than risking your life in such a situation. Wait for the storm to stop and then safely go out in case of an emergency.

A thunderstorm is also known for its strong winds, so it is at high risk when you stand along with glass doors or windows. It is better to close all the windows and stay safe inside the four walls.

You must keep yourself updated before any thunderstorm comes to your region. Be sure you prepare yourself before its ill effects.

As it is said,” Prevention is better than cure.” It is better to try to prevent all the risks that can be caused by thunderstorms.

I hope this article has helped you to know much about the thunderstorm with its causes and effects. Do share this article if you loved to read it. For more such articles, visit our website.