What Are the Causes of Light Pollution? 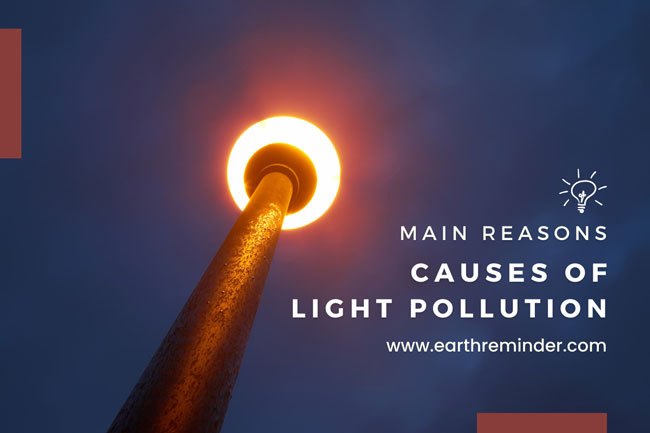 The brightening of the sky at night caused due to various human-made reasons, which disrupt the natural illumination and cycle of the environment, is generally termed light pollution.

As per a recent report, about 83% of the global population survives under a light-polluted sky. With everyone’s cooperation, the causes of light pollution can be controlled to protect the natural inhibits of the environment.

When we talk about the causes of light pollution, we will find that all the reasons are made by us only. For example – the lights in the city at night completely change the atmosphere of any city. The city lights light up the entire atmosphere for the whole night so that you will not feel like it is the night during night hours.

The global dark-sky moment in the 1980s, along with the international dark-sky association, was the time for taking action against the effects of light pollution.

The birds and animals get so disturbed by the unwanted changes in the night illumination that they must compromise to cope with these changes. This is the high time to cooperate with the other living organisms of the environment to make a healthy ecological balance in the ecosystem.

What Are the Main Causes of Light Pollution?

Light pollution is a pollution which is caused by human-made sources. Various reasons are responsible for causing light pollution. Some of them are;

Most people like sleeping in an entirely dark room at night to sleep peacefully. How disturbing it will be if some light intrudes your room from outside. This kind of light pollution in a residential area is mainly sourced from outdoor lights, spillover, neighbor’s houses, glare lights, etc.

Further, as per a study published in the Journal of Clinical Sleep Medicine, there is a profound link between light pollution from residential lights and drug intake for better sleep. People with such sleep disturbances are more prone to sleeplessness and start medication than those who sleep without the interruption by the outdoor lights.

The outdoor lights, overhead, garden lights, etc., undoubtedly give an elegant appearance to the outdoor area. It also plays a vital role in terms of security, but it causes a lot of disturbance at night. This type of residential lighting may cause nuisance inside the house, people while driving, brightening of sky, disturbing the natural illuminations of the environment.

The lights on highways and streets remain lit for the whole night every day. Just imagine the powerful lights lightening on hundreds of kilometers of roadways daily for almost 10-12 hours; how much light pollution does it cause? Not only the roadway lights but the lights of vehicles running on the roads also give its contribute to the causes of light pollution.

The vehicles’ lights and streetlights of roads together make it a massive problem for the environment that affects the entire surrounding with light pollution. According to the studies, the lighting on roadways and vehicles alone contributes to almost 35-50% of the whole light pollution.

The Dense Population Is Also Responsible

Overpopulation is a big problem not only as one of the main causes of light pollution but in terms of other environmental issues as well, such as air pollution, global warming, greenhouse effect, water pollution, etc. The world population is increasing daily, and simultaneously the number of businesses, residences, etc., is increasing equally. All these coming together leads to light pollution in the surroundings.

The huge floodlights used in sports grounds are one of the main causes of light pollution. The lights used at sports stadiums at night are quite powerful in that they give a day-like feeling during night hours. These big lights are capable of disturbing the environment at night by reflecting the glare from these lights upward, due to which the sky appears much brighter. These lights are specially used for big sports events, but they affect the environment badly.

Reckless Use of Lights

We often use colorful and bright lights on special occasions like Christmas, Diwali, Eid, etc., which look very beautiful. We decorate our houses, temples, shops, etc., with lights on these special occasions, but when we leave these lights on all night, This causes light pollution. We should turn off the lights after celebrations.

It is also an example of wasting energy (Also Read- energy Saving tips). We all need to practice together to minimize light pollution and save energy so that we can save some for the upcoming generations.

Other light pollution causes include shopping malls, gaming centers, night clubs, restaurants, etc. They use pretty attractive lights to grab the attention of the customers. These display lights disrupt the surrounding area by scattering a lot of nuisances in the environment.

Public places like airports, railway stations, bus stands, etc., are provided with a large and robust lighting system that generates too much light to the sky, interrupting natural illumination. These public places are lit with strong lights all the time, whether day or night, because they provide 24 hours services to their customers. These lights are not even covered with glare effects, hence spreading strong direct lights to the environment and becoming one of the main causes of light pollution.

We are not saying live in the dark and avoid lights; the main focus of “earth reminder” is to raise awareness and make people switch off the lights whenever possible to save energy and maintain ecological balance.