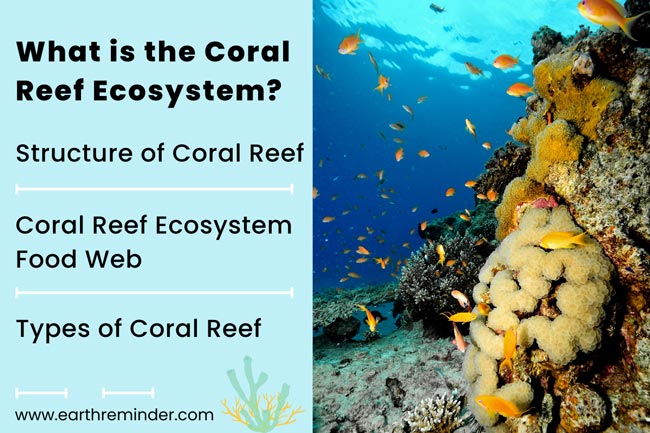 Coral reef ecosystems are dense populations of organisms that are often known as the “rainforest of the sea.” And these aren’t trees. These are made up of tiny animals called coral polyps.

Besides the identified 2,000 species of corals, several other organisms live together to make the reef a dense oceanic ecosystem. It’s also a habitat for 4,000 species of fish and over 1 million species of other animals such as sponges, algae, plants, etc.

However, some human interventions are causing massive damage to this beautiful ecosystem. Thus, knowing about them—before they will ultimately vanish—is quite urgent for this generation.

In this article, we will describe the coral reef ecosystem comprehensively. And you are going to feel thrilled to go for a sea dive to experience them. Let’s delve right in!

What is the Coral Reef Ecosystem?

Before learning about the coral reef ecosystem, we need to understand what coral is.

Corals are a colony of tubular-shaped animals called coral polyps with a central mouth surrounded by tentacles.

Some people are confused if corals are colorful rocks or plants inside the water. However, they are animals and can’t produce their food independently.

We will dive a bit deeper into their biology,

Also Read: Coral Triangle Day: History and How We can Celebrate it.

What Do Corals Eat for Growing?

In exchange, these algae get a protective shelter inside the hard covering of corals. This symbiotic relationship is termed mutualism. About 90% of the food, they collect is through these protists.

Instead, they collect their food from the dead sediments. The organisms near the shore, when dead and decay, travel down to the bottom. As that organic material is food for some other creatures inside the ocean, only 10% of food particles cross the light-filled (euphotic) region. From that 10%, only 1% reach the bottom. And from that amount, one-tenth part is buried down the earth.

You can imagine how scarce food conditions the deep-sea corals face to thrive.

What Are Coral Reefs?

Coral reefs are the skeleton-like frameworks that create the habitat for most sea creatures. To understand coral reefs deeply, let’s understand their structure and formation.

Coral polyps are the living structures that create calcareous frameworks for their protection. A reef is a non-living structure that acts as the anchor for these tiny invertebrates.

Moreover, these polyps capture calcium from the seawater and secrete calcium carbonate (limestone) to create the skeletal structure – the reef.

Over millions of years of deposition over the dead structures, these become massive that we admire to see in real life.

Thus, corals are the biotic component that creates the reefs – the corallite skeletons composed of white limestone.

Stony corals primarily take part in building coral reefs. However, some other shareholders include hydrocoralline and alcyonarian.

According to NOAA, the corals inside a coral reef ecosystem grow very slowly, ranging from 0.5 to 2 cm per year. Yet, the growth depends on favorable conditions like salinity, temperature, sunlight, and wave action. At an appropriate circumstance, it’s shown to grow up to 4.5 cm per year.

How Do Coral Reefs Get Their Color?

Now you might be wondering, what gives corals such beautiful bright colors if the reefs are white?

Well, the dead corals are all white. However, the presence of photosynthetic algae (primarily green and brown) – which contains chloroplast/chlorophyll – inside the tissues of corals provides color to the structures.

Also, the tentacles of some corals acquire color by the synthesis of several pigments (proteins) inside the body. As some of these are fluorescent, the reflected color differs from the absorbed color of light.

Coral reefs are ecosystems that are the most lively ecosystem on the earth. We can estimate its expansion to be 0.1% of the entire ocean ecosystem. However, they provide habitat to about one-quarter of organisms.

When corals, along with other sea organisms, start living as a mass, creating an ecosystem, it’s known as the coral reef ecosystem.

Coral reefs, through their exoskeleton, protect these organisms and, in exchange, extract food from the photosynthetic algae living in their tissues.

Also Read: Why are Coral Reefs Important and Its Preservation.

There is competition between all the organisms within the coral reef ecosystem for shelter and food. So, some creatures kill others to gain nutrition and become the primary consumer of the food chain.

A food web forms by combining all the interconnected food chains in an ecosystem. And just as in other ecosystems, there are producers, consumers, and decomposers within the coral reef ecosystem.

The primary producers (or the plants) in a coral reef ecosystem are blue-green algae or cyanobacteria, brown algae, phytoplankton, seagrass, and zooxanthellae. These autotrophs produce food through the photosynthesis process.

Then the primary consumers or herbivores consume that food to thrive, which are again consumed by the carnivores and omnivores. The process repeats until the top-level consumers.

The major primary consumers of the coral reef ecosystem include corals, zooplankton, queen conch, sponges, and Atlantic blue tang. These predators become prey when some intermediate or secondary consumers are present.

And the final organism or the top predator inside the coral reef food web is the blacktip reef shark.

After the organism’s demise, the decomposers like microorganisms and some of these organisms simplify the complex biological matters and make it available for the autotrophs for food production.

Queen conch and polychaete worm are the primary detritivores or decomposers of this ecosystem.

The first type of reef is a fringing reef. These coral reefs are mainly present near the seashore around a volcanic island or a part of a continent. These are the reefs that are most prone to damage due to the activities of local people. Fringing reefs start growing from the landmass (continental land or island). Further, these reefs grow in a shallow water channel with a width of mostly 50 to 100 meters.

Fringing reefs are widely spread all around the world. Some examples of such coral reef ecosystems are San Blas, Panama, Cayman Islands of Caribbean; Sabah, Malaysia of southeast Asia; Ningaloo Reef, Australia and North Madagascar of Indian Ocean; New Caledonia in indo-pacific; and Mangia, cook the island of Pacific.

The Ningaloo Reef of Australia near the Indian Ocean is the largest fringing reef in the world. Barrier reefs are coral reef ecosystems that remain a few miles away from the seashore. These are likely to fringing reefs except their distance from the landmass.

An 8-16 Km wide water body (20-100 meter deep) remains between the land and the barrier reef. This is known as a lagoon.

The Great Barrier reef along the north-eastern coast of Australia is the most significant barrier reef and the world’s largest reef ecosystem. 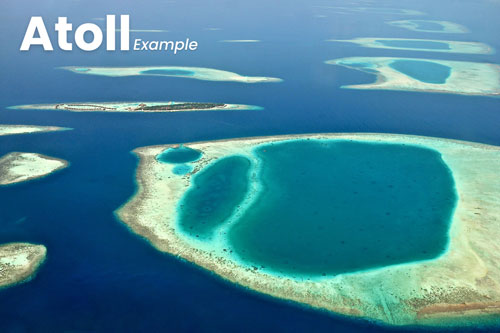 An atoll surrounds a lagoon in a horse-shoe or ring-like structure. There is no island in between the lagoon and coral reef. Therefore, atolls are also known as Lagoon Island or coral islands.

Underwater volcanoes – seamounts – are the origin of the development of atolls.

There are a large number of atolls residing in the Lakshadweep Islands. Besides, the atoll of Bikini in the pacific is well-known for the atomic and hydrogen bomb experiments.

Some more examples of atolls are the Fuji and Funafuti Island in the Ellice, and the Tubataha reefs of the Philippines.

Also Read: 7 Continents and 5 Oceans of the World.

Some patch-like frameworks are formed sometimes between fringing reefs, barrier reefs, or even atolls that originate from the island platform, often known as patch reefs.

You can visualize some amazing patch reefs in the Great Barrier Reef or South Cuba, New Caledonia, Belize, San Blas, and Palau.

Benefits Of the Coral Reef Ecosystem

Some of the natural benefits of the coral reef ecosystem are; About 25% of total marine diversity depends on coral reefs for spawning, nursery, feeding, and hiding.

Some natural phenomena such as cyclones, typhoons, and hurricanes can’t affect this diverse ecosystem only because of the protective shield of reefs.

It is important to note that coral reefs have an economic significance.

The local communities near the coastal regions depend on seafood for living. And coral reefs serve as the root to yield about an average of 15 tons per square kilometer of seafood, including fish, annually.

Further, approx. 4.3 billion people all around the earth depend on fish for 15% of the significant source of protein. Thus, when the coral reefs die out of any threats, it becomes a food crisis for the local communities.

Coral reefs are an attraction for tourists, and thus, it becomes an opportunity for the locals to earn a living. As per a recent estimation, coral reefs have an economic value of around 2.7 trillion USD per year.

Also, the corals near the coastline protect the coastal area from erosion by regulating the wave activities during storms.

This is why coral reefs are extensively crucial for the underwater ecosystem and us. We can differentiate the threats to the coral reef ecosystem into local threats (the loss caused by the local communities) and Global threats. However, if we will categorize these based on climatic factors, the types are;

Some deterioration to coral reefs occurs naturally through storms, pathogens, and predators.

Some physical damages caused by the locals include;

Marine pollution is another primary reason for the destruction of coral reefs. Pollution contain pollutants like sediments, nitrogen, and phosphorus nutrients, pathogens that cause fecal contamination, toxic chemicals, and trash materials.

Besides, Over fishing, coral harvesting, and coral mining are some other factors that act as threats to our valuable biological resources.

A huge anthropogenic threat to the coral reef ecosystem is climate change that, along with some other factors, takes part in ocean acidification. This increase in temperature and changes in salinity creates unfavorable conditions for corals. As a result, corals remove their algae and eventually start to die. This event is known as coral bleaching.

We are at the peak of the 21st century, where climate-related issues are at their optimum level. In the context of threats to the coral reef ecosystem, we have studied climate change as a primary factor for coral bleaching that ultimately leads to their death.

Therefore, some leading organizations are performing their best possible efforts to save this precious and extended biodiversity.

Some of the efforts by noaa.gov include,

EPA is also performing its best to work seriously towards protecting these vulnerable living assets. However, it’s not just the duty of our government or any such associations to protect the coral reef ecosystem. It’s our responsibility, too. We can also take part in the conservative efforts by taking minimal steps to reduce the detrimental effects.