Harmful Effects of Noise Pollution on Human Health and Animals: The high-pitched sounds caused by human beings not only threaten the environment but also causes various health issues to animals, birds, and humans. 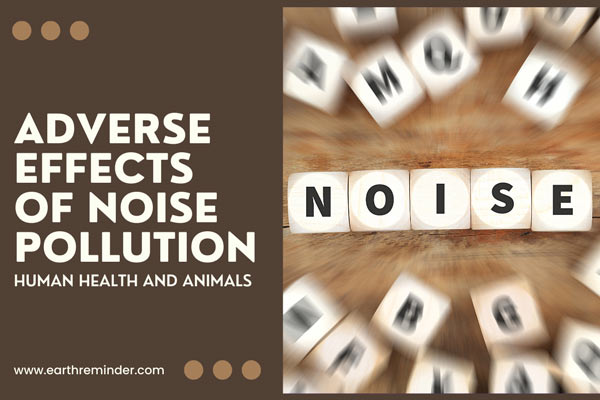 Development, urbanization, and industrialization undoubtedly bring comfort to our daily lives in many ways. Still, it also inflates the level of noise pollution in the environment. The most common source of noise pollution is the sound generated by vehicles.

Apart from vehicular sound, there are many other sources of noise pollution such as aircraft, industrial machines, traffic, large events, construction sites, etc. Noise pollution has many adverse effects on humans and animals.

We will go through this article to learn much more about the noise pollution ill effects and its consequences.

What Are the Effects of Noise Pollution on Human Health? 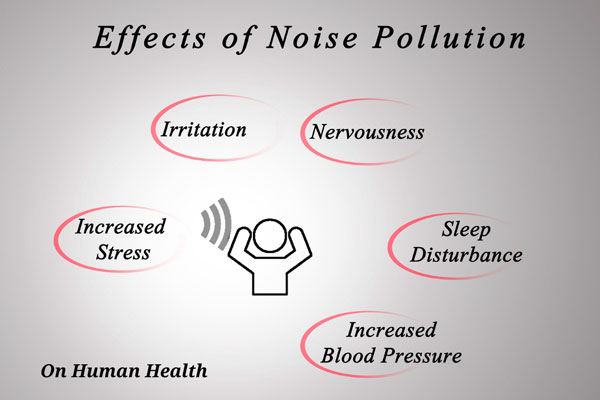 Over the past few decades, cardiovascular diseases have become quite a common health issue in people worldwide. There are many reasons for cardiovascular health issues, and noise pollution is one of the major reasons. According to the studies, highly intensified noise can cause various problems related to the heart, such as an increase in the heartbeat, high blood pressure, etc. In some cases, the heart problem can also increase the stress level in an individual. In contrast, in some severe cases, it may cause death also.

Our ear has a specific hearing range that protects the ear from damage. When the sounds become too loud and cross this specified range, it can cause damage to our eardrums, and as a result, we can use loss hearing power. Noise pollution caused by various modes such as horns, vehicles, airplanes, machinery, etc., minimizes the sensitivity to sounds. When our ear takes these high-intensity sounds unconsciously, it causes instant damage to the ear and body.

According to a study by a psychologist, Arline Bronzaft, based in New York, noise pollution has a considerable impact on children’s learning abilities. As per her studies, children who study in a noisy classroom lag a year behind the children who have a healthy environment.

Further, based on a study conducted in the Cognitive and developmental psychology laboratory, University of Kaiserslautern, Germany, noise pollution impacts children more than adults. It impacts both the auditory tasks, including speech perception and listening comprehension, and non-auditory tasks like reading, writing, and short-term memory.

Most people are facing the problem of sleeping disorders these days. Noise pollution is one of the reasons for a sleeping disorder which may lead to irritation in behavior & uncomfortable feeling in the future. We all know that proper sleep at night is very important for good health and wealth. Unfortunately, a sleeping disorder reduces the level of consciousness and enthusiasm & increases the level of fatigue which in turn affects our performance in office work. As a result, we do not concentrate & maintain balance in our professional & personal life.

Also Read: What are the Major Environmental Problems?

What Are the Effects of Noise Pollution on Animals? Animals use their specific voice to attract and locate their partners. Not only animals but birds also send a signal to their mates through low-pitched volumes. Some of these volumes are very low-pitched and cannot be heard by human ears. This extremely low-pitched voice can only be audible to birds. Still, due to excessive noise through various sources, these species fail to hear those sounds; This leads to the extinction of these species of animals and birds due to the failure of the breeding process.

Noise pollution also affects the productivity of animals. For example – cows produce less milk comparatively if there is excessive noise around while milking process. They feel discomfort and withdraw from producing milk. If we take the example of chickens, they are also affected by noise pollution, and the production of eggs has reduced drastically.

Water animals such as Dolphins, Whales, etc., regularly visit the shallow waters in the ocean but get affected by the loud noise of mining underwater. The excessive noise of drill machines is causing hearing problems in these animals.

Noise pollution is affecting the feeding patterns of animals. The animals such as bats, dolphins, whales, etc., use their hearing power for movements and protection from animals hunting for prey. Noise pollution is affecting the hearing power of animals quite severely. As a result, these animals are migrating to another habitat for comfortable feeding. Sometimes these animals migrate to another ecosystem that is entirely different from their natural habitat. As a result, they die due to an unsuitable environment.

Further, according to a report, noise pollution adversely impacts the southern resident orcas. There is less availability of food. The noise from different human activities like the noise during the turning of an engine and the noise from the large shipping vessels has immediate effects on distraction from hunting for prey; This causes the scientists to take immediate measures, including tracking and monitoring changes.

Adaptation is another effect of noise pollution. The animals migrate to other habitats to survive peacefully. Still, when they fail to adapt to the new habitats, they die. Animals find it quite challenging to survive near urban areas, whether it’s an animal or bird.

In the case of water animals, the bigger animals can survive noise pollution compared to small animals. The small animals get annoyed with the movement of ships and submarines in their habitats which eventually leads to the death of these innocent small animals.

For better functionalities, there is a need for a peaceful environment. However, the increasing population and the advancement of gadgets are complex. From workers working from home during the COVID-19 pandemics to the children studying in a noisy classroom, the impacts extend to humans. But it is not limited there; there are critical issues we can see with noise pollution on the environment.

Taking the seriousness into consideration, different organizations and the government of different regions are taking strict measures that are essential to make our life simpler and mandatory for reducing the health effects of noise pollution.

If you want to add on any more concerns, please reply in the comment box. As human beings, we have to come together to fight the adverse effects of noise pollution. Also, share our article to raise awareness among people.

Major Types of Soil in India And Their Characteristics

Difference Between Ecosystem and Biosphere