Environmental degradation is just like an umbrella concept as it includes a variety of issues like pollution, biodiversity loss, deforestation, land disturbance, and a lot more. It is a problem through which the natural environment deteriorates and depletes biological diversity and reduces the general health of the environment, which can be natural, or human-made. Environmental degradation is harming our ecosystem. It is a distinct unit including both living and non-living elements that lives within it. Plants, animals, and we humans depend on the environment for survival directly or indirectly.

Through the food chain and food web process, we can broadly understand our ecosystem. These living and non-living things depend upon the other environmental components like ponds, streams, lakes, etc.

So, a minor change in the environment can affect the whole system. Our environment has deteriorated for the last two centuries. Somehow, human disturbance is the primary cause of this. The ‘want’ from nature turns into ‘greed,’ which causes our mother nature to deplete and destroy.

Degradation of the environment is one of the essential subjects where our mother earth is dying because of its hazardous, irresponsible, unthinkable, and permanent cause in this present era. Mindless consumerism and the hunger for more economic development or growth started its dreadful effect on mother nature. In the present case, sustainable development becomes a meaningless word.

It happens in several ways, such as the extinction of species, pollution of common assets, deforestation, and most rapidly by population growth. Other causes include urbanization, increase in energy consumption, economic growth, and agriculture intensification.

Therefore, we should understand the causes of environmental degradation to cancel its harmful effects on our nature. This results from the excessive use of nature. Soil quality is essential for microorganisms and all plants, but due to human interference, its quality is declining. Poor farming practices, excessive usage of fertilizers and pesticides are the leading cause of this degradation.

Water is a crucial natural component for both animals and plants. So, we need to keep it pure and pollution-free. The discharge of fertilizers, industrial waste, and some compounds’ biological activity are some of the deadly causes of water degradation.

We need atmospheric gases for our survival. However, pollution or degradation of the atmosphere pushes the world into a dark future. The increasing number of automobiles, industries, and other electrical for mechanical components are the leading causes of atmosphere degradation. One of which includes the increased rate of greenhouse gases which results in global warming and ozone depletion like problems.

Besides the above types, there are several other pollutants that are the critical cause of environmental degradation. The rise in radioactive wastes leads to nuclear contamination, nuclear pollution, Light pollution, and further noise pollution. Other elements like deforestation are also occurring for a degrading environment.

What Are the Causes of Environmental Degradation?

Both natural calamities and human interventions are the reasons for environmental degradation.

Ecological degradation is mainly caused by human activities. However, the fact is that the environment also continually changes over time naturally. Constant Alteration is also a massive challenge for adaptation.

Things like landslides, earthquakes, tsunamis, hurricanes are the reasons for the Unstable ecosystem. These things either come under physical destruction like natural disasters or by the long-term degradation process.

Natural disasters such as hurricanes, typhoons, and cyclones can cause significant damage to different parts of the environment.

The environment is degrading, mostly because of anthropologic reasons, rather than natural disasters.

There are many causes for which the environment is deteriorating by human activities, like land disturbance, deforestation, landfill, urbanization, industrialization, increased energy use, population growth, mining, etc. Therefore, we need to be concern about our activities that lead to an unstable ecosystem.

We can define land disturbance as the human-made physical change of the land, leading to soil erosion, loss of topsoil, and increased sedimentation caused by vegetation. Such activities are not limited to clearing or removing vegetation striping, but also excavating, filling, and storing materials, e.g., mining.

Some plant species have a spreading characteristic like mustard and garlic; once they are planted in a suitable environment, they start spreading, which is not ideal for ecosystem balance.

Trees are the storage house for CO2, as required in the process of photosynthesis for food preparation. Thus, these autotrophs capture atmospheric CO2 and provide us with oxygen without which we cannot survive for a minute. Thus, deforestation includes the major causes of environmental degradation.

Forest is the only source of an enormous amount of oxygen. Deforestation is the cutting down of trees to fulfill a human need. The rapid growth of industrialization, population, and urbanization are the leading cause of deforestation.

Apart from this, animal gazing and making infrastructure can also be the causes of deforestation. By taking the Amazon forest as an example, we can see that in every second one-half an acre of forest land would be free from trees for fulfilling humans’ greed.

Almost 40% of the forest loss happens in the tropical region than in the temperate zone.

After the 19th century of the industrial revolution, the need for land and infrastructure rapidly increased. This leads to deforestation, water pollution, air pollution, soil pollution, etc. Hence, it is one of the main causes of environmental degradation.

What Are the Effects of Environmental Degradation?

There are many impacts of environmental degradation, and they are hazardous for both living organisms and the environment. These are such as;

Biodiversity is the principal balance of the ecosystem in combating pollution, restoring nutrients, protecting wear sources, and stabilizing climate. Now the world is facing a speed-up rate of species extinction, primarily for human interference.

Human activities like deforestation, which is the leading cause of habitat loss for many organisms, indiscriminate agriculture practice, also be a reason for land fragmentation, and overexploitation caused the extinction of thousands of species.

For example, a significant report from the millennium ecosystem assessment, released in March 2005, highlighted inevitable loss in the variety of life on our planet.

Another report said that deforestation in the Nile Delta and Amazon, responsible for the extinction of over 1000 rare amphibians, reptiles by declining ocean diversity and forest diversity.

Now there are many more laws present to decrease the increased rate of biodiversity loss such as:

Human health issues also belong to one of the primary effects of environmental degradation. Health is an essential factor for everyone. Specialists say that good health can only build in a pleasant environment. So, a slight change in the environment might be a cause of irreparable health damage.

So, nowadays environmental degradation causes many diseases through the air, water, soil, and mutation.

There are many diseases seen because of the increase in environmental degradation. It also causes diseases like asthma, lung disease, lung cancer, diarrhoea, a psychological disorder, etc.

According to WHO, in 2014, India’s most polluted city is Delhi, and air pollution is responsible for 10,000 to 30,000 annual deaths. There are 36,000 crore people are dying every year in India because of water-borne diseases.

Climate change can also be a significant cause of health problems. For example, in recent times, the burning of forests in Australia caused a noticeable environmental degradation and was also responsible for many more human and animal diseases in Australia.

Ozone is a membrane present in the stratosphere of the atmosphere, which prevents UV radiation from entering the earth. Moreover, the increased rate of environmental degradation is caused by ozone depletion. A hole in the ozone layer due to increased greenhouse gases makes the UV light quickly enter the earth.

The anthropogenic activities lead to the increment of greenhouse gases like CO2, CFC, CH4, NO2, and other ozone-depleting substances (ODS).

Ozone plays a crucial role in absorbing 97-99% of incoming UV-B radiation. The consumption of ODS quality is high in China, which means it has a sizeable depleting potential.

Because of the degradation of the environment, the ozone-depleting potential of CFC and HCFCs increases, which may be a significant cause for breaking the sustainable development rule.

We should manage, use, and reallocate our resources wisely and carefully. That means resources need to be sustainably used. 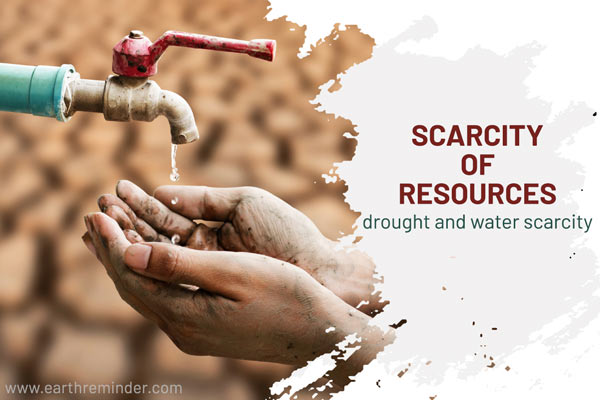 Environmental degradation leads to scarcity of our critical resources like water, fertile land, pure air, medicinal plants, genetic resources, etc. It also leaves a footprint by causing natural calamity as both are reciprocal to each other.

For example, in India, some states found lessening of natural assets (because of earthing cables) like water and food. Therefore, the insufficiency of resources is one of the significant consequences of environmental degradation.

The environment and ecological features are beautiful enough to attract tourists towards it. Natural disasters, the greenhouse effect, deforestation, and increased endangered species are the causes of loss of tourism and affect the economy to a large extent.

The pollution on the beach and the gradual accumulation of wastes also causes distractions.   A report said that the tourism sector loses 50% of its income from tourists. Many people are also losing their livelihood for this.

Another major effect of environmental degradation is natural calamities or disasters. For industrialization, various natural disasters such as floods, droughts, desertification, cyclones, earthquakes, etc. are increasing day by day.

For example: In Afghanistan, the degradation of the environment has already been rampant. The environmental issues that are so common in Afghanistan are soil sanitization, irrigation, soil erosion, landslide, deforestation, loss of biodiversity, desertification, etc.

In the Nile delta, the form of degradation is also the same which treasures the loss of their ecology, food chain dynamics, etc. The oil spill in New Zealand’s worst environmental disaster since October 11, 2011, is another considerable example of it.

Working with others too to preserve the environmental commons seems to promote awareness of interdependence.

Famous social ecologist G.P. Marsh says, “whether a man is of nature or above her,” it suggests we should keep in mind that if we nourish our mother earth, she will sustain us too.