In this article, we will give one example of an air pollution essay to give you an idea of how you should formulate the essay on the topic of air pollution. This essay is written keeping in mind the understanding level of kids from age 6 to 13. So, if you are looking for the best air pollution essay for kids, then you can go ahead and take it as an example to help yourself in the process of writing an essay.

Air is among the vital and important environmental components that all living organisms need for their survival. But it is good to take only fresh and healthy air. There should be a proper balance of all the constituents in the air as contaminated air can be very harmful to health.

Air pollution is one of the most severe problems that maximum parts of the world are dealing with. Day by day the graph of air pollution is increasing. The ever-increasing industrialization, advancement, vehicles, and population are some of the primary reasons behind this serious air pollution problem in the world.

Half of the cities of the world have bad air quality. Big cities with maximum industries and populations are more affected by air pollution. According to a survey conducted by WHO (World Health Organization), cities like Kanpur, Gaya, Delhi in India, Bamenda (Cameroon), Riyadh (Saudi Arabia), etc., are in the top list of most air-polluted cities in the world.

India has the maximum number of cities with bad air quality, and day by day, the number is increasing. The bad quality of air is dangerous to human health and for all other living beings. It is a serious matter of concern as it can be hazardous to this planet.

Firstly, let’s understand what exactly air pollution is, and further, we will move to the causes and effects. Check this video for learning about facts and figures.

What is Air Pollution?

When harmful chemicals, gases, and other substances are discharged into the air from various sources, they cause air pollution. When the level of pollutants increases in the air, it results in the poor quality of air.

Air pollution can be defined as the imbalance in the quality of air by the introduction of some harmful materials, toxic gases, particulates, molecules, and other pollutants from various sources.

Air pollution can be explained simply as the “contamination of air by some harmful substances.”

Air pollution is caused when the number of harmful substances and particulates increases in the air. Air pollution can be caused by both natural reasons and due to human activities. Some of them are as follows- 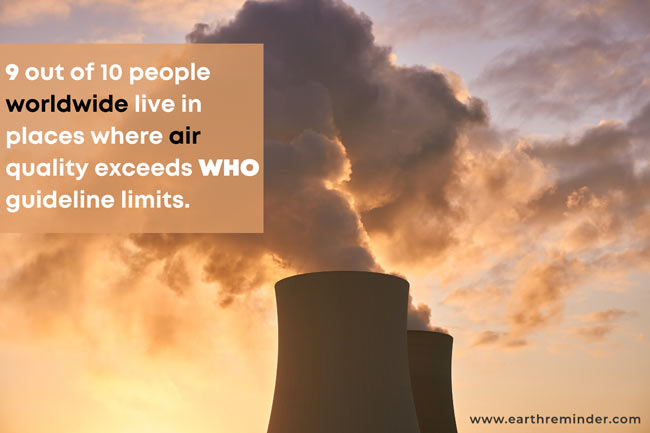 Air pollutants can be divided into two types-

Air pollution has both short-term and long-term effects. Some of the harmful effects of air pollution are-

This shows that air pollution has an equal effect on man, animals, materials, and the environment.

How to Prevent and Control Air Pollution?

There are several ways to prevent air pollution-

A single step towards the prevention of air pollution by an individual is enough to bring a change. If we want to improve the quality of the air, we need to start at our houses.

This is an alarming situation and every human being needs to take action to stop and prevent this world from air pollution. Take the idea from the above essay on the topic of air pollution.

If you have your own points to add to the air pollution essay for kids then you can tell us in the comment below and our team will review them. Also, don’t forget to like our Facebook page where we share an update of the latest article and new earth reminding stuff.