In the smooth running of our world, the contributions which animals make are enormous. Animals play a significant role in the stability of the environment, ecosystem, and our lives. They are excellent companions—especially the tiny mammals. The importance of animals cannot be stressed enough. Without them, our existence is not possible. Importance of Animals in Environment and Ecosystem

The cycle of predating and becoming the prey is what keeps the ecosystem in order. Carnivores, such as hyenas and wolves, prey on herbivores, such as goats.

The herbivores feed on grass and plants. In turn, these animals produce carbon dioxide, which the plants use for their growth and production of oxygen.

When these animals die, their bodies decompose into the soil (by microorganisms) and provide nutrients for the plants. In this way, the animals keep the cycle stable.

Bees collect nectar from flowers, and during this process, they also collect the sticky pollen grains on the flowers. When they sit on another flower to collect some more nectar, the pollen grains detach and collect on the flower. In this way, pollination takes place, and new plants grow. They then produce the essential gas, the source of all life—oxygen.

When this equilibrium is disturbed, usually by human interference, things begin to spiral downwards.

If the predators are killed, the number of herbivores will increase rapidly. This will decrease the amount of plant life and grass in that region, and naturally, the herbivores will come out of their habitat.

Animals like elephants (herbivores) can destroy one whole season’s worth of crops if disturbed in such a manner. That’s why it is essential that animals must not be harmed. Animals are a vital part of the ecosystem.

Another environmental importance of animals is that they take care of other animals. A good example is an elephant.

Elephants use their trunks—which have almost 40,000 muscles—to dig up watering holes. A watering hole is a geological depression in which water collects. Staying hydrated is essential in all animals, and hence having a water supply is crucial for them.

Importance of Animals to Human Lives: 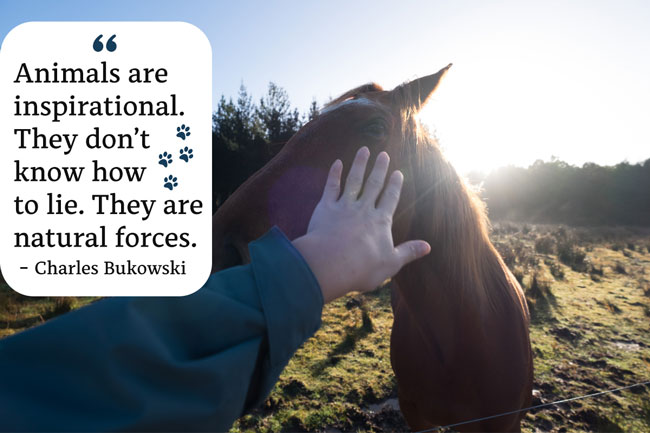 Role of Animals for Wellness:

One of the most common uses of an animal is keeping them as pets. The animals we adopt as pets range from fish to birds to insects and even large mammals such as monkeys. The most popular pets are cats and dogs, and naturally, they have been anthropomorphized the most of all mammals.

Further, the human-Animal interaction has several positive effects on the health of both.

Importance of Animals in Our Physical Health:

Based on a study conducted by several researchers, people with pets have low heart rate and blood pressure levels while under stress compared to those having no pets. In this study, two groups of people, having pets and non-pet owners, were subjected to stressful situations. Then their cardiovascular reactivity was observed. And the results show that having a pet can significantly reduce the chances of cardiovascular diseases and helps in faster recovery.

Further, according to health.harvard.edu, having a dog as a companion can reduce cholesterol and triglyceride levels and lower the stress level on individuals.

There is also evidence that keeping pets can significantly help children and the elderly with anxiety and mental health problems.

Animals For Recovery and Rehabilitation:

Domesticated animals can be the best caregiver and help in the quick recovery from a severe illness. They can help us in speech therapy, occupational therapy, and further physical rehabilitation.

Furthermore, animals help prisoners to live a life without conflict outside the prison. Trained animals can be the best caregiver to individuals with some disabilities.

For example, dogs and monkeys can assist their blind or limbless owners in doing their regular tasks. Cats can also signal their deaf partners for specific sounds.

Animals As Our Companion:

Some studies suggest that human-animal companions help the person to release stress and become more relaxed. Having a pet also has a tremendous social impact on human life.

Friendship and other social relationships have both positive and negative effects; however, keeping an animal as a companion only works towards the positive ones.

People with pets feel less lonely and find an excellent partner to spend time with. Dogs are great for the improvement of physical health too. This is because you can play or take a walk with them.

Furthermore, some findings show that having pets as a companion can improve your social interactions.

In the elderly, having a pet provides emotional and social support too. A study reveals that pet owners have better physical and psychological well-being than people with no pets.

They get compassion from the pets at old age and become better at doing their regular activities such as bending, kneeling, climbing stairs, walking, dressing up, preparing food, and taking medicines.

Children with no siblings might feel shy and less socially active. And several studies show that having pets can help kids develop empathy and emotions plus increase interaction with others. Therefore, animals are essential in human life for both physical and mental well-being.

Role of Animals in Several Works:

From ancient times, animals have been helping us to perform several laborious works. When there were no vehicles, horse and bull carts were the only way to travel from one place to another.

In the deserts, we still use camels for the movement from one side to another. Although nowadays, we are utilizing technology more often, still some rural people use bulls for ploughing the fields.

Importance of Animals in Safety and Security:

Dogs are hugely used in police departments for substance detection and tracking. The police industry also uses horses for patrolling and clearing roads. They are accommodating in events like football and rugby matches for controlling the crowd.

Dolphins named as military dolphins help the officers for the rescue of lost swimmers and for finding mines deep inside the water.

In some places, cats help victims to relax in critical situations. Birds like eagles and pigeons are also trained to perform a special kind of activity for police forces.

Besides, dogs are also kept in houses to keep away the thieves and protect the house from anonymous activities.

Role of Animals in Food Security:

According to a conservation project, our global population will increase up to 32% by 2050 and 53% by 2100. So, maintaining food security and providing food to such a large population is very challenging. And that’s the reason why animal foods such as milk, eggs, meat, and seafood products have a significant demand to fulfill hunger.

Besides, animal products are high in nutritional quality (such animals are called “livestock”). These are a great source of highly balanced bioavailable proteins and several micronutrients, including zinc, iron, vitamin A and B-12. Thus, the consumption of animal-derived foods is a vital source of nutrition in our diet. Lack of such nutrients causes anemia, poor growth, and rickets in young children.

Apart from mammals, fish such as herring, cod, and tuna are captured in large numbers—or grown in fisheries.

They form an excellent diet, and for most people, fish is the primary source of protein. In certain parts of the world, other marine species such as octopuses and squids are also consumed. Therefore, animals have great importance in our food patterns.

Besides high-quality and demanding food, farm animals have specific roles in agricultural sustainability.

For example, manure is an essential by-product for agriculture that increases soil fertility for good quality crop production. Besides, this is an essential source of energy in different power plants.

Animal Importance in Science and Medicine:

Animals have been used for treating illnesses since ancient times, but only from 1798 did they become the ideal test subjects.

Eradication of polio happened because of the vaccines produced by animal cells grown via in vitro fertilization.

The vaccine for measles was developed similarly. Of all animals, mice and rats are the ones used most extensively as experimental models.

They’re used especially for genetics, and few are genetically modified just for experimentation. We call such a mouse a “knockout mouse.”

When a new medicine is in the works, animals like chicken and fruit flies are used to test them. They are used again and again until the medicine is deemed safe for human use.

Even snakes are essential in the medical field; their venom has anticoagulant properties (it prevents the formation of clots). The venom is used to treat patients with cardiovascular, pulmonary, and any disease related to blood.

The drug for treating cancer comes from a particular marine animal called Ecteinascidia turbinata. A deadly toxin produced by the snail Conus geographus is used for pain relief.

Animal Importance in Economic Use:

Even ancient humans, the hunter-gatherers, used animal skin for making lashings. Skin from cattle, pigs, and a few exotic species helps us manufacture handbags, shoes, and other items.

The big cats, tigers, leopards, cheetahs, lions, panthers and cougars, are essential for their skin to make rugs and carpets.

They are also used to make coats and are known to be the warmest form of clothing of all-but at the same time, expensive.

Certain dyes are also prepared from insect bodies. Aristotle mentioned in his writings that sea snails were used to manufacture the color purple for the clothing of royalty!

Apart from dyes, sheep and goats are sheared off their fleece to make wool. An interesting fact about sheep is that if its fleece is left to accumulate, it will eventually die because of its tremendous weight. Therefore, sheep have great importance in making our woolen clothing.

Role of Animals for Fun and Entertainment:

Cats and dogs are often cast in films and show to gain more viewership. All countries have at least one indigenous animal, and tourists flock worldwide to see them, attracting more money.

Safaris are yet another example where animals live in harmony and peace and at the same time provide income for owners.

Some animals are used explicitly for sports and leisure. Polo, rodeos, and horse racing are the names of a few popular sports where horses are our best companions.

Dogs, cocks, calves, bulls, steers are also used in some kinds of sports such as racing, fighting, or hunting. However, some of such activities are already banned due to the psychological impact on our lovable partners.

Animals play such a critical role in our lives; without them, we’ll no longer be able to have this Earth. Human beings came into existence just recently as per the anthropological timeline. Animals existed for millions of years before that.

The importance of animals can be understood by the simple fact that they are the ones who have sustained our planet. Our lives exist because of animals. Animals outnumber us today, too, and we are safe as long as it remains this way. So, let’s love our animals and return their contribution to us by taking care of them!

How Do Organic Farming Practices Relate to Soil Health?