Ocean energy is the energy we get from the Ocean or Marine water by utilizing various technologies. Mostly the tides, waves, or currents of the ocean are used to develop ocean energy. The electricity we get from the sea is entirely renewable, and therefore, we can use them as much as we want.

However, marine energy is under research and development, and it will probably take lots of time to be accessible in daily life.

Therefore, in this article, we’ll draw a comprehensive image of ocean energy, its different types, how they work, and its advantages and disadvantages. So, let’s have a closer view.

Why Should We Use Ocean for Energy?

Before knowing ocean energy, first, we have to understand our oceans. As we already studied, our earth is covered with 71% water, and from this percentage, about 97% is the ocean and approx. 3% is fresh water, which we are utilizing for various purposes every day.

Again, from the 3% of sweet water, only 1.2% is surface freshwater, 30.1% is groundwater, and the rest are glaciers and ice caps. And further, the surface water is divided.

You can easily estimate how little our usable water is, which is why there is a chance of its scarcity. As most of our electricity is generated from hydropower, there is a big chance of drought after it’ll finish.

That is the motive of searching for an alternative to hydropower. Now you must be cleared why we should use oceans as our freshwater power alternative. We have an infinite source of marine water, which can be utilized for our electricity requirements.

Ocean has waves, tides, and currents; you might already know it. So, we can generate energy in two broad ways: mechanical energy, i.e., from tides and waves, and thermal energy– sea solar energy. Now, let’s talk about each of them.

There are three main types of ocean energy technologies: tidal energy, wave energy and ocean thermal energy. All are explained in detail below:

As its name, tidal energy comes from the tides of oceans. Tides are the rising and falling or simple mobility of water along the coast.

There are various concepts regarding tides and so for tidal energy; This is an excellent source of ocean energy and not harming the environment as well. So, lots of projects are going on for generating tidal energy. We have discussed it in detail here. 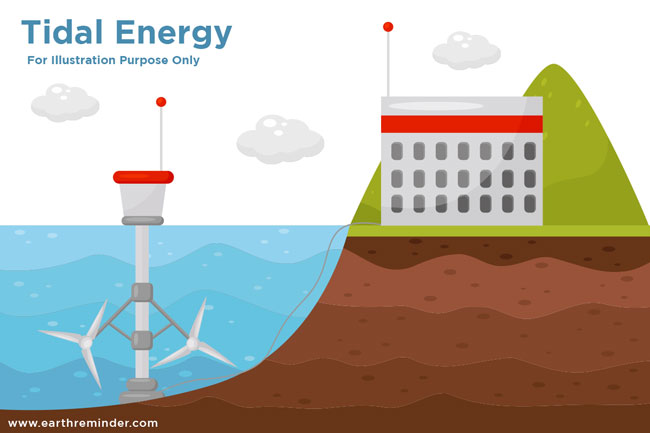 The energy captured from the ocean waves for generating electricity, water desalination, and other purposes is known as wave energy. Waves are the result of wind moving over the water surface. Such a type of power is beneficial in coastal regions.

The pioneer of ocean wave energy is the Japanese naval commander Yoshio Masuda.

How Does Wave Energy Work?

Ocean wave energy converters are the technology used to trap the mechanical energy of the wave to convert it to electrical power. There are several wave energy components such as;

For each of the above technologies, there is a different mechanism of using three primary converters;

In the Oscillating water column, air turbines are used with the PTO system. There are two basic types of oscillating water columns: fixed and floating like Mighty Whale, Superboy, and Oceanlinx. Fixed columns can be placed as isolated, e.g., Pico, LIMPET, in the breakwater, e.g., Mutriku, Sakata, or Nearshore.

Furthermore, these types of conversion devices store the captured air pocket above a water column through a semi-submerged chamber. By the up and down movement of ocean waves, the chamber becomes an engine that forces the air inward and outward.

Such consistent movement creates a high-voltage air of the reverse stream, which then passes through rotor blades. These rotor blades are connected to a generator, which then produces electricity.

Oscillating bodies use hydraulic motors, hydraulic turbines, or electrical generators as a power take-off system. There are three basic types of oscillating bodies, such as fixed at shoreline, e.g., Eco wave power; floating; or submerged.

Some terminators utilize reflecting arms, which overflow the peak and are controlled in the reservoir. Using the low head hydraulic turbines, the potential energy formed by the height of accumulated water over the wave surface is converted into electrical power.

Some examples of such devices are wave cat of Spain, wave dragon of Denmark, and sea wave slot cone generator of Norway.

There are many challenges to adapt wave energy: Waves are varying in different areas that lead to the development of several technologies. Limited supply chain can be a challenge. Lack of industrial structure in many parts of the world.

Ocean thermal energy is the energy produced by the thermal gradient between the warm surface water of the ocean by the sun and the cold deep ocean water.

There is a different temperature variance between the surface and deep water in various tropical areas. Several variations monitored between the shallow water and 1000-meter-deep water are less than 18ºC, 18º to 20ºC, 20º to 22ºC, 22º to 24ºC, and more than 24ºC.

These energy plants can be developed on the shore or offshore, either fixed in the ocean floor, floating or on a ship. For transferring the electricity from the sea to the land, a submerged cable is required. It was first proposed by French Physicist Jacques Arsene d’ Arsonval.

How Does Ocean Thermal Energy Work?

There are mostly three significant types of ocean thermal energy conversions or systems, such as:

Open cycle OTEC is otherwise known as the Claude cycle (discovered by Claude). Here vaporized seawater is utilized as working fluid. Its name is open cycle as it does in a single direction, rather than as a loop.

In open cycle converters, the ocean’s hot surface water is moved into the vacuum chamber, where a flash evaporator operates.

Then this vapor moves towards the condenser and undergoes a condensation process by the cold deep-sea water by either direct-contact or indirect-contact (surface condenser) condensers and discharged to the sea environment.

However, surface condensers produce more commercially usable freshwater products. One of the biggest disadvantages of the open system is its utilization of low system volume pressure, which forces bulky components to adjust the excessive volumetric flow rates of steam.

The closed cycle ocean thermal energy converters operate in a loop continuously to produce a significant amount of electricity. It uses ammonia or freon as a working fluid. Similar to an open cycle, the warm surface water passes into a heat exchanger and vaporizes the working liquid.

After that, the vapor enters into a turbine connected with the generator to produce electricity.

From the turbogenerator, then the vapor moved to a condenser which operates by the deep-sea cold water. The recondensation of marine water gives a signal of completion of the process.

There are various designs of closed-cycle ocean thermal energy converters, and the most convenient one is a shell-and-tube configuration.

As its name, hybrid cycle technology uses both the open cycle and closed-cycle systems to operate and generate energy as well as desalinated water.

The hybrid cycle uses the working fluids of the closed cycle system. In the next step, the steam passes into the ammonia vaporizer, connected to a generator, and converts the thermal energy into electrical energy.

Then the vapor is condensed by the cold water to form desalinated water, which is suitable for human use.

Ocean energy can be a great source of clean energy for our future generation. Although Lots of techniques are developed to successfully generate electricity and some other products from ocean energy, there is still more to research and design for removing the challenges regarding the production of a better alternative to hydropower.

Here we covered everything regarding ocean energy, main types of it and how does ocean energy work. For any further queries, comment down below.

Think critically: What can eliminate the barriers to generating ocean energy?

Importance of Environmental Management and Protection

What Are the Types of Natural Resources?