World Elephant Day: They are pleasant, they are intelligent, and they are loved by people worldwide. Yes, these are the largest land animals “the elephants”. Unfortunately, these majestic creatures have to face several threats to their survival.

The ivory trade is one of the significant risks associated with these magnificent creatures. However, some other issues like loss of habitat, human-elephant conflict, mistreatment in captivity, etc. also show the plight of elephants. World elephant day (WED) was started to draw people’s attention to protecting the elephants. Therefore, this international day provides us with an opportunity to raise awareness about the danger these animals are facing and what can be the solution to overcome this situation.

World Elephant Day came into existence in 2011 by the initiative of two Canadian filmmakers Patricia Sims & Michael Clark of Canazwest Pictures and also Sivaporn Dardarananda (the Secretary-General of Thailand’s Elephant Reintroduction Foundation). So, for the first time on 12th August 2012, we celebrated this day.

The inaugural celebration of WED got great support from film star and Star Trek legend William Shatner. He narrated the documentary “Return to the Forest“. It was a 30-minute documentary about the reintroduction of captive Asian elephants to the wild. Therefore, since 2012, We dedicated the 12th of August to the elephants.

For bringing people together to help elephants, the WED organization celebrated this day for the second time in 2013. This day the people worldwide remind the world’s elephants are in danger.

The” iWorry campaign” of the David Sheldrick Wildlife Trust organized an International March for Elephants on 4th October 2013.

Forest is the home of land animals. Check importance and ways to conserve forest here.

In 2014, people across the world planned various activities to support the campaign to save the threatened African and Asian elephants. Estimations show that illegal wildlife trades killed almost 100 African elephants every day.

According to the June 2014 report of CITES (Convention on International Trade in Endangered Species), if poaching continues at this rate, then almost 20% of African elephants may be slaughtered in the next ten years.

We all dedicated a day to the mighty land animal of the earth by celebrating the 4th annual world elephant day. In the past years, the international campaign has reached millions of people worldwide; This campaign has connected many countries, organizations, groups, and individuals to a single goal of the conservation of elephants worldwide.

Recommended Read: World Giraffe day History and how to celebrate it.

WED 2016 was focused on Asian Elephants as the IUCN (International Union for Conservation of Nature) had listed them as “endangered”. At the turn of the country, the estimation shows according to an educational website Bagheera (dedicated to saving endangered species) was approximately 200,000 Asian elephants. In contrast, in that year, probably 35,000 to 40,000 elephants were left in the wild.

According to a report prepared for the 17th Conference of the Parties (CoP17) of CITES, in 2016, the mean estimate of PIKE (Proportion of Illegally Killed Elephant) dropped almost 5% for the first time since 2009.

The price of raw ivory in China also dropped by more than 50% between 2014 and 2015, as per the survey by STE (Save The Elephants) researchers Esmod Martin and Lucy Vigne.

As far as people are concerned about the worldwide events, they arranged numerous events in 2016 to celebrate the day such as an educational event in the L.A.Zoo, a seminar to mark the day at Resources Himalaya Foundation, Nayabato, Lalitpur, Nepal, etc.

Also read about world tiger day as they are also in endangered category.

This year, it was the 6th international elephant day. Several regions of the world observed this day by organizing various events. So, the Wildlife Conservation Society hosted a visit to the Nasdaq MarketSite in Time Square in celebration of the WED event.

Amarula, the best-selling South African liqueur launched an awareness campaign “Don’t Let Them Disappear” in Canada to save African Elephants. Also, they started this campaign in partnership with a well-known conservation group “WildlifeDirect”.

A life-sized ice sculpture of an African elephant was placed in the summer heat of Toronto to mark the rapid loss of the population of this species.

World Wildlife Fund also took part in the event with the theme Be Elephant Ethical (BEE). It was the time to reevaluate our accomplishments achieved so far in protecting the substantial land mammals. Thus, they organized many more events to celebrate the day with great enthusiasm.

Also check: world turtle day history, celebration, and how to save them.

In 2018, different countries of the world organized various events. Some of the activities for the day were-

In 2019, the WED organization invited all the individuals and organizations to submit their events for the day. They offered many activities to celebrate the international day on 12th August 2019. For example –

Also Read: What Are the Classification of Animals?

We have celebrated world elephant day 2020. People from different countries have united together to celebrate a day of the year on 12th August 2020. Unfortunately, last year the world was going through the COVID-19 outbreak. Still, we had not let down the enthusiasm level of the day dedicated to one of the friendly land animals of the earth.

Here are the highlights of the event:

Moreover, people participated in the celebration through social media to raise awareness about the conservation of elephants worldwide. You can find out about an event or activity in your nearby locations (if any) and can take part in that. Don’t forget to keep your social distance and stay safe.

One more time, we are ready to celebrate World Elephant Day 2021 on Thursday, 12th August 2021. You can be a part of the event by donating or educating people about the importance of the conservation of elephants.

The preparations for World Elephant Day 2021 celebrations have started. If you have any event plan to execute for the celebration of this international event, you can send an email to [email protected] related to the event information.

For the past few years, the protest to retire Lucy from Edmonton Valley Zoo to a suitable environment has been a top subject. Lucy is an Asian elephant who was moved from Sri Lanka to the Edmonton Valley Zoo in 1975 when she was not even a year old. Now she’s almost 46 years old but still fighting for her life in that zoo. It’s almost 15 years, and still, Lucy’s well-wishers are fighting to shift her to a better environment for her wellness. But due to underlying medical conditions, veterinarians don’t recommend shifting because it’s a big risk for her health.

This year, LEAP announced a protest on the 15th of August and asked the world to join the event to announce something important about Lucy’s freedom on the occasion of world elephant day. The hashtags they used in this context are #TimeToLetHerGo, #RetireLucy, and #TheWorldIsWatching.

To celebrate world elephant day 2021, wildlife SOS has announced launching a campaign, namely “Toegrey.” It’s meant to challenge elephant lovers all around the world to take part in raising awareness for elephants suffering from chronic foot problems. Through the official site toegrey.org, Wildlife SOS has asked to join this event by painting the feet’ nails with grey color and sharing it on social media with the hashtags #WorldElephantDay and #ToeGrey. They also asked for a donation to provide a pedicure to the elephants suffering from such issues.

Also, CBCGDF_China is celebrating this occasion by raising awareness on social media and sharing their progress in protecting our most intelligent friends. They are working to eliminate the international symposium on this elephant day, deny the elephant shows, and protect the endangered elephants in Asia and Africa.

Read more about: How to Conduct Environmental Awareness Campaigns?

On 12th August 2021, various organizations, along with the official page of World Elephant Day on Twitter, raised awareness about the activities towards Elephants worldwide.

One of those celebrations includes the celebration of World Elephant Day by AWF officials.

Further, on the event of International Elephant Day, the Guardian has shared another step towards Elephant conservation. A sanctuary is built in Kenya for rescuing orphaned Elephants, namely Retiti. It is considered the first indigenously run sanctuary for Elephants. And it has been working since 2016 to save and take steps toward the rehabilitation of young orphans.

On 16th August 2021, the Save The Elephants organization on their social media page showered gratitude for taking steps toward saving Elephants. Furthermore, they shared ways to help elephants get the life they deserve.

Besides, Dina Titus, a Congresswoman proudly representing the First District of Nevada in the U.S. The House of Representatives shared her love for Elephants by passing legislation to combat the trafficking of our beloved elephants.

There is more such evidence where organizations and individuals from different regions were shouting for enlightening the souls to save our intelligent and empathetic friends with the hashtag #worldelephantday.

On this 12th of August, if you want to contribute towards saving our loving elephants, visit the world elephant day website and take a pledge. Already, 22674 people have signed the petition to date.

HERD, an Elephant Orphanage in Africa, celebrates the world elephant day by sharing a slumber party with Elephants. 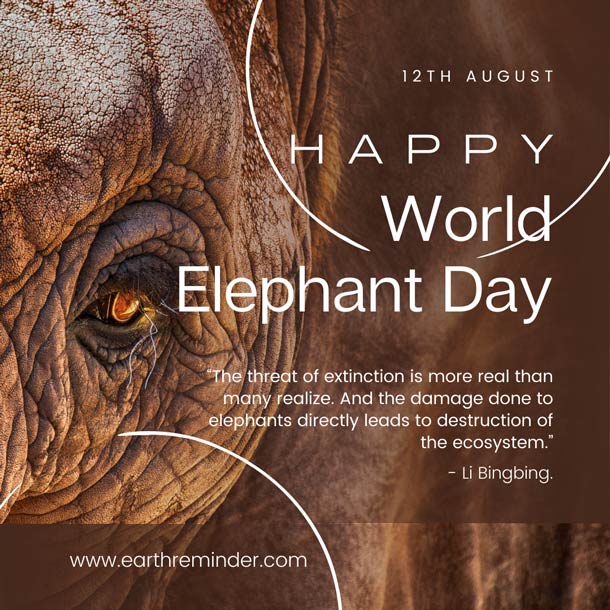 Sheldrick Wildlife Trust is observing world elephant day every day by working to rescue and save our Elephants, and one of those steps includes the rescue of Barnoti. He was orphaned on 4th April 2019 due to the unknown death of his mother. After aftercare and support, the organization saw some improvement in his health. However, he is not with us now but always stays in our hearts.

Further, this organization shouts for adopting a baby elephant to provide it love and life on the occasion of Easter. They state, “Make it less about chocolates and more about chocolate-colored Elephant this Easter.”

Besides, Wildlife experts are celebrating World Elephant Day by raising awareness about how Elephants are ill-suited to be kept inside a Zoo. For adding substance, a detailed report is prepared to acknowledge how Elephants get affected psychologically and early death when kept in zoos.

Several organizations agree with this fact and take steps toward providing Elephants with life outside of the Zoo atmosphere.

Another news shows a significant step towards celebrating World Elephant Day 2022. There are 500 Elephants to translocate from Botswana to Mozambique. The reason is the tuskless birth of female Elephants in Mozambique, which researchers are stating is a response to evolution.

With regular awareness and action, we can prevent the illegal killing of Elephants for ivory tusks and save their habitats from extinction.

How to Celebrate World Elephant Day 2022?

Our involvement is vital to make this day more unique which will show our consciousness towards these wild animals. Here are some ways to contribute your part to the WED anniversary.

World elephant day has originated to mark the plight of world elephants. Saving elephants from extinction is the main motive behind this day. We all must work together to protect elephants so that our future generations do not get to know about the largest land animal only from books; instead, they can experience the existence of elephants on their own.

How Does Air Pollution Affect the Animals?